Exploring the Midlands in Elden Ring is a jaw-dropping experience, but wait until you see this new REAL VR mod from master modder Luke Ross in action. Experiencing the brutal yet beautiful world of FromSoftware from the perspective of first-person VR will melt your brain faster than the searing breath of an angry dragon!

This latest update to Luke’s REAL VR mod is now available for download on his Patreon page and it is by far his most impressive work to date. Not only does this allow you to play through the entirety of Elden Ring in third or first person VR, it also comes with an easy to use quick menu that allows you to pause the game and modify the mod at any time in the game.

You can watch me make a whole host of wondering noises as I go face to face in the Elden Ring in this week’s episode of VR Corner, which you can find below these words. In this one, I try out a lot of third- and first-person gameplay in VR as I explore Limgrave, the lakes of Liurnia, and face off against Margit, Godrick, and even a few dragons. Oh, and I also use VR to accidentally discover one of Elden Ring’s best kept secrets – Torrent has a realistically modeled asshole hidden under his cock.

You can become invisible using the “Tourism” mode built into the mod. This will allow you to put your head in a dragon’s mouth and live to tell the tale.

Along with four different camera modes to choose from, including first-person and three third-person variations, Luke’s mod also gives you the option to slow down gameplay to make fast-paced battles a bit more manageable. The best addition in my opinion is the wonderful “Tourism” mode which makes you invisible to all enemies.

Fighting the enemies of Elden Ring in VR is an incredibly intense experience and in first person mode, boss fights are nearly impossible due to the speed and ferocity of the fights. With Tourism Mode enabled, you can roam the world at your own pace, soaking up the scenery and inspecting all enemies up close.

If you don’t have a solid set of VR legs, playing Elden Ring in first-person VR will have you hitting a bucket as soon as you make your first dodge roll. However, with Sightseeing Mode enabled, you are free to explore the world at your leisure and some of the places you can visit will leave you speechless. The view of the Lakes of Liurnia from behind Stormveil Castle was remarkable to me, as was the moment when I first opened the gate and emerged into Limgrave. Elden Ring already has these incredible, impossible, fantastical settings, but when viewed in three-dimensional VR, it brings them to life in ways I never thought possible. 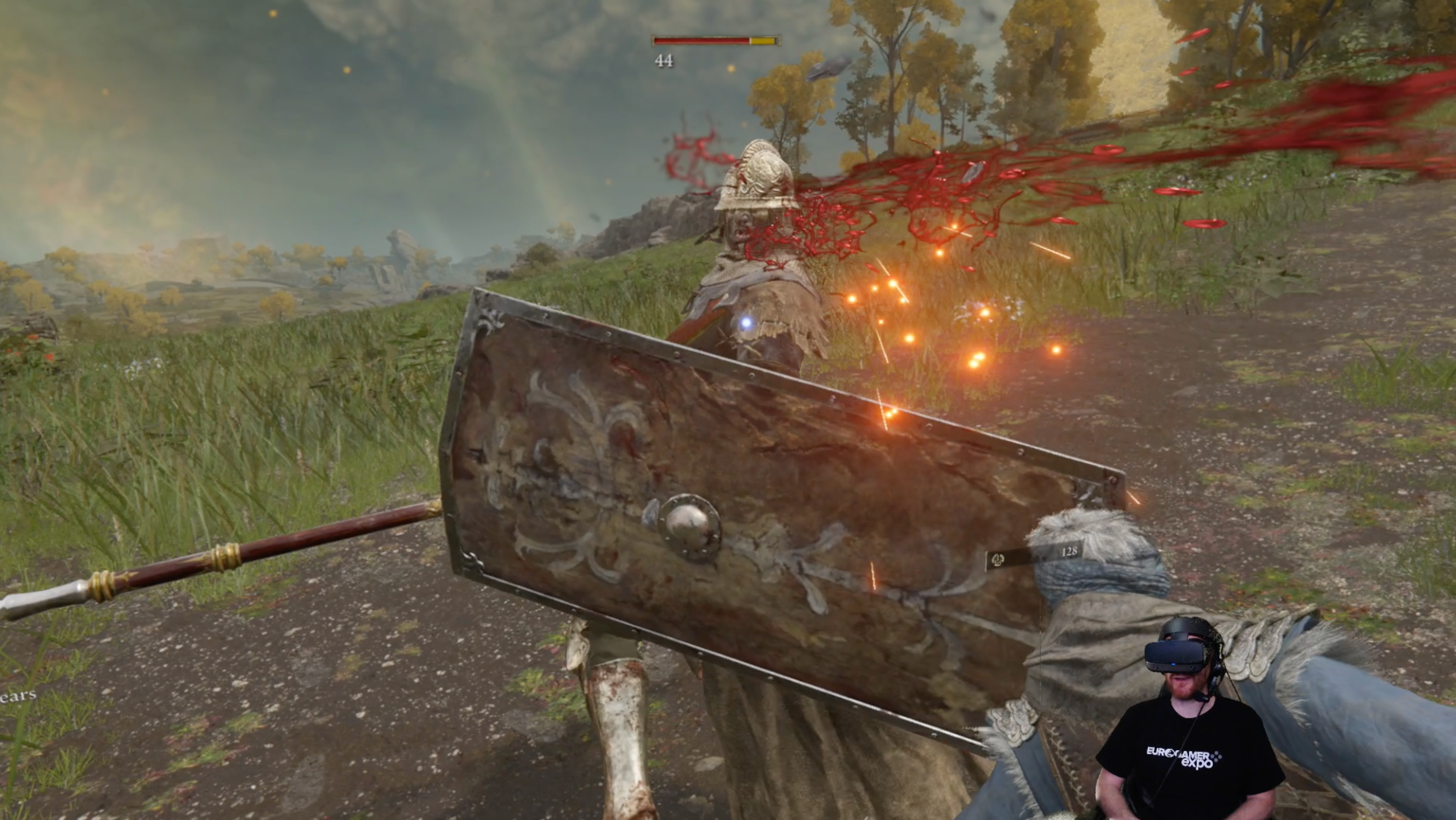 By adjusting the game speed, you can fight enemies in slow motion while the framerate stays smooth. It gives encounters an incredibly cinematic feel and keeps you one step ahead of your opponents.

One thing to keep in mind about this mod is that there are no motion controls present. Your head movement is tracked as it normally would be but, just like in previous REAL VR Luke mods, you have to control the game using a controller – just like you would when flat. Not a problem for me at all, but if you go into the mod expecting to physically swing swords or cast spells, Skyrim VR or Blade and Sorcery style, you’re going to be disappointed.

When Aoife Wilson rated Elden Ring for the site she gave it a well deserved Essential and I would say the same could be said for Luke’s mod. It’s still a work in progress and there are a few rough edges to iron out, but none of that takes away from the majesty of the experience. If you are a fan of Elden Ring and have the ability to play virtual reality on PC, you owe it to yourself to try this mod because there is nothing quite like the feeling of galloping between the towering paws of a dragon as it vomits fire. the top of your head.