I recently discovered that I’m on the far end of the micromanagement scale when it comes to Football Manager. Or perhaps more accurately, at the end of that scale, a spec in the distance visible only with the type of magnifying glass I use to inspect my player’s daily training habits. I’m the one you hear about with the spreadsheets and the 100% press conference attendance record, and while I’m not ashamed at all, it’s always made me a bit skeptical of handheld modes from FM, including recent Xbox versions.

However, after playing it for a few hours at developer Sports Interactive’s studios, the new PS5 version of FM23 puts me at ease. There are a few versions here, so for clarity, a quick little tour: Football Manager is the most comprehensive version, which you can only play on PC; FM Mobile is the lightest version designed for commuting and lounger gaming, with a heavily reduced feature set and systems; FM Touch is a slightly more in-depth version of FM Mobile, designed for the Switch; FM Xbox was introduced more recently and is a slightly deeper version of FM Touch, but still a far cry from full Football Manager.

This year, with the arrival of the PS5 version, things have been revamped a bit. The Xbox version is gone, and now there’s FM Console, which is the same on PS5 and Xbox (but Switch is still touchscreen). FM Console is definitely lighter than the full version, but also much, much closer than ever. In short, it feels like the main game, PC Football Manager, was the starting point here, with things tweaked to suit a console-style user experience, instead of being built off of the mobile version. outwards.

Here is a detailed overview of all the new FM23 features for the main PC version.

A console-style experience, in essence, means a bit simpler, a bit more intuitive, and a bit more active. Football Manager can be an overwhelming game for new players, but as Stuart Boyd, senior console producer, told me, it can also “be seen as a pretty passive game”, where you make your preparations, line up things how you like them, then start a game and watch your team. A few subs and sideline screams aside, it’s a mostly hands-off experience, which is odd for console gamers. “We wanted to try to make sure you had the controller in your hands, and so we took away, as I called it, the kind of cognitive overload that’s on screen – we kind of put that out of side and everything merged into the touchpad, so all the information is always there with just a click of a button, one click – bang – and you can get all the information and browse to whatever you want.”

“But also,” he continues, “there are also quick buttons for everything at the bottom.” The idea, he says, “is to make iot more platform friendly, increase usability and therefore increase the fun everyone is going to have.” This ties into an interesting thought that popped up when we were talking: consoles are normally hooked up to TVs, while Football Manager is often something people do alongside something else – sitting on the couch with a laptop with a laid-back TV in the background, making for a cup of tea as you move through the off-season.

But being on the only big screen in the living room means it has to justify taking the only TV in the house, so you have to feel like you’re playing it properly. “We want people to feel like, okay, something’s going on there, I can look at my touch pad, check out the stats, or I can do this key substitution where I feel like I have to keep the controller in my hands because the games are faster, faster, but I also know that I can find that solution there.”

The match engine looks smoother than ever and works well on the PS5.

With that in mind, Boyd also explained that it’s not as simple as starting with FM on PC and going back from there. Yes, that was the starting point in a sense, but his team, which was only formed in July of this year – as a dedicated group to focus on improving the console experience which only contains about a dozen people – instead started with several core “pillars” of what it’s like to play Football Manager, and decided which ideas could stay, and what should be changed based on that.

Most notable is the game’s integration. The game will walk you through the absolute basics – including the basics of football itself – based on how you answer questions about your experience when you start a save for the first time. Trophies and achievements have also been reworked, smartly, to be much more accessible from the start. You’ll get them for things like signing your first player, winning your first game, etc., as the team felt that this kind of reward system would help new players, who might get overwhelmed by the depth of FM, to stay engaged and encouraged enough to keep moving forward. Accessibility has also been a focus, with things like improved colorblind support for “the majority” of colorblind users, including deuteranopia, protanopia and tritanopia, and levels of strength within them. 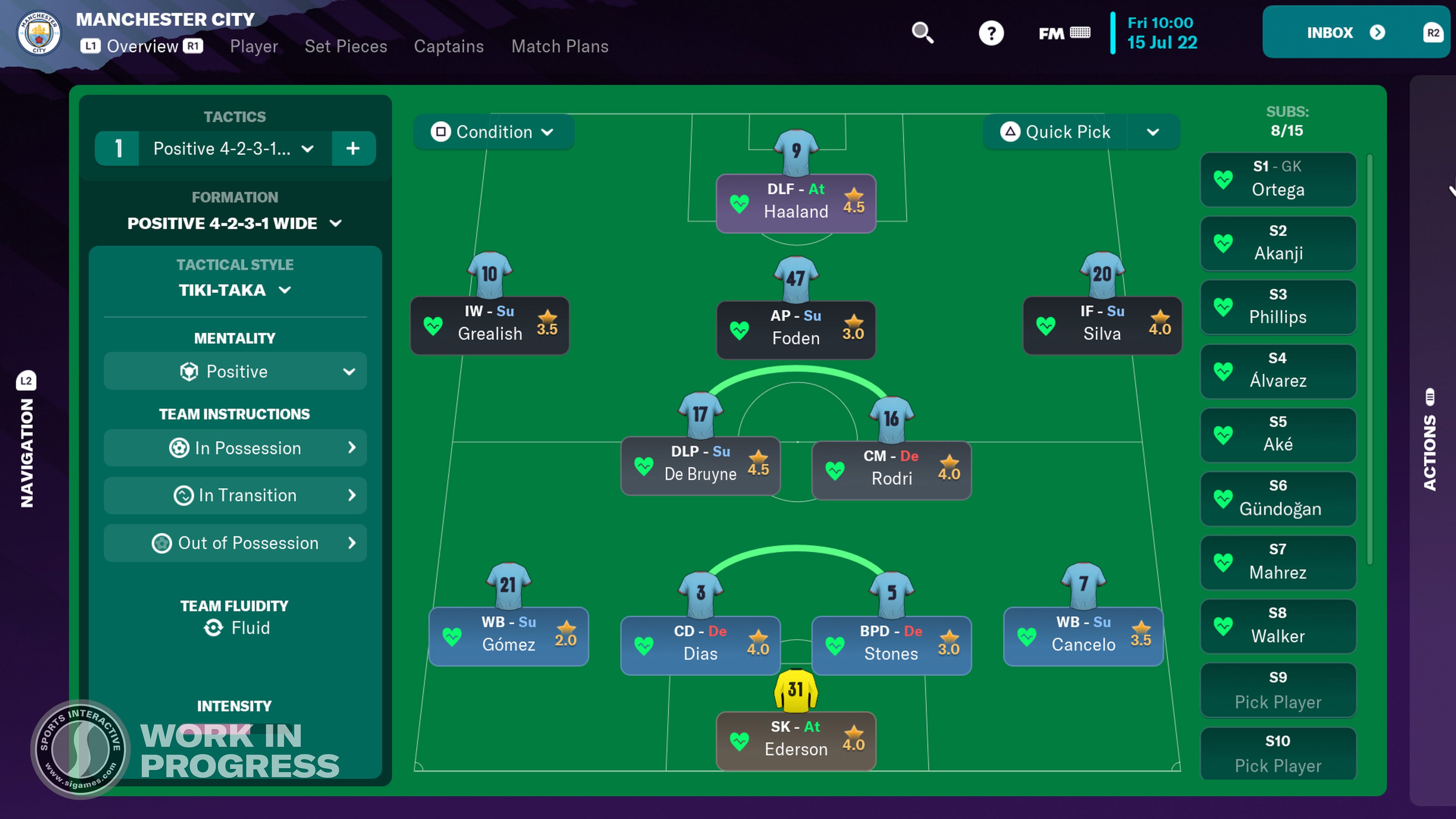 Sega have kindly provided this Manchester United fan with screenshots of the Man City squad, so well done.

By far the biggest hiccup, meanwhile, is the control system. Moving such a heavily menu-based game like Football Manager to a controller feels like a nightmare – Sports Interactive has largely done a good job of separating menus and sub-menus into navigable areas between them with different buttons. Personally, I’ve always found it difficult to move around the game using the controller buttons, especially with the really tricky parts of micromanaging like setting individual tactical instructions, where full-page option screens are sorted with a click of the mouse. Getting in and out of so many sub-menus and sub-sub-menus with a variety of different button clicks was hard work, to the point where I just stopped bothering – a real hiccup when it comes to the details finest is part of the draw for FM fans like me.

Until I discovered the slider, which was a bit under-advertised when first setup. Clicking the left analog stick gives you a fully usable PC-style mouse cursor, and from there navigation is a dream, best of my Claudio Ranieri DIY options back on the table. For accessibility it’s great to have two different control options, but in practice both are really day and night. After discovering the FM Console Slider is a vastly improved experience, one you can immerse yourself in decision making with close attention, following hyperlinks to the facilities page of a club that has offered to lend your youngsters to check the quality of their training ground, to inspire individual players to soften tackles after picking up a yellow card, to throw individual shouts on the touchline and, more gloriously, to hover over things to read the info -bubbles, which in games like this is hard to do without. 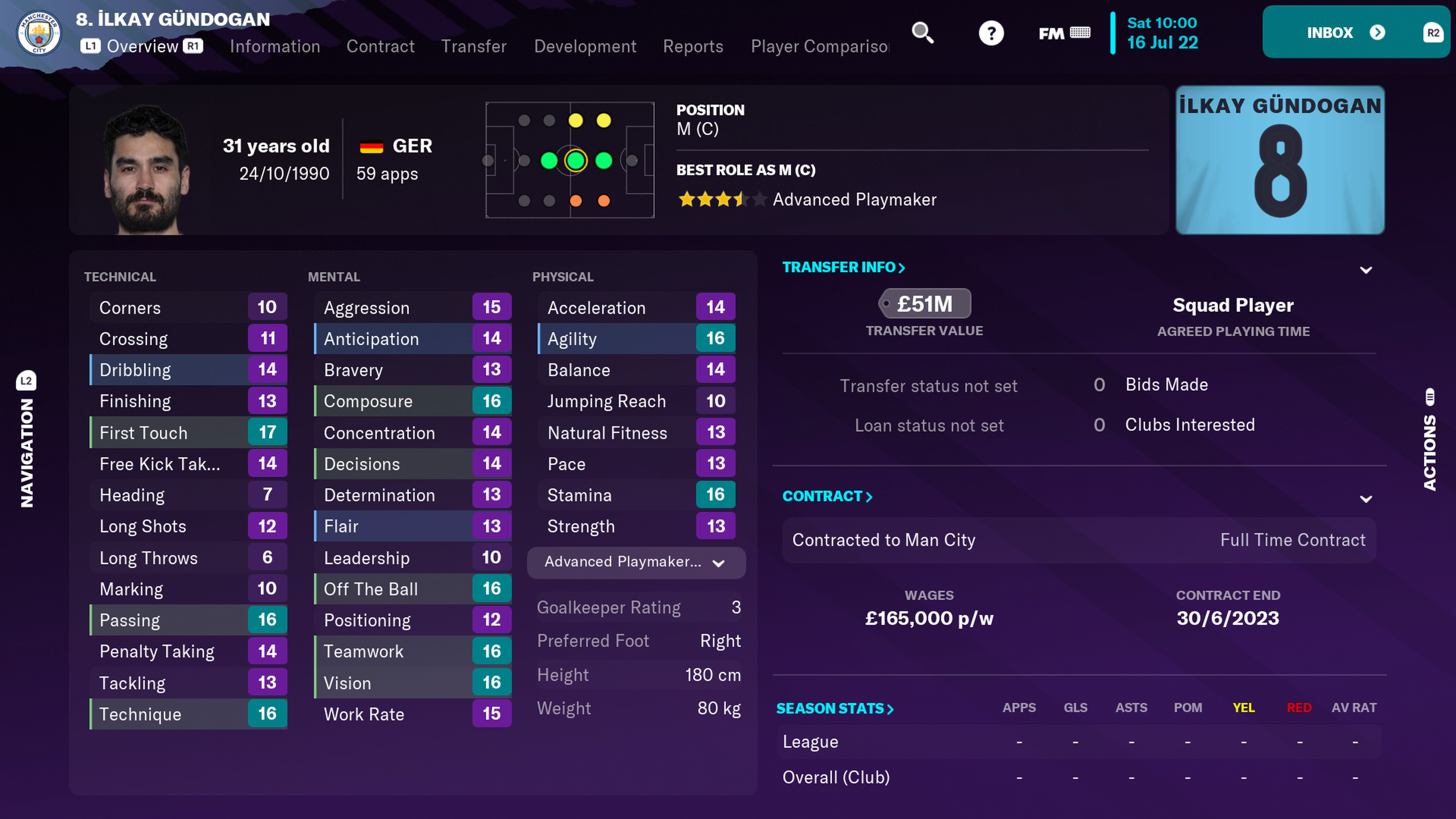 Things are slightly condensed next to the PC version, but less than you might expect.

There have been some improvements to the descriptions themselves in the UI, something from the main FM23 release that made it to consoles (not all new features do – recruiting is more of a “light of recruitment” in FM Console for example, when it’s had an overhaul to add even more detail this year on PC). This year the tactical descriptions have been improved to be more intuitive for regular football fans – things are called “low blocks” and “medium blocks” for example, then with the slider active these tooltips are elaborated more in detail. The match engine also seems improved, much smoother than last year’s version, and the game itself runs at a good pace on the PS5, probably thanks to that SSD – I wanted to add about eight countries and a couple of leagues from each when setting up my backup, to see how it could handle one with what I would personally consider the minimum depth. Load times were faster than FM22 on my PC.

The PS5 version of FM Console left a good impression, in other words. The FM console is in a strange place. I would still recommend the full PC game because that complexity and depth of simulation, for tinkerers like me, is really what Football Manager is all about. And while it blows the portable versions out of the water, it’s not portable, so it serves a different purpose. I suspect the real focus actually comes down to integration: if you’ve never played Football Manager before, and you’re picking it up for free as part of Game Pass or just have a PS5 to try it out, I bet it’s “It will prove to be an exceptional introductory drug, teaching you the basics and guiding you through the big defining moments of any FM career. But if you have a choice, I would always say jump straight to the difficult things.