I’ve been into racing games since the beginning. The first game I bought was Need for Speed ​​2 when I was in third grade, and I have so many fond memories of playing it with my brother and dad, pressing arrow keys to steer sleek sports cars around opponents, corners and obstacles, racing a Ferrari F50 through the backcountry or a McLaren F1 somewhere pretty in vancouver.

These days I live on a different continent than the house I grew up in, I write about computer games for a living and everything seems to get a little crazy in the world – but I still meet my brother for play racing games. But instead of huddled around the family computer, waiting for the CD drive to wind up and load the next level, we’re playing on a modern game console with the kind of photorealistic graphics that Need for Speed ​​2 has in my memory… but definitely not if I go back to check.

The release of Gran Turismo 7 – and the unprecedented excitement of the 2021 Formula 1 season – have made me want to take things a bit more seriously. So earlier this year I ordered Fanatec’s DD GT Pro, a set of wheels and pedals built around a modestly powerful yet sophisticated direct-drive system that’s supposed to offer more detailed force feedback. and realistic than cheaper belt driven wheels.

Here is the Fanatec DD GT Pro! The Gran Turismo wheel doesn’t look as professional as something like the McLaren CSL Elitebut the motor and pedals are legit.

There are only two pedals and no gear lever, but the level of realism it instantly provides is immense – especially compared to the $20 wheel I used for an old MotoGP game when I was as a child, and to the slightly less flimsy Logitech wheel that my housemates were playing Gran Turismo 5 on. Suddenly it feels like real racing – the only problem is that mounting the wheel on a desk and setting your “racing style” chair to its lowest setting leaves you in a very awkward position. My feet, already sore and inflexible on the best days thanks to a quartet of childhood surgeries, started cramping before I reached the corkscrew of Laguna Seca. I knew then that I had to go all the way…and choose a suitable racing seat to mount all this fancy kit.

My research identified two potential candidates in the surprisingly crowded “simulation-style-racing-cockpit” market: a £180 collapsible unit called PlaySeat Challenge and a £645 metal cockpit called Next Level Racing GTtrack. The PlaySeat would take up much less space, folding under a desk, but the GTtrack would offer more stability and adjustability. I couldn’t decide between them, so I pulled out a few feelers and tried to see if either company would send me one to test. 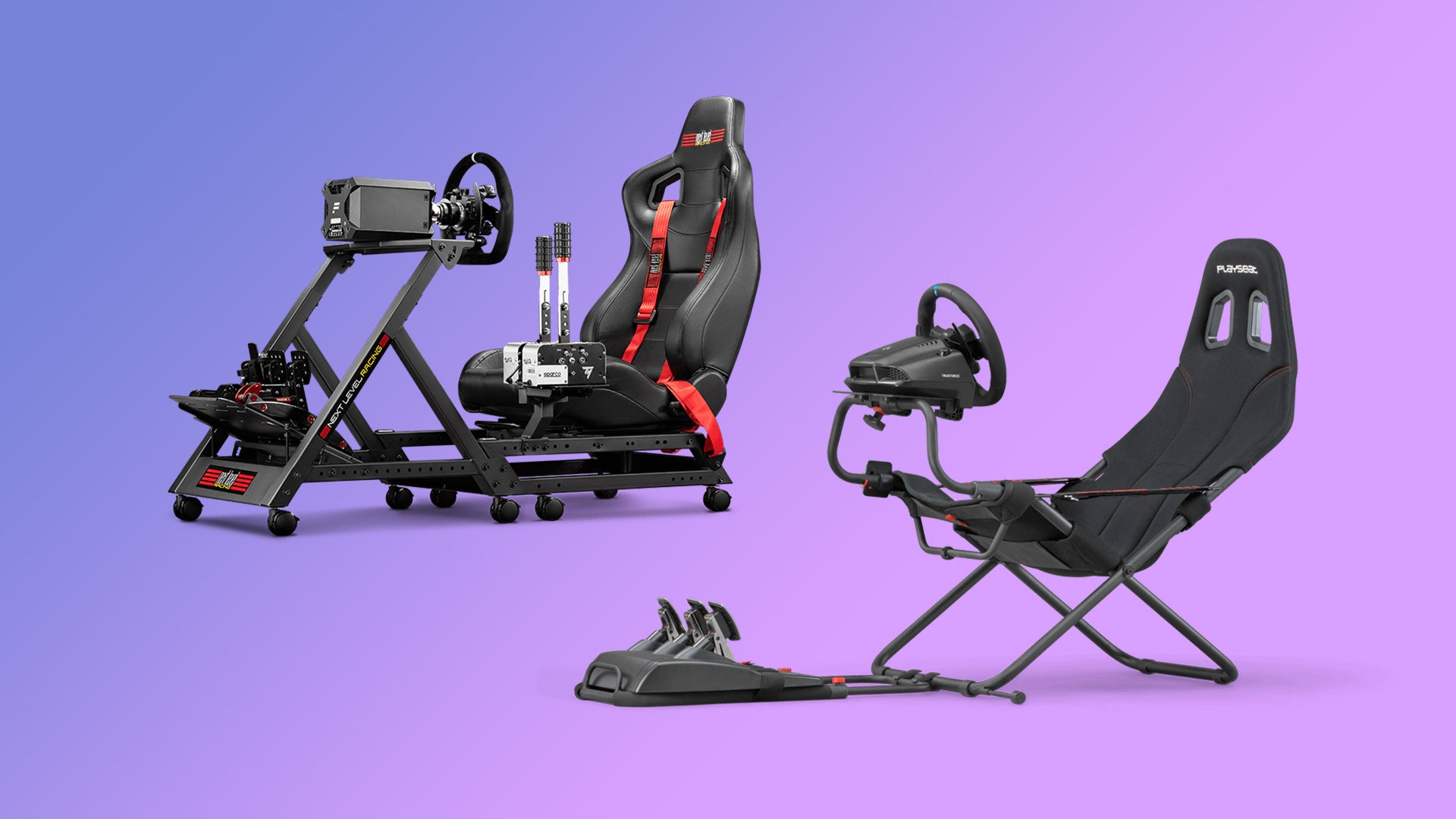 To my immense confusion and surprise, both companies did, thanks to the efforts of a former colleague in the UK retailer Box’s marketing department. The PlaySeat was a pretty straightforward delivery, arriving via one of the usual couriers, but the Racing Extreme Pro was something else, coming on a pallet and requiring significant effort to slide it into the living room. I spent a blissful couple of hours setting it up – luckily all the instructions made sense and most parts were fastened together with reassuringly thick metal bolts – then I spent another half hour fixing the steering wheel and pedals, which of course required me to get the steering wheel and pedal box out of the shed to retrieve one piece or another that I thought I would never need. With that done, I started GT7 for my first real spin on the wheel.

It was damn brilliant. The seat’s more reclined racing position immediately made things radically more comfortable, and the included seatbelt (!!) provided both unrivaled levels of immersion and an ergonomic benefit (strictly enforced). The wheel was a bit too high at first and the pedals too close, but within a few strokes (and with a few sets of bolts removed and replaced) I had a setup that was as comfortable to drive as my actual road car (13 year).

There are two big advantages of a proper racing setup like this over driving with a controller (or even a keyboard, as I did for most of my “racing” time). The first is that you feel much more connected to the road – the vibration of the steering wheel gives you a good idea of ​​the grip available, letting you know when you can push harder or where you’re just about to lose some traction. traction . There’s definitely a period of adjusting gamepads, where you end up being a lot slower because you’re unfamiliar with the gear, but in theory the ‘skill ceiling’ should be a lot higher on a setup like this; you should be able to produce better and more consistent lap times because you have access to more information.

The second major benefit is that you feel really cool the whole time you do it. Alright, so maybe you’re not feeling cool when you’re breaking away from a virtual endurance race, dripping in sweat, having gotten nothing more than a bit of virtual currency in your racing fantasy of choice, but the instant action of driving a car on a track with a steering wheel and pedals is really fun. Likewise, when people come to visit your office and see a racing setup, they’re full of questions and want to try – which is awesome! Racing is one of the few genres that, so faithfully mirroring its real-life analogue, you don’t need any gaming experience to try and even enjoy. 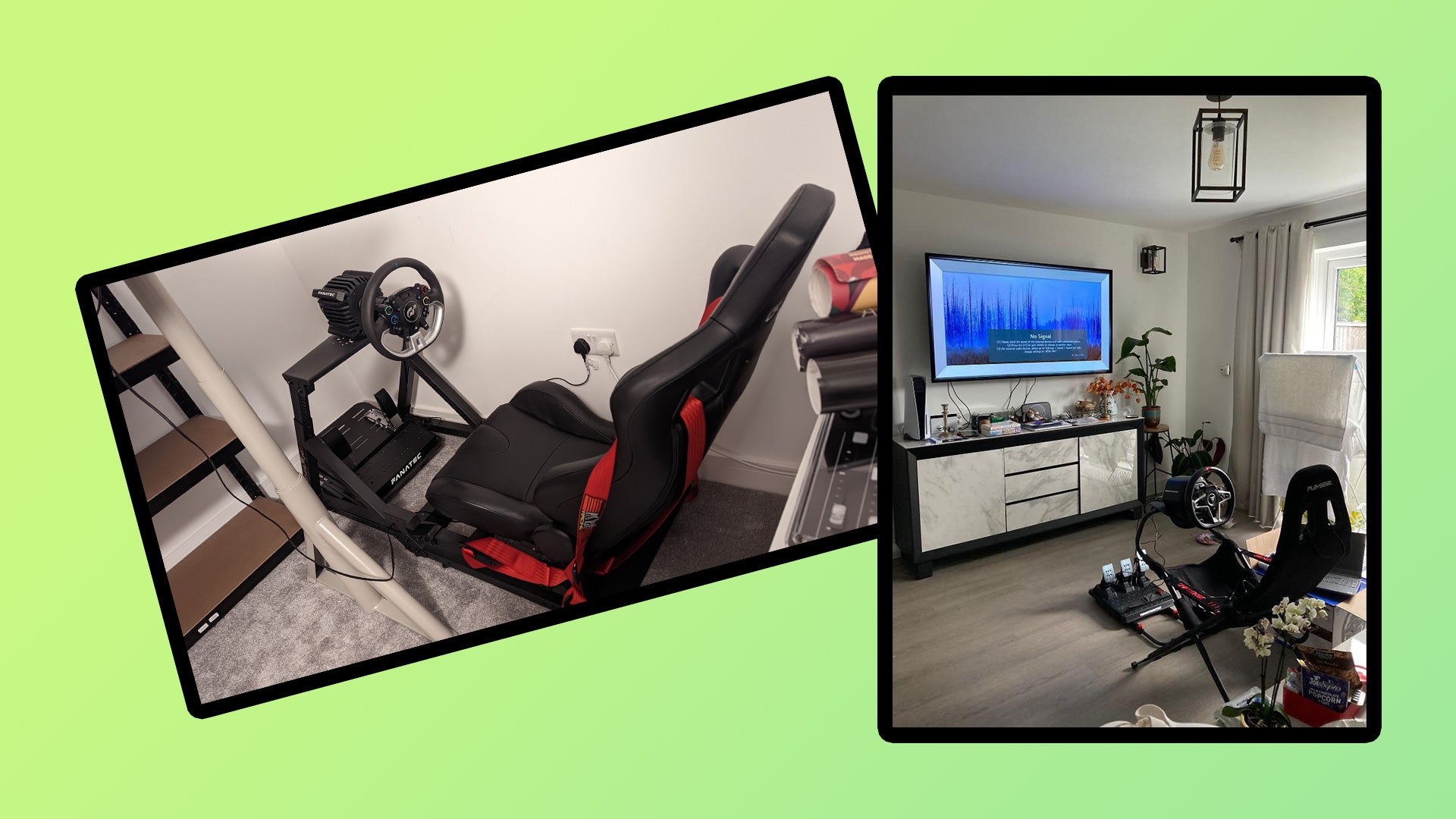 In-situ racing chairs – with the Racing Extreme Pro shown without the Odyssey G7 monitor and monitor arm used in the final configuration.

The main downside to having a large racing setup in your office – beyond the obvious distractions it provides – is that it takes up an awful lot of space. I’m lucky to have a decent sized room in my house for an office, but I didn’t realize how inconvenient it would be to squeeze a 138cm long, 120cm high and 55cm tall cockpit wide among my existing bookshelves, desks and games. chairs. I kind of assumed I could slide it under a desk or something, but the relatively high chair and raised wheel mean there are two ‘high spots’ here; you can slip it under a standing desk, but there’s no chance of slipping it under a desk where you intend to sit. The GTtrack comes with wheels – and glides well enough across carpet without them – but it’s heavy enough that moving it around isn’t something you can easily do multiple times a day.

Of course, that brings us to the PlaySeat challenge – which costs a lot less, but ultimately fit much better into my life. The idea here is that the whole thing folds up, so you can store it under a desk or just against a wall. I was worried it would be a bit unstable with everything mounted, but I think the 5Nm of torque the GT DD Pro provides out of the box (and the weight of the unit) is just enough to be manipulated by the seat without feeling completely unstable.

The Challenge is actually quite comfortable once you’re in it, with a relatively airy design that keeps you cool in the summer, and there are a few nice touches here – like a stabilizer leg that keeps the chair from tipping over when you turn the support wheel away to stand up or sit down. Feels a little confined, and the level of adjustability is nowhere like the GTtrack, but it’s perfect if you don’t have a permanent play area as you can leave all your kit set up on it and just fold it up when you are done playing. You can even do things like bring it downstairs to play on the big TV, or even at a friend’s house, which just isn’t feasible with the larger racing cockpit.

Again, I think it speaks to the social aspect of running that is important to me; it’s fun to race and improve, but even more fun to introduce the idea of ​​simulator racing to your friends and family and laugh with them because everything inevitably goes pear-shaped.

On a related note – Outside Xtra’s racing academy videos capture this social element perfectly; watching Mike, the father of running, cheering on Luke, the fast-improving runner, is exactly the kind of vibe I enjoy.

So that’s where I’m at right now – having a great time playing F1 22 and Gran Turismo 7 with the Fanatec GT DD Pro and Next Level Racing GTtrack (which I rearranged my entire desk for the adapt), and loan the PlaySeat Challenge to my neighbor for his own GT efforts. The simulator is always a point of interest for visitors to the office, and people trying it out has led to some brilliant times.

I’d like to keep evolving the setup over time – maybe a load cell brake pedal, monitor mount, fancier carbon fiber wheel, shifter? – but I’ll take advantage of what I have for now. It’s one of those hobbies that you can very easily invest a ton of money in, and just having a comfortable steering wheel, pedals and seat that I can share with my friends and family is already a childhood dream come true.