Yesterday, as part of The day of the last of uswe were treated to the first full trailer for the franchise’s upcoming HBO adaptation, starring Pedro Pascal as Joel and Bella Ramsey as Ellie.

This trailer didn’t have any real dialogue between the characters (there were a lot of strained stares and a few furtive shh-ings), but it still offered an evocative picture of the world HBO has created for its TV audience. You can see that trailer for yourself below.

The Last of Us HBO trailer.

Right off the bat, it’s clear that HBO took this adaptation seriously, with several scenes looking like they were pulled straight from Naughty Dog’s video game series. There’s a lot to unpack in about a minute and a half of footage, so let’s get to it.

The trailer begins with Joel in Boston. The streets here are weathered and battered, just as they are in the game, following the Cordyceps outbreak 20 years prior.

Details pulled straight from the game here include signs enforcing citywide curfews in place and locals painting over a Firefly symbol under Fedra’s watchful gaze.

Curfew signs in the HBO trailer. 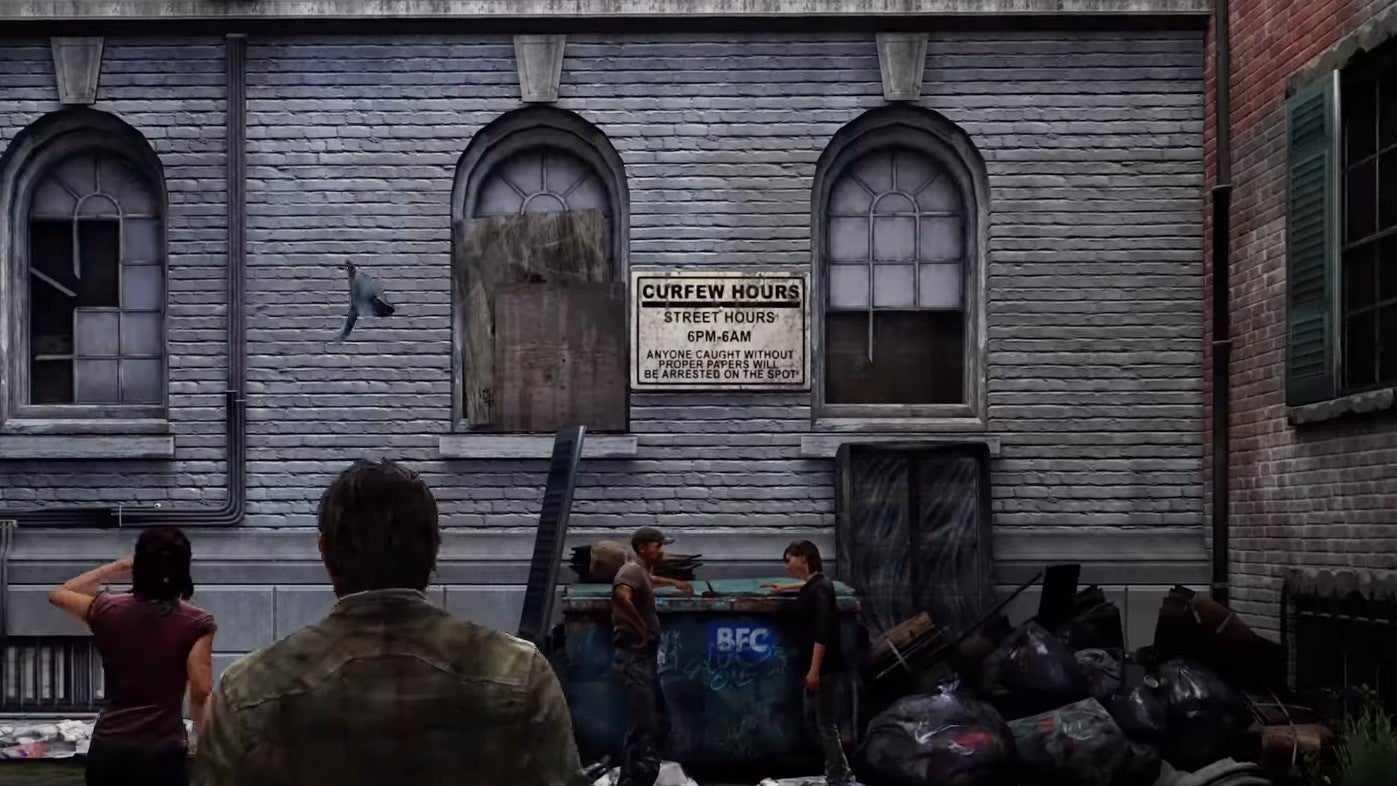 Curfew signs in The Last of Us game. 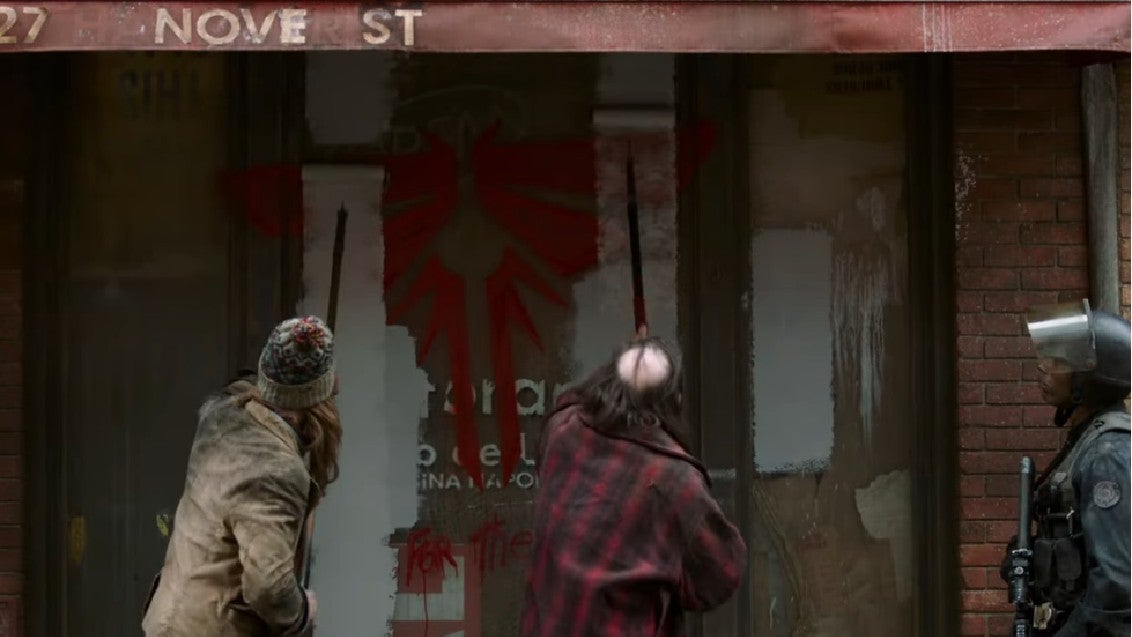 Civilians paint a Firefly sign and “seek the light” graffiti in HBO trailer. 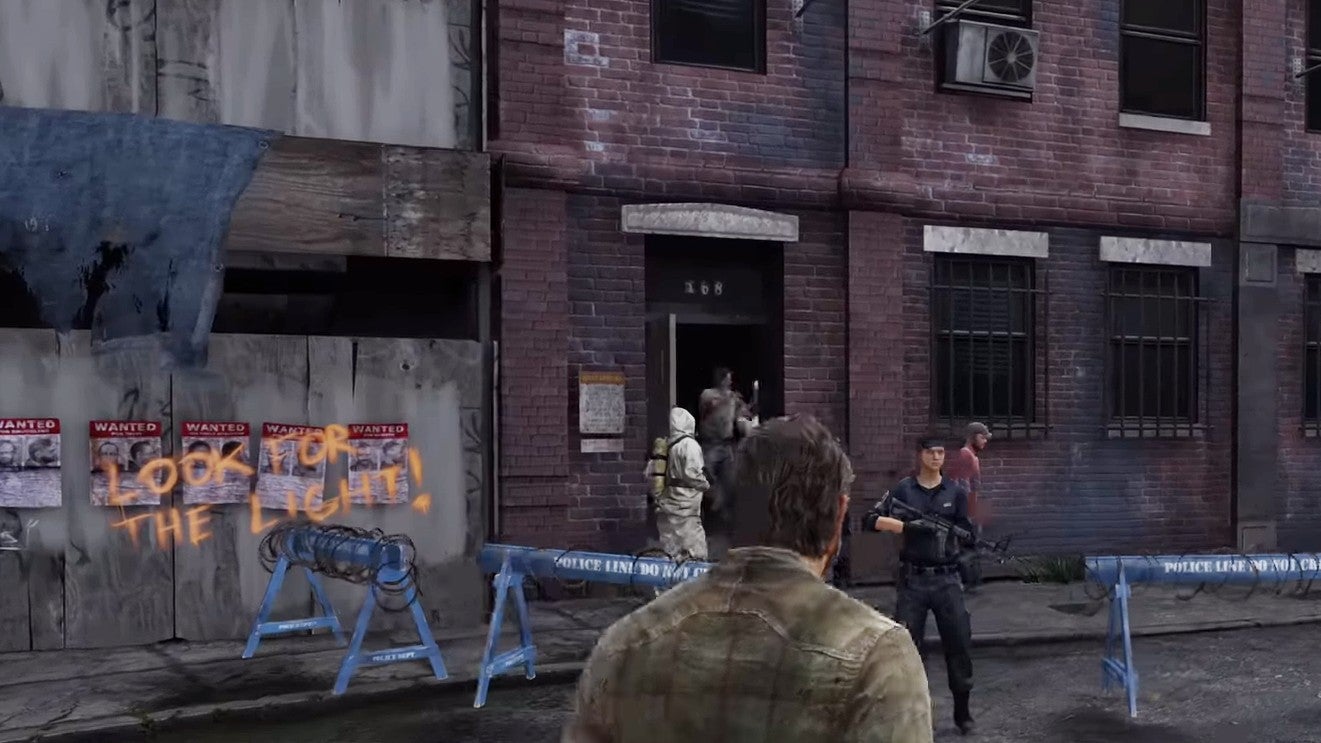 “Seek the Light” graffiti seen in The Last of Us game, featuring the presence of Fedra’s Militia.

The next image shown in the new HBO trailer is of Joel’s watch, which those who have played the game will know is a gift from his daughter Sarah.

As you can see in the photos below, the cracks and bullet holes are pretty much an exact replica of the ones in the game when placed side by side. 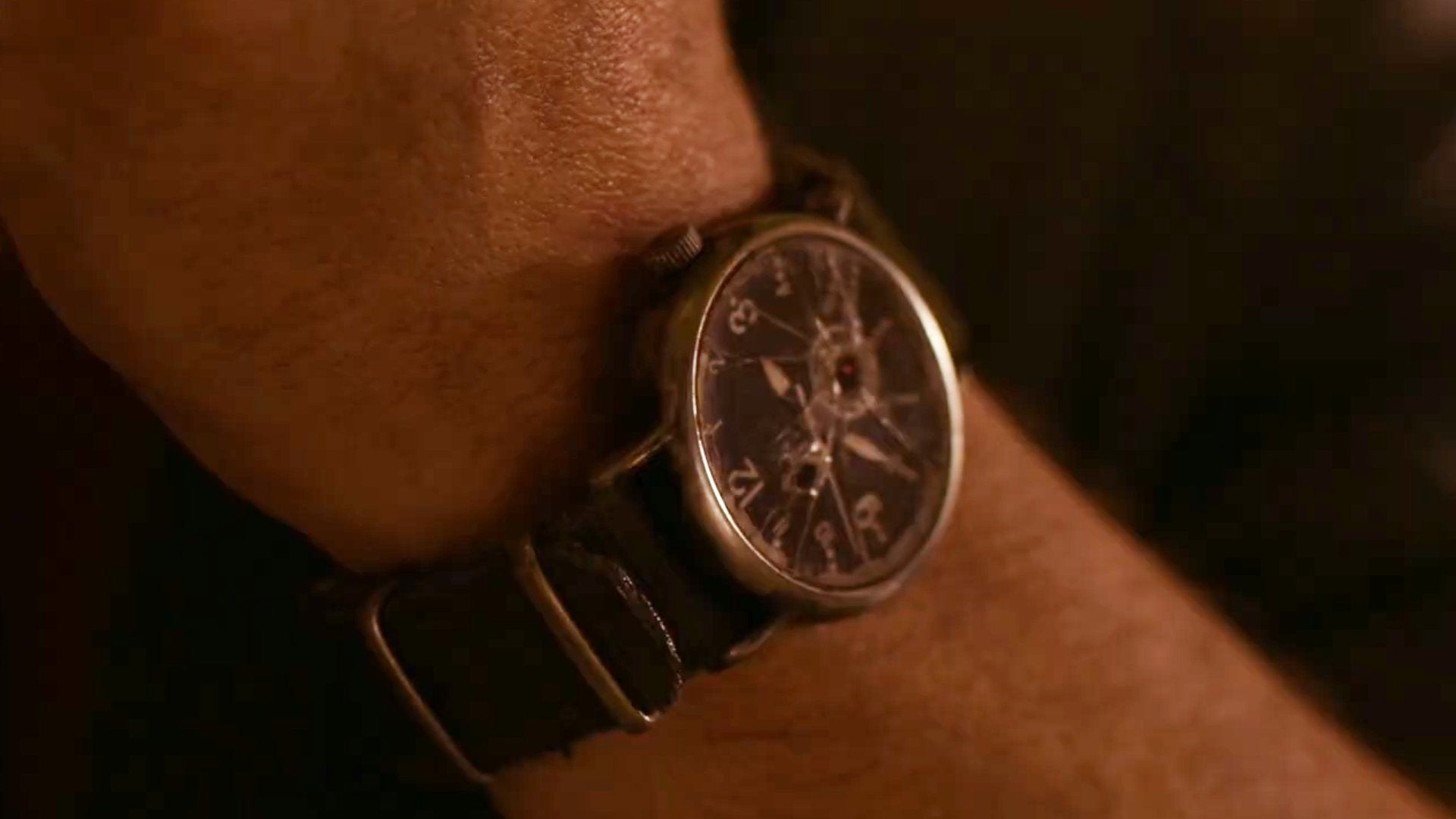 Joel’s watch on the show. 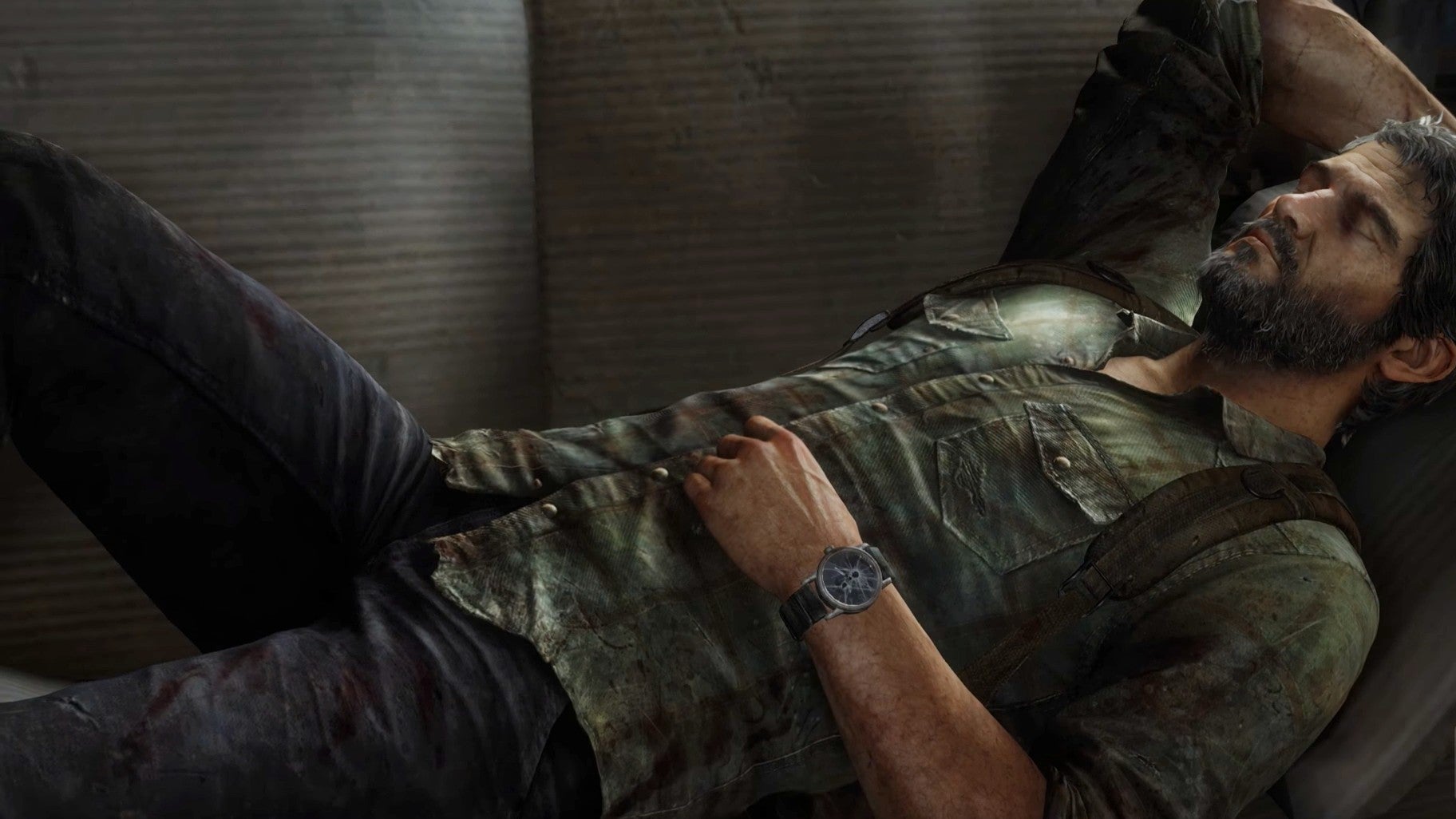 Going a bit deeper into the game’s story, scenes from the HBO trailer show Joel, Ellie, and Tess (played by Anna Torv) hiding in the tunnels around Boston, just like they do in the game after they were discovered breaking curfew by Fedra. 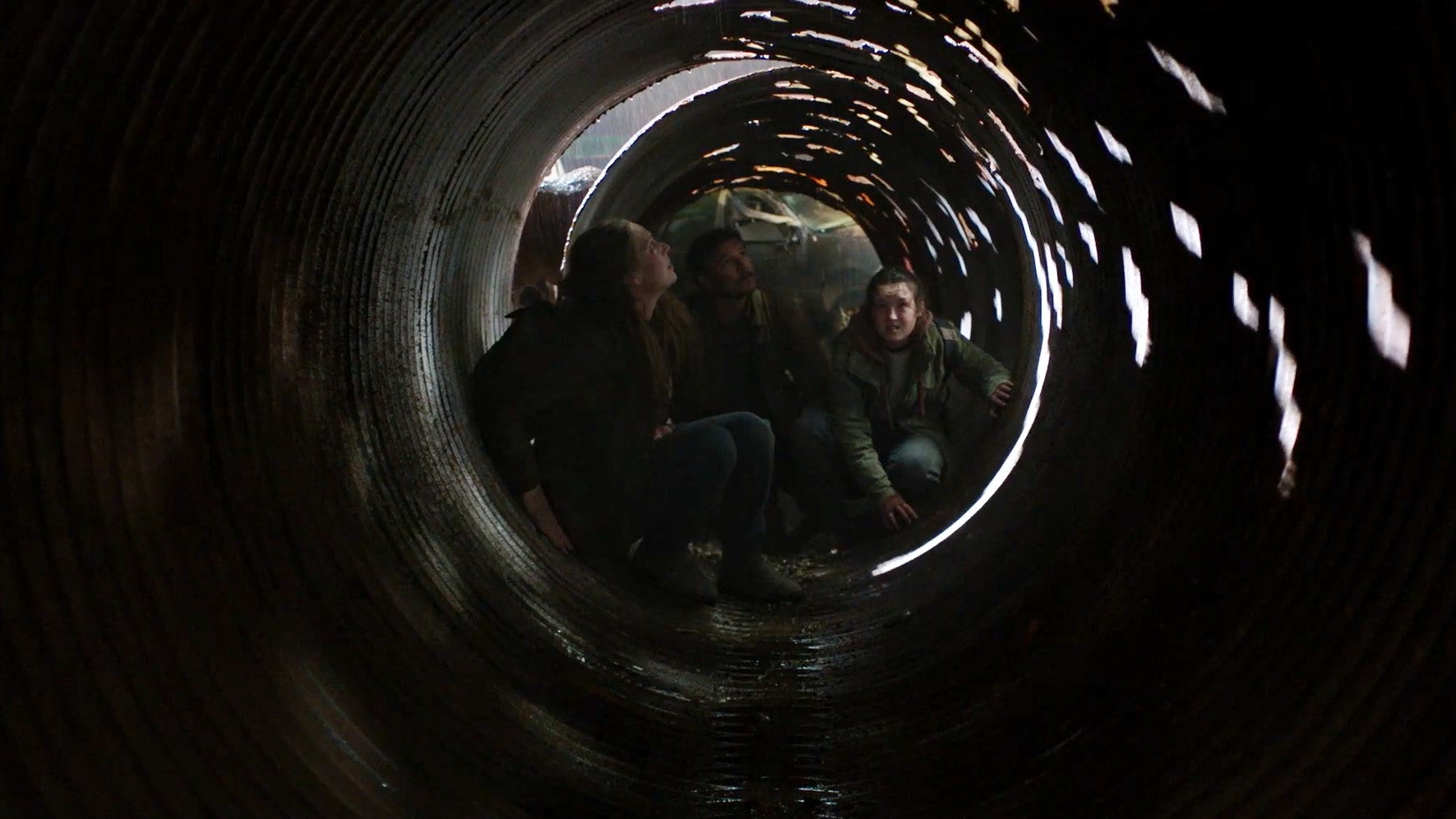 Joel, Ellie and Tess are hiding in the tunnels around Boston. 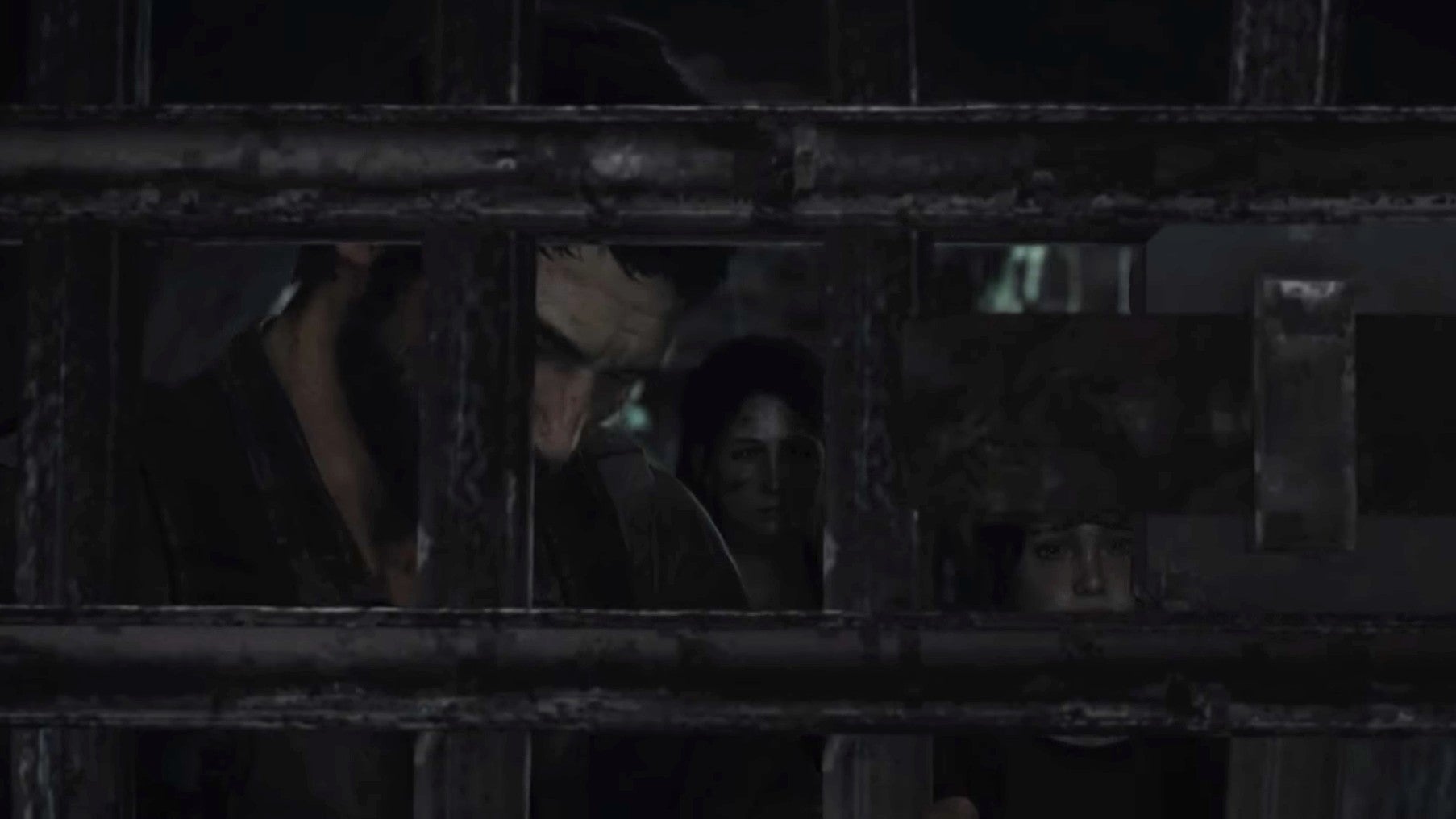 Joel breaks Ellie and Tess out of the game’s tunnels.

We also get an accurate recreation of the game’s stunning tower featured in the HBO trailer. 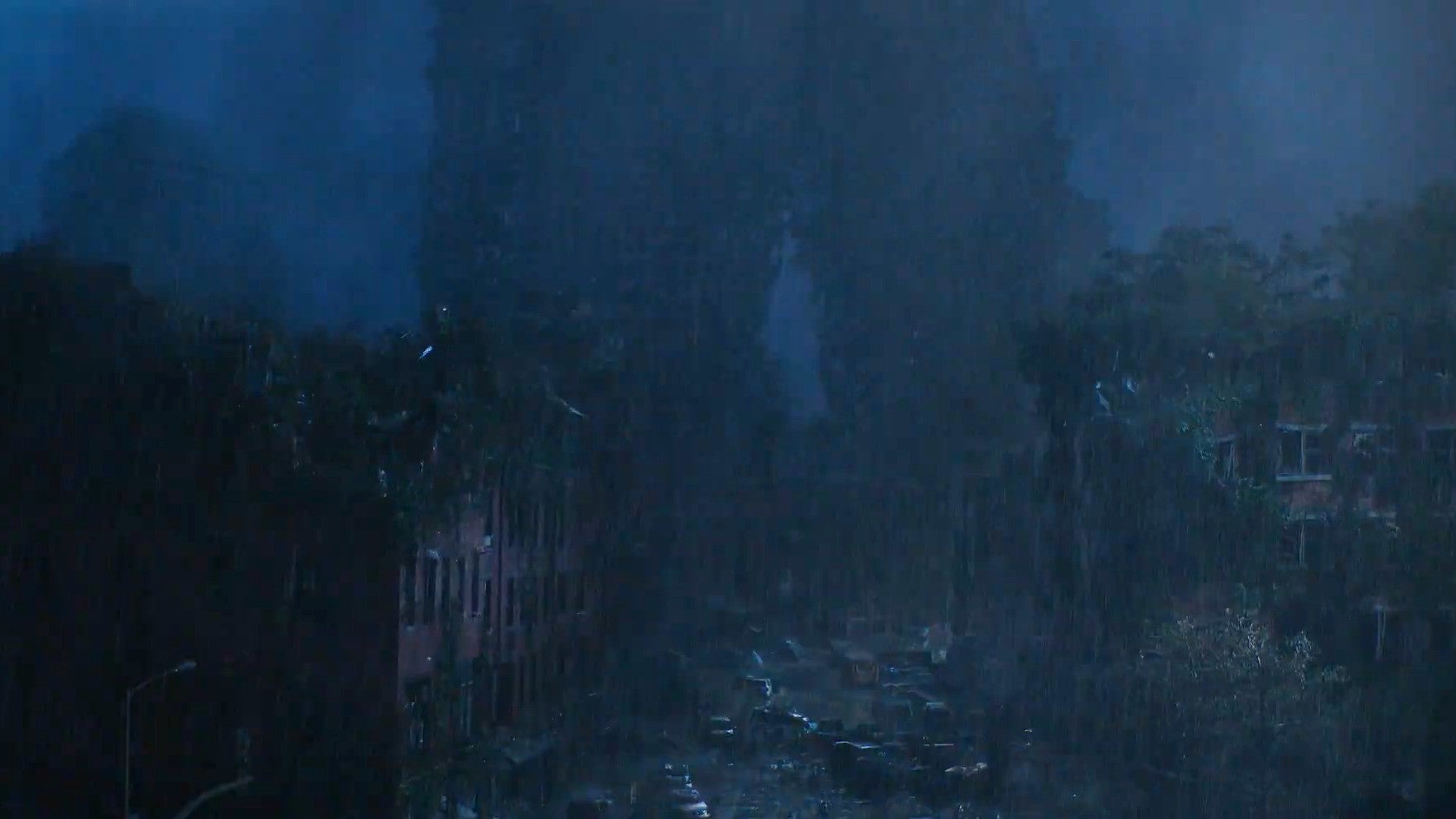 The collapsing tower can be seen as a thunderbolt. 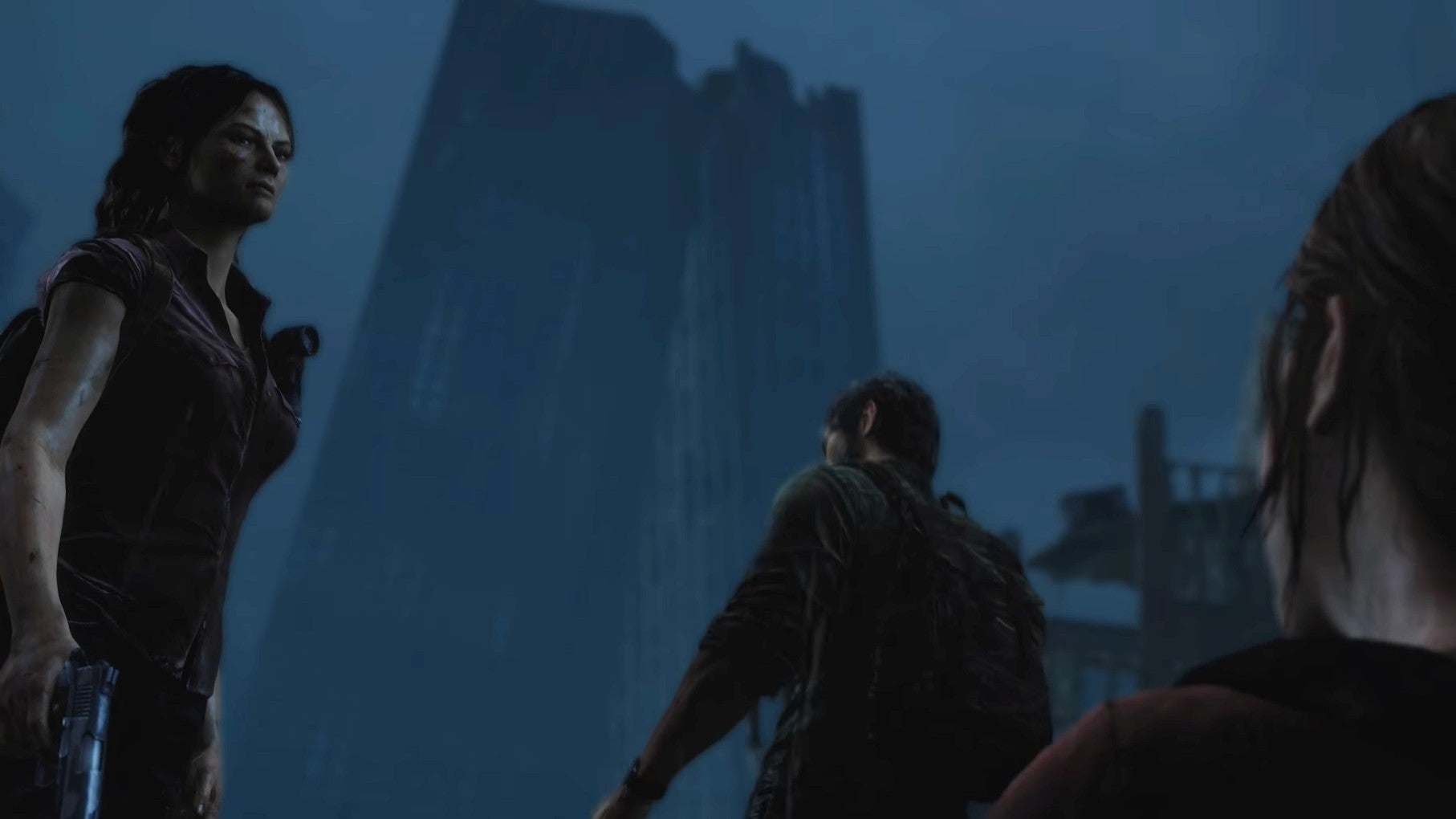 The same towers can be seen behind Tess in this photo from the game.

We also see that Ellie and Joel will be crossing America partly on horseback, just like they do in the game. 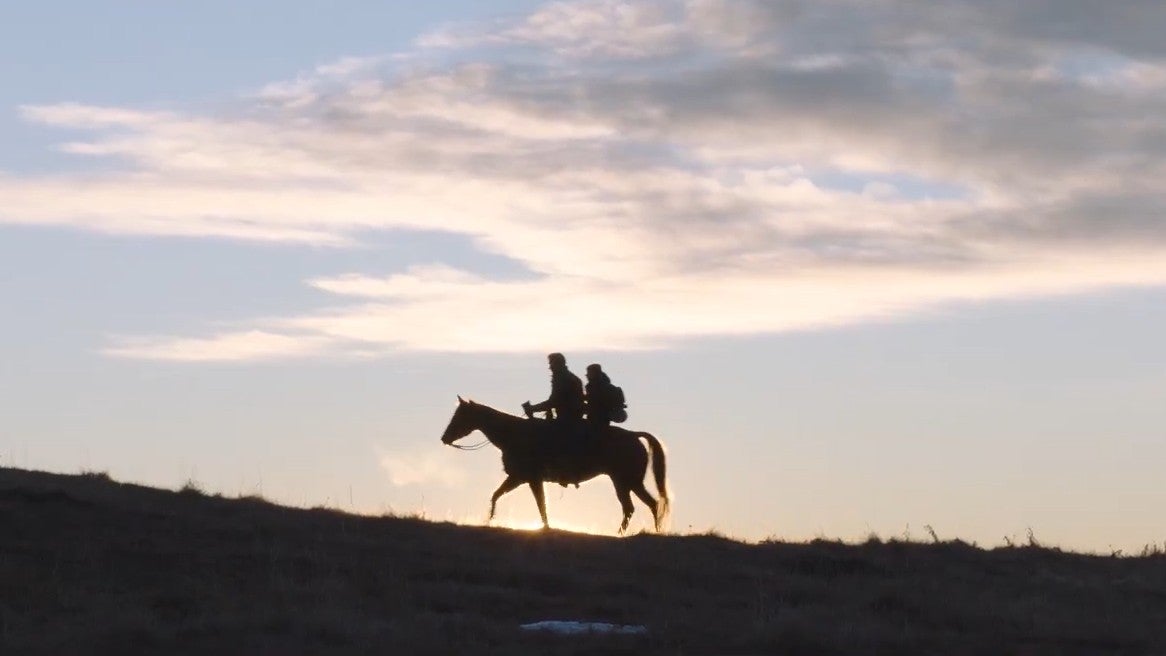 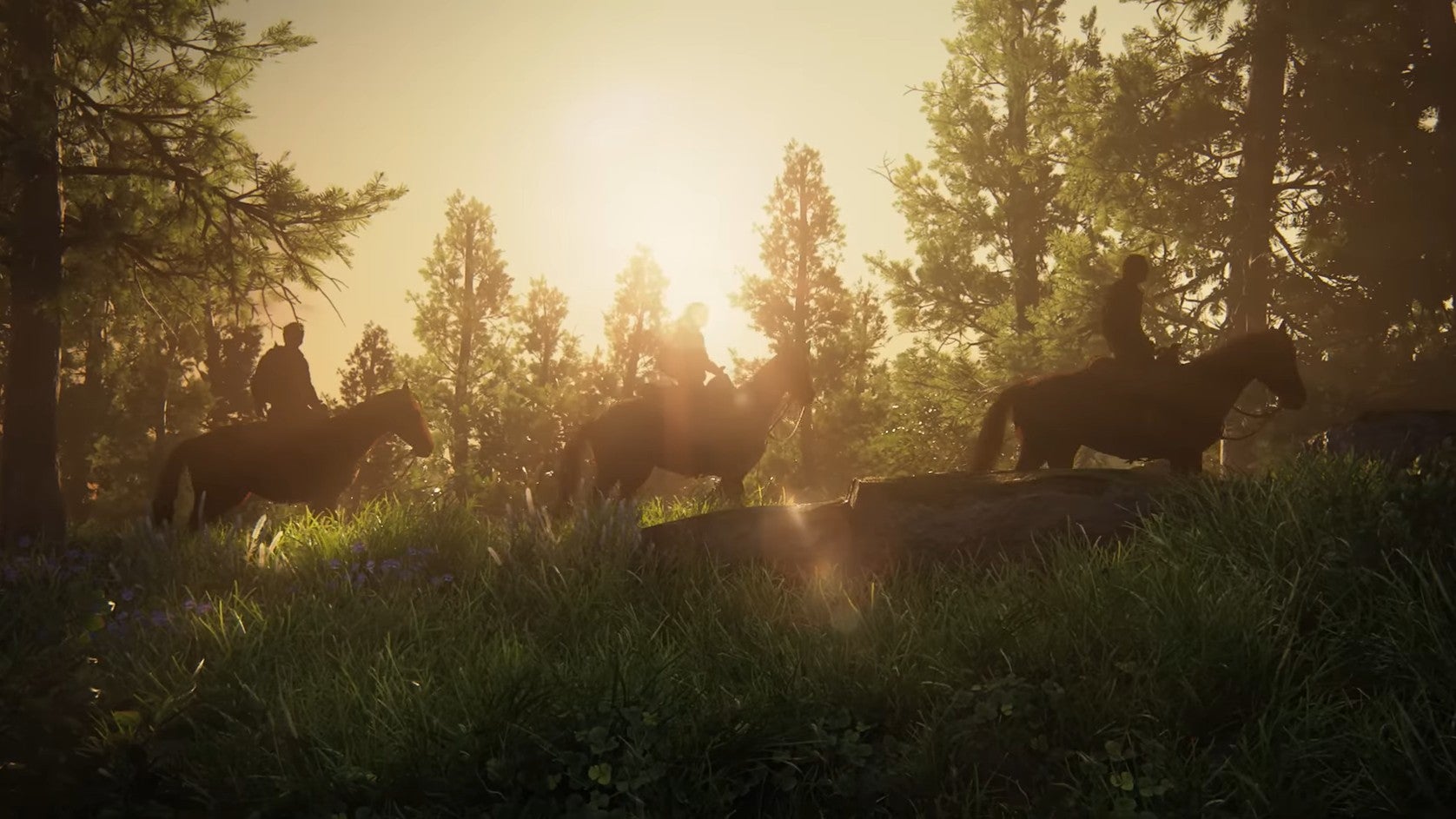 Separate horses in the game, although they also share a mount in some parts.

Another scene that’s been recreated in painful detail is from the very beginning of the game, where players see Joel running away from Austin with Sarah. It’s a truly heartbreaking moment in the game, and I’m sure it will bring me to tears once again when the series releases next year. 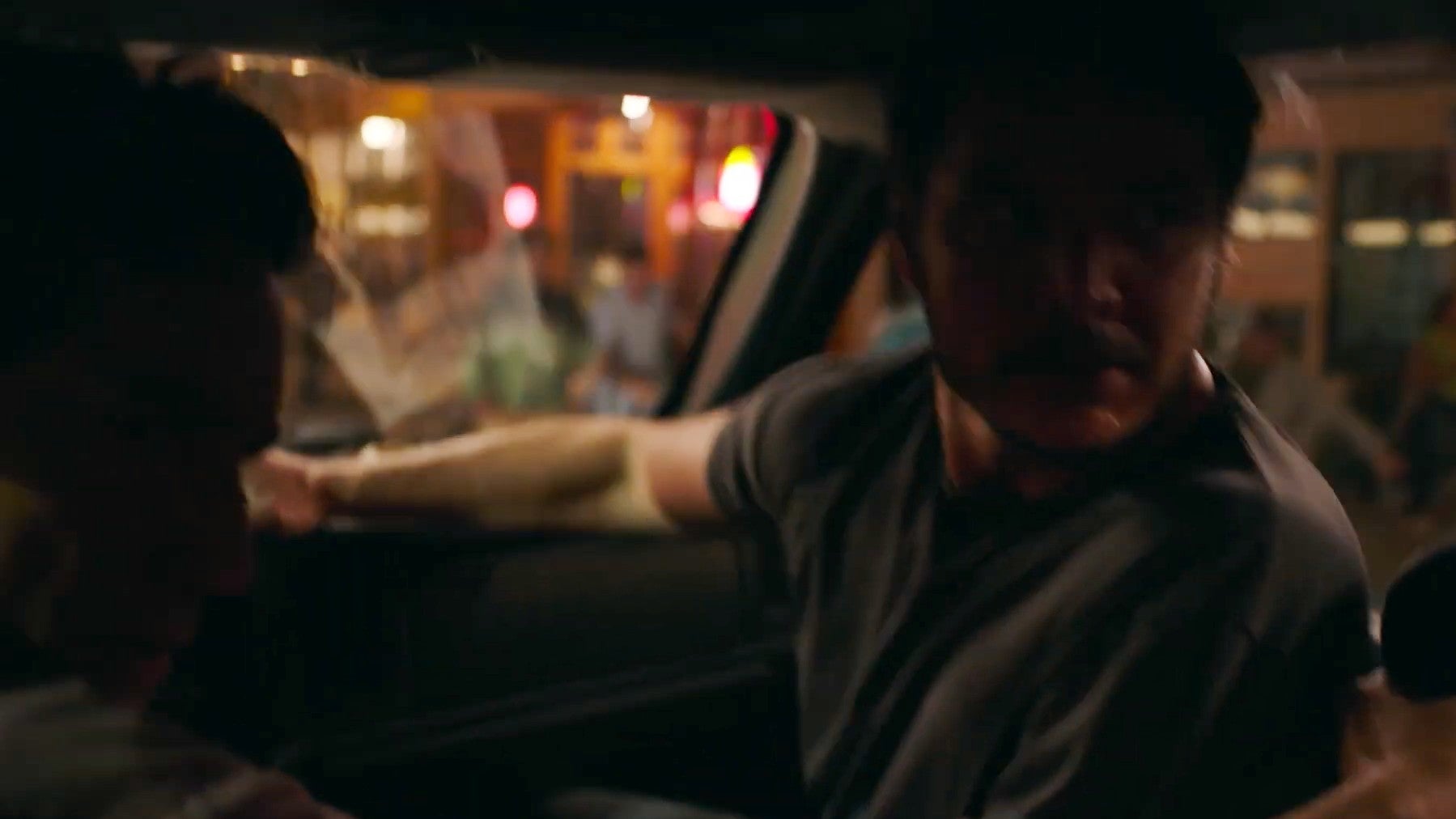 Joel tries to flee in the car with his family as the outbreak begins. 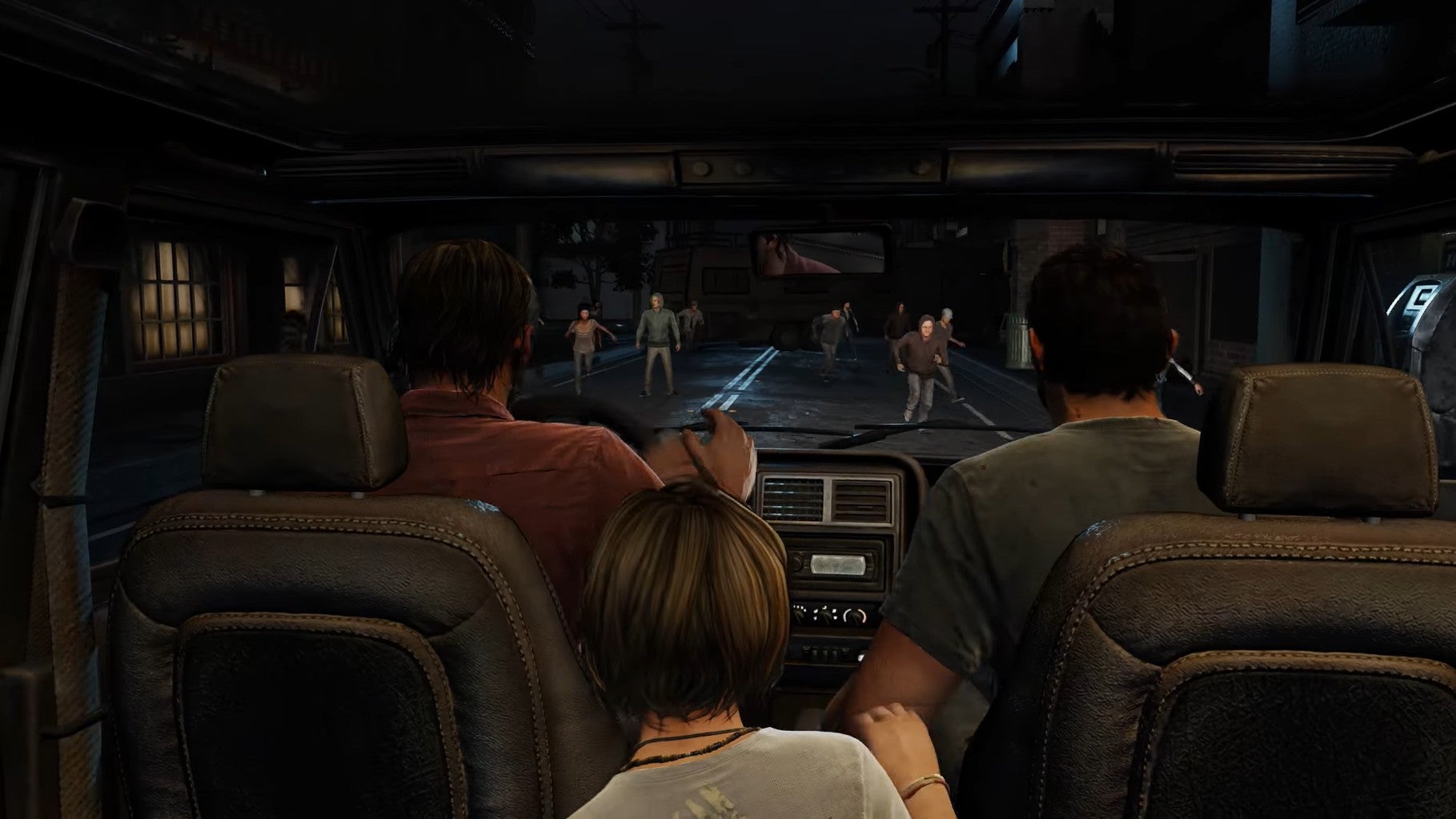 Joel with his brother Tommy and daughter Sarah as they try to get out of Austin in the game. 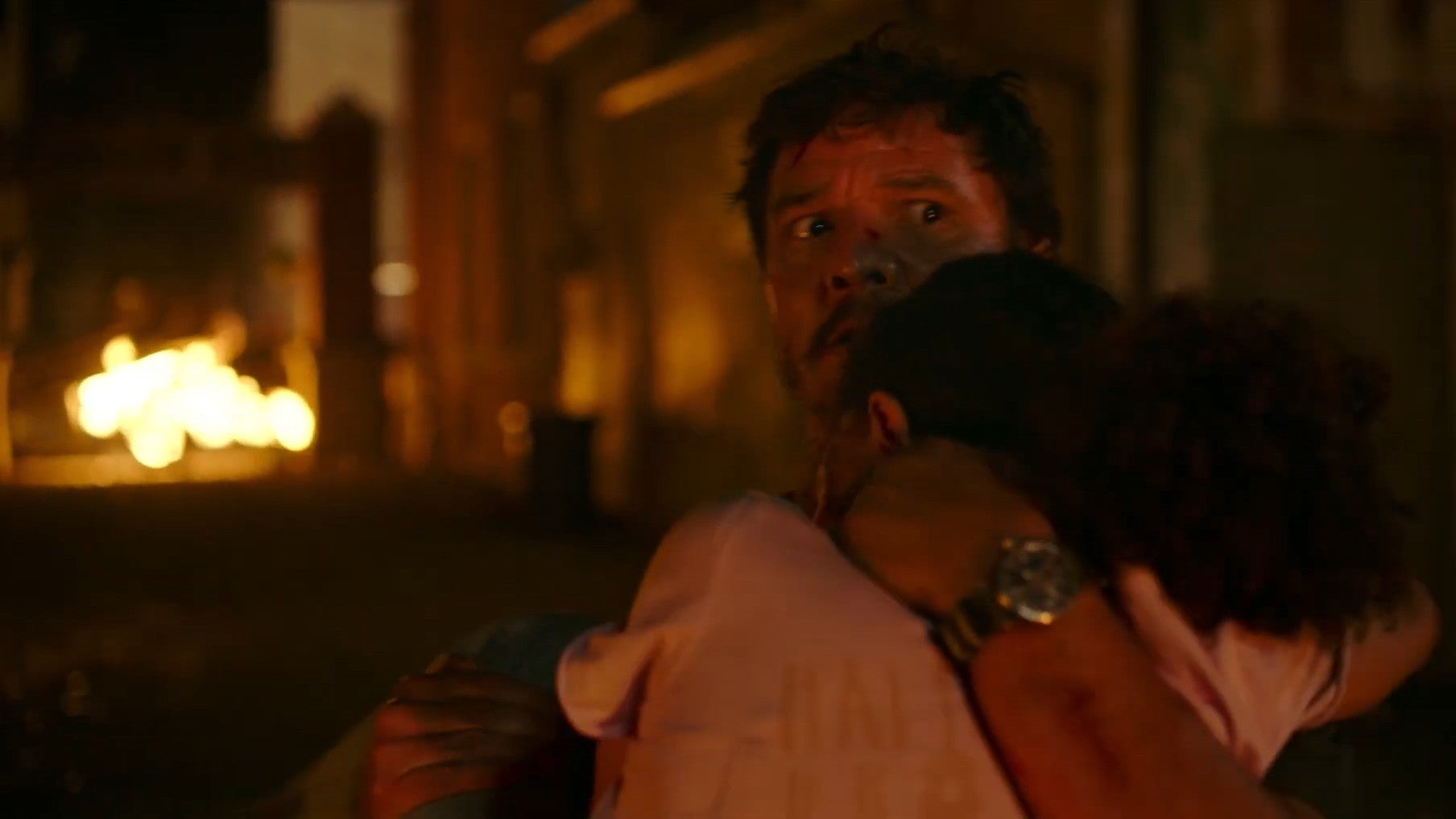 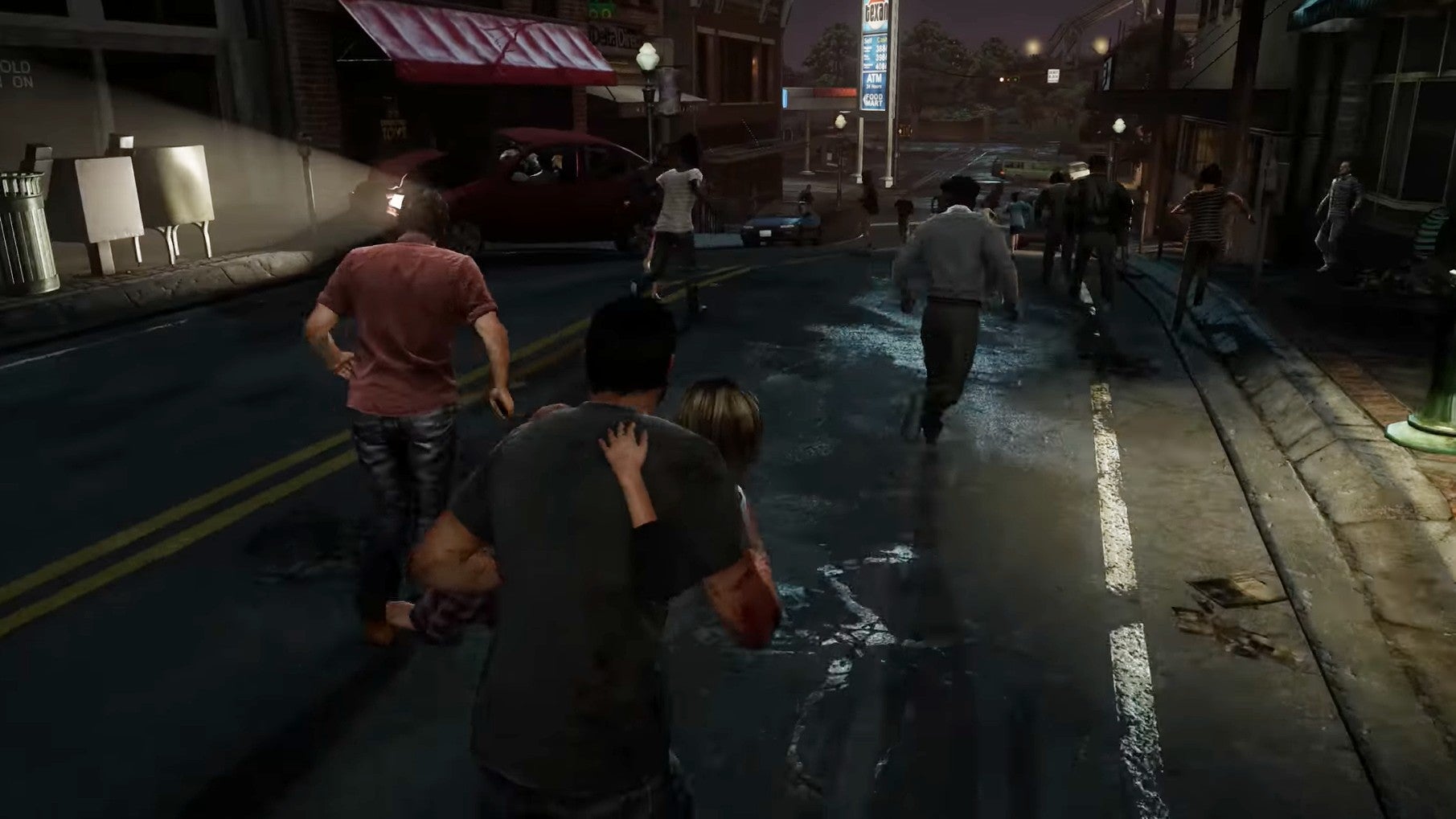 Joel transports Sarah from the car wreckage in The Last of Us game.

This next moment sees Joel clutching Ellie’s bloodied face in distress in a desperate attempt to calm her down after a traumatic experience, and while he doesn’t appear to be from the same exact location as the game, he seems to be at around the same time (I’m not going to spoil anything here). Still, it perfectly captures the essence of Joel and Ellie’s relationship. 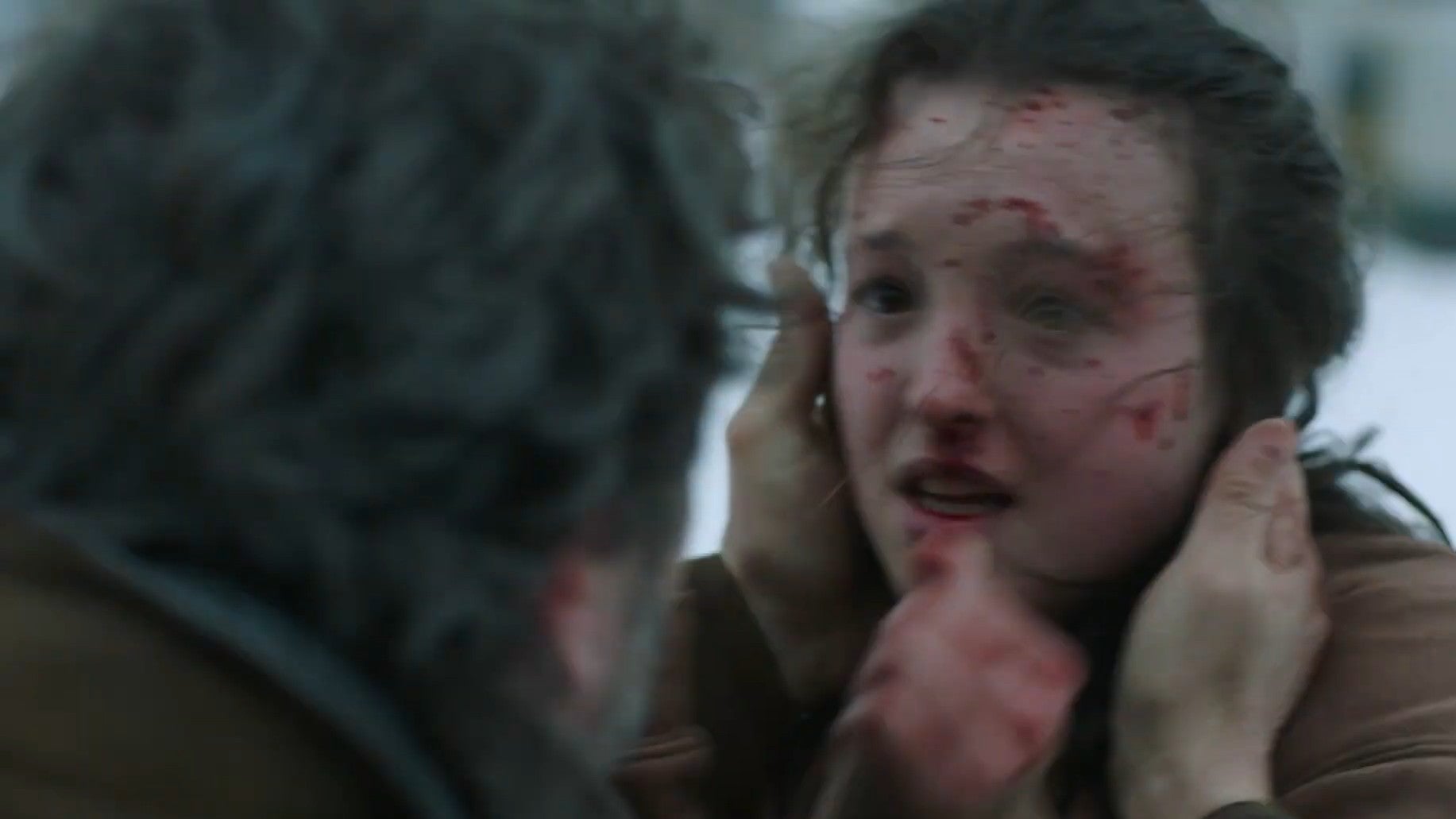 A distressed Ellie is calmed down by Joel in the HBO trailer. 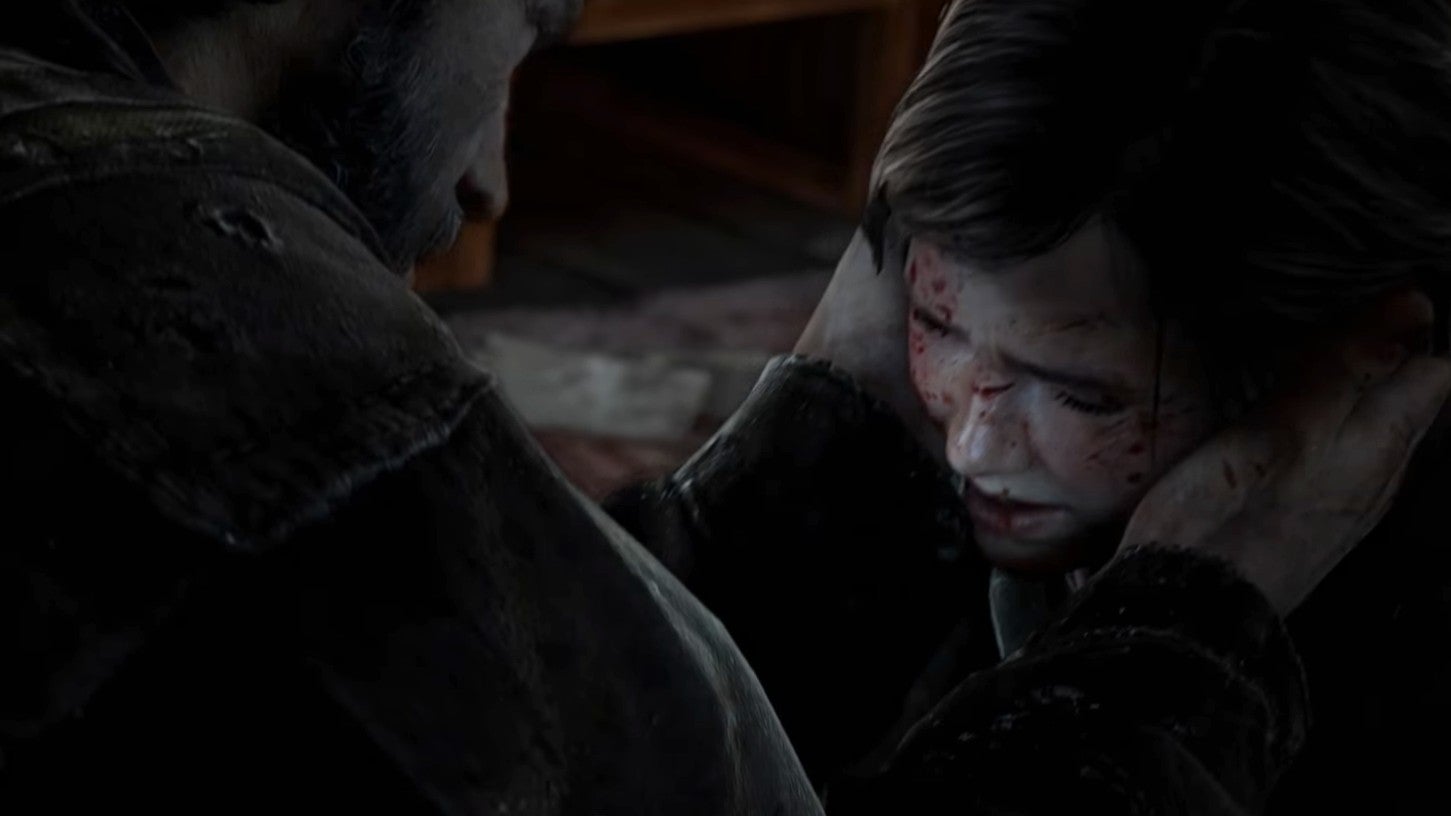 Joel calls Ellie “little girl” as he calms her down in the game.

In addition to scenes from the base game of The Last of Us, the series is also adapting moments from its DLC, Left Behind.

In the snaps below, we can see Ellie and her friend Riley (played by Storm Reid) spending time together on a ride, just like they did in the DLC. 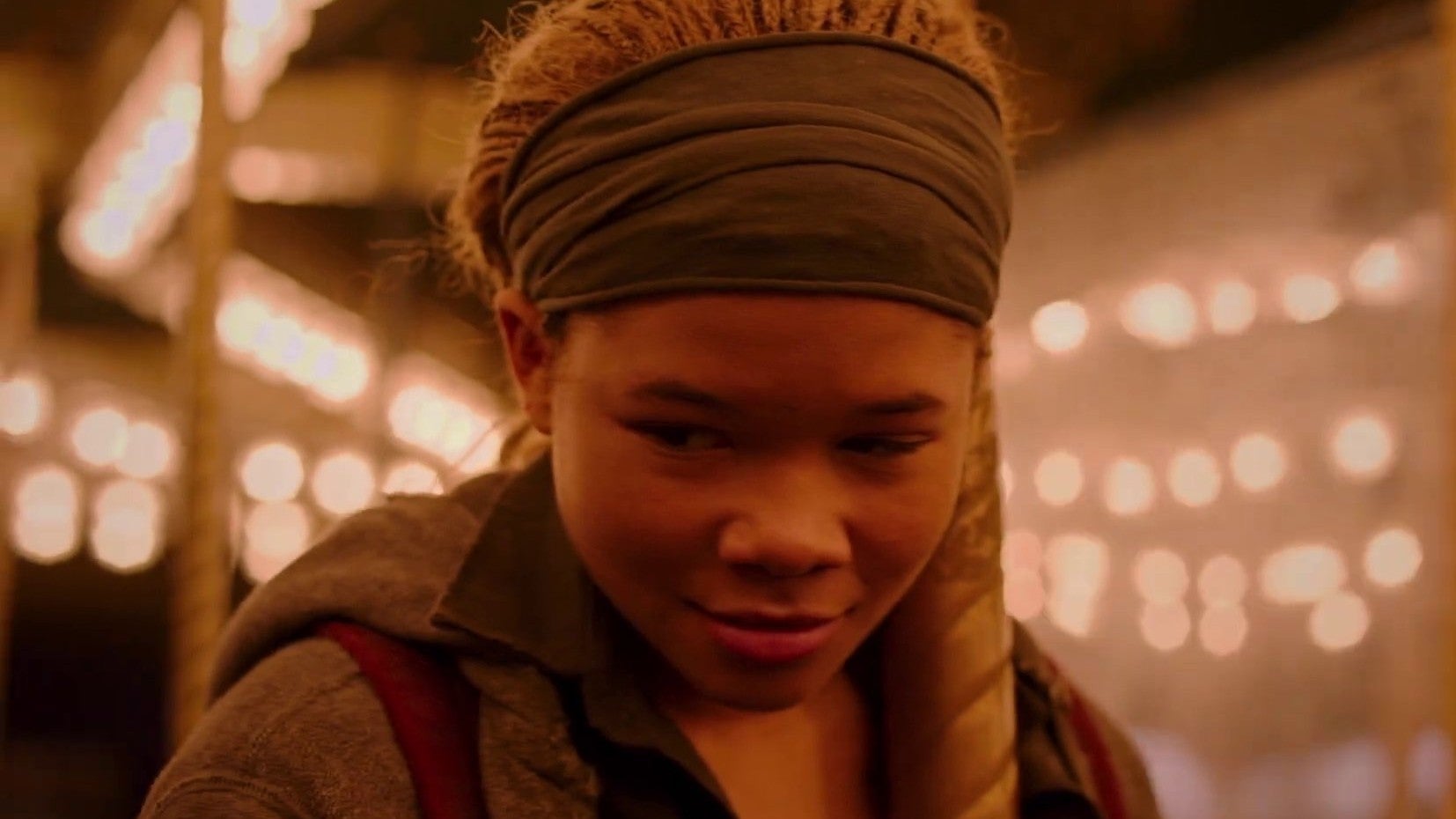 Storm Reid as Riley in the upcoming TV adaptation. 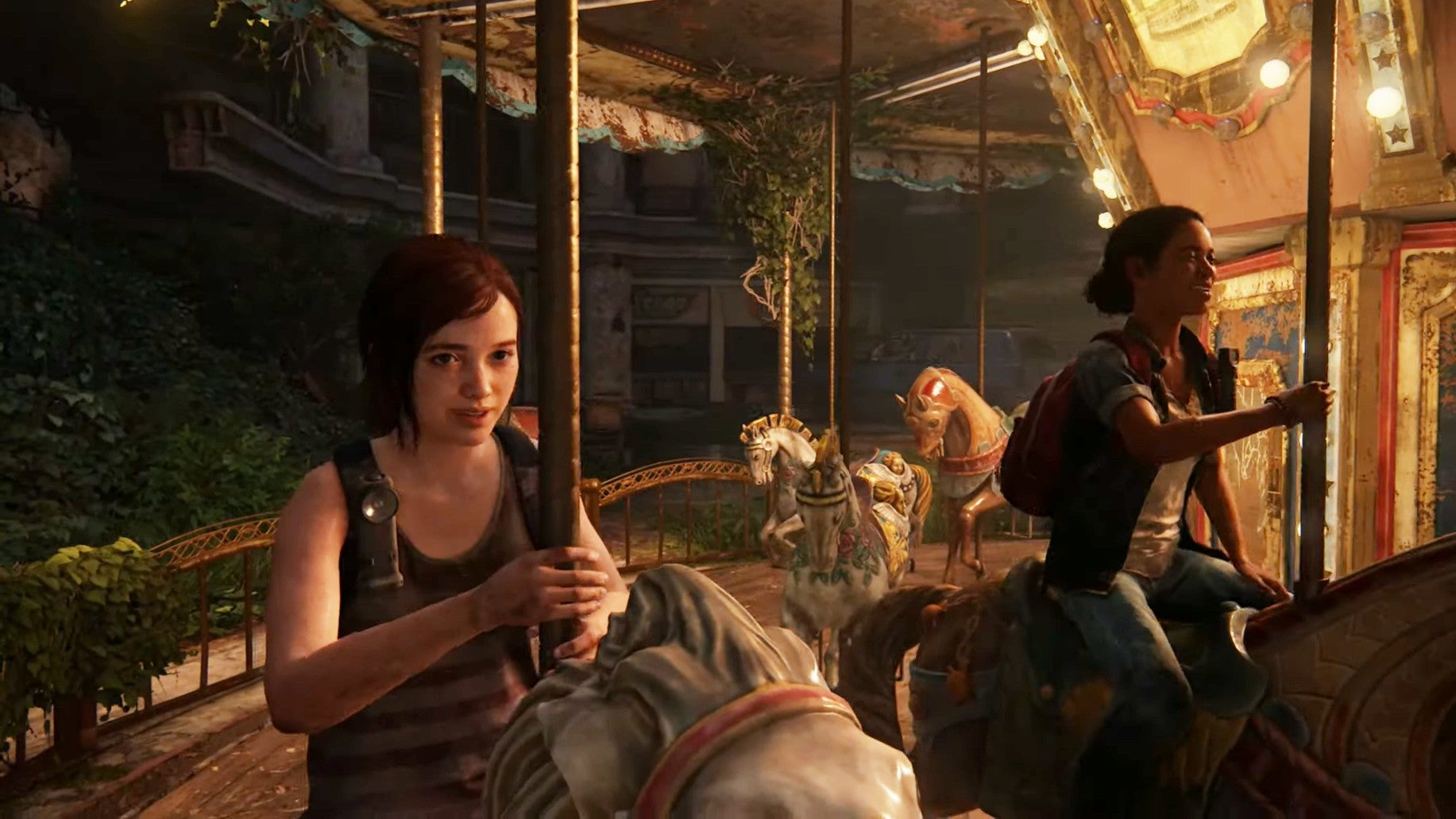 Ellie and Riley in the Left Behind DLC.

This brings me to all the characters we got to see in the new trailer. Along with Joel and Ellie, we also got to take a closer look at Anna Torv’s portrayal of Tess. 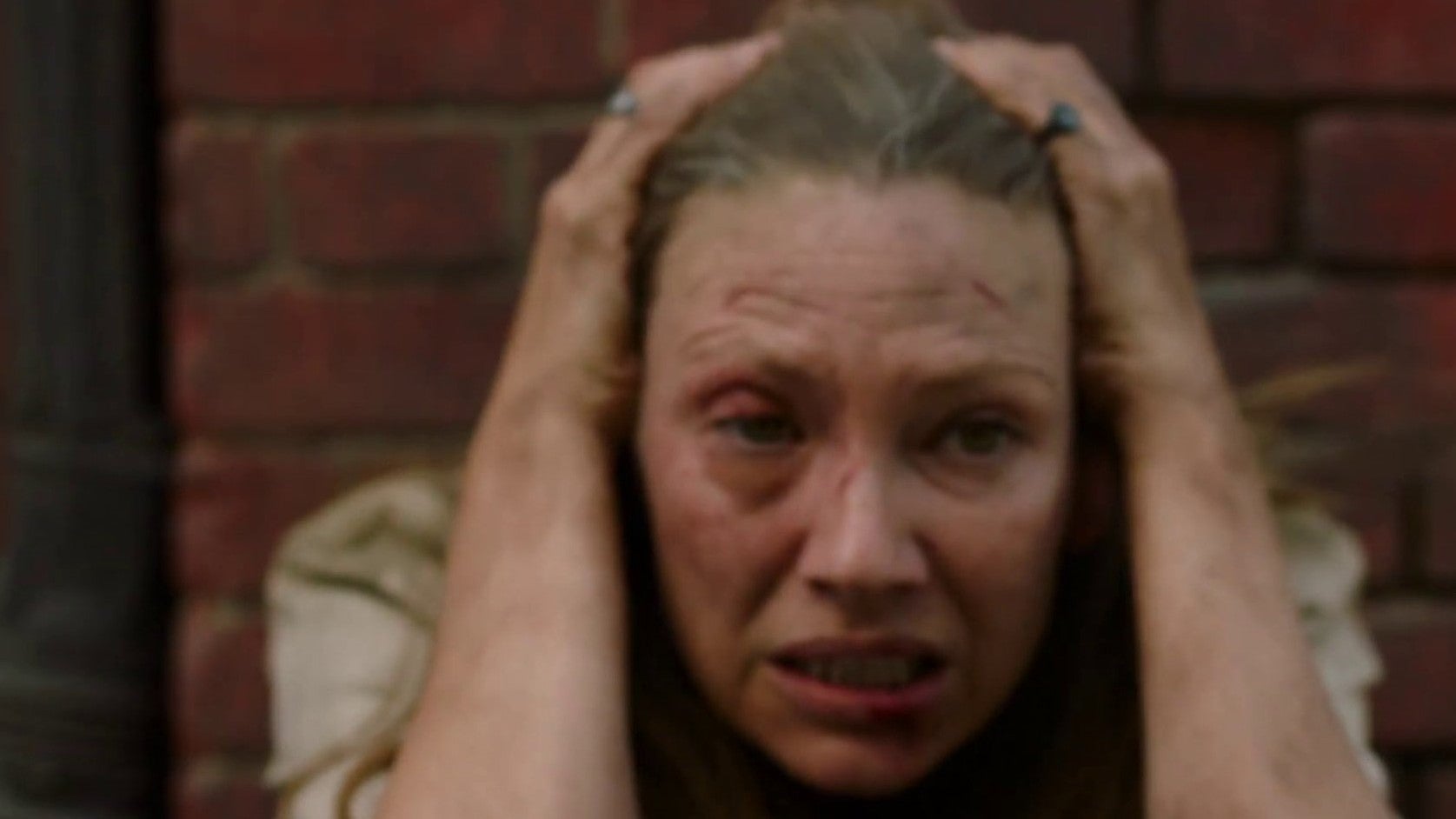 In the meantime, here’s Merle Dandridge as Marlene, in an almost exact replica of her outfit from the game. 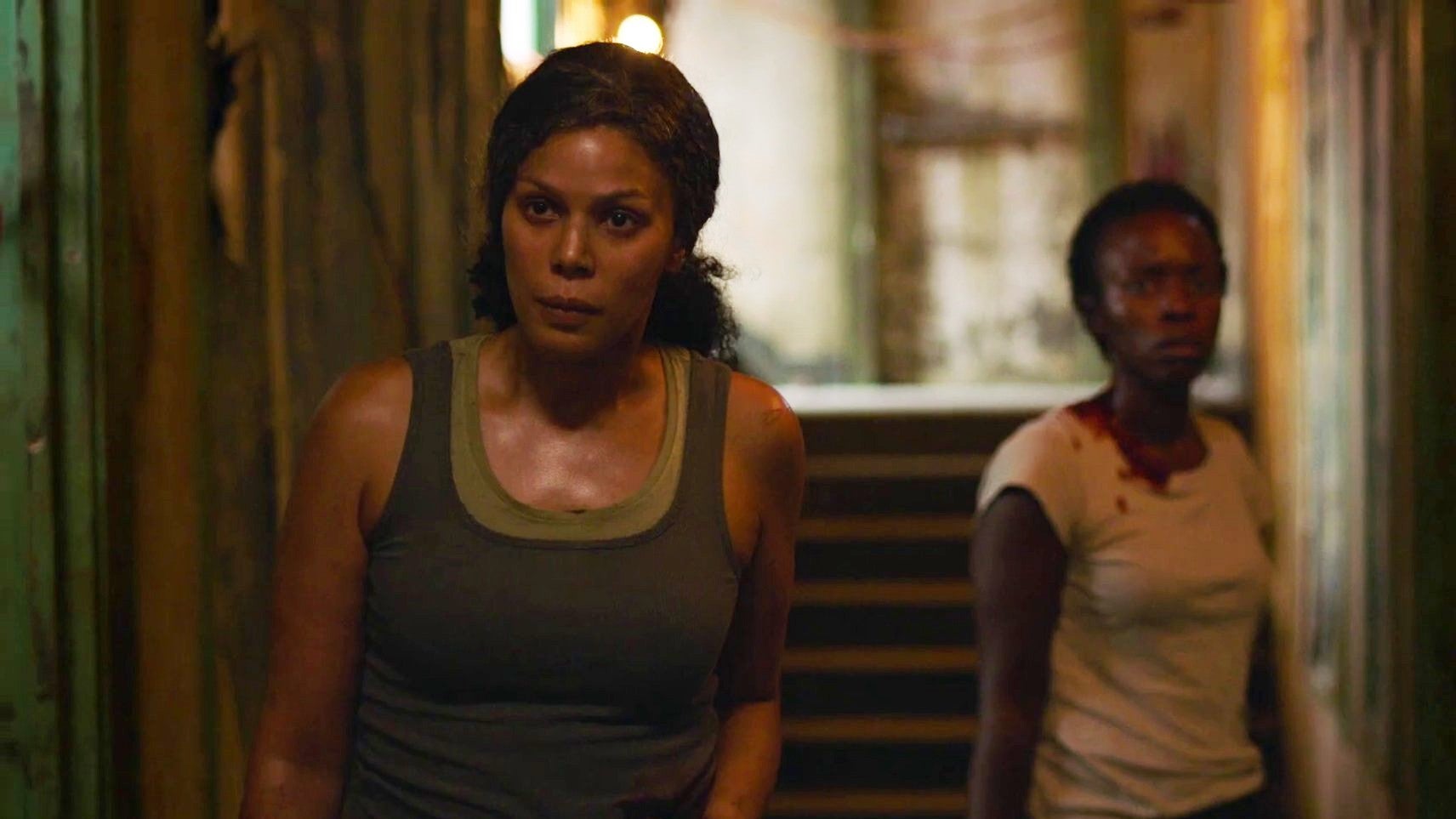 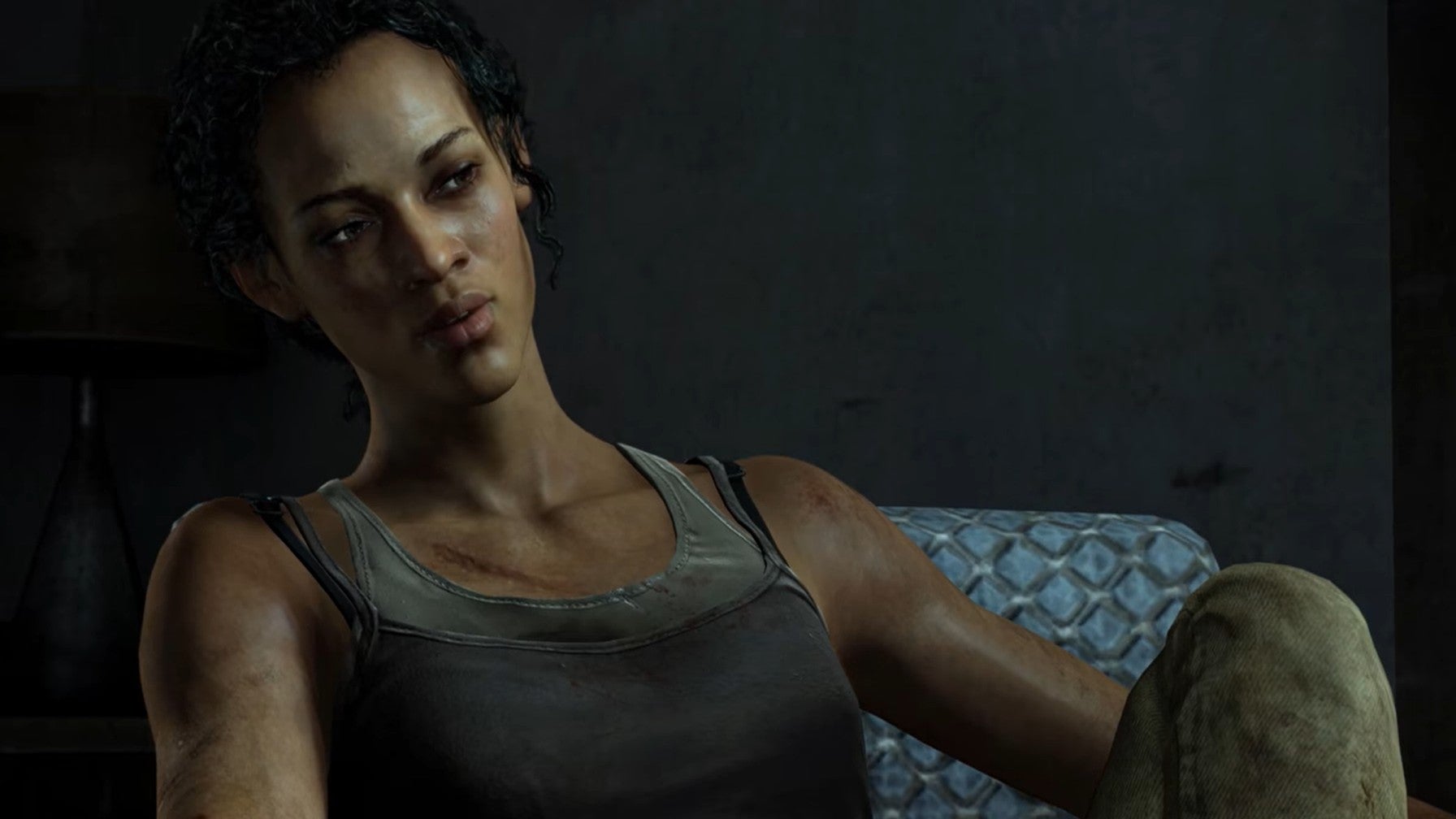 Marlene in the game.

Gabriel Luna took on the role of Joel’s brother, Tommy, on the show. This moment seems to be the first time the brothers have seen each other in a long time, given the look on Tommy’s face. 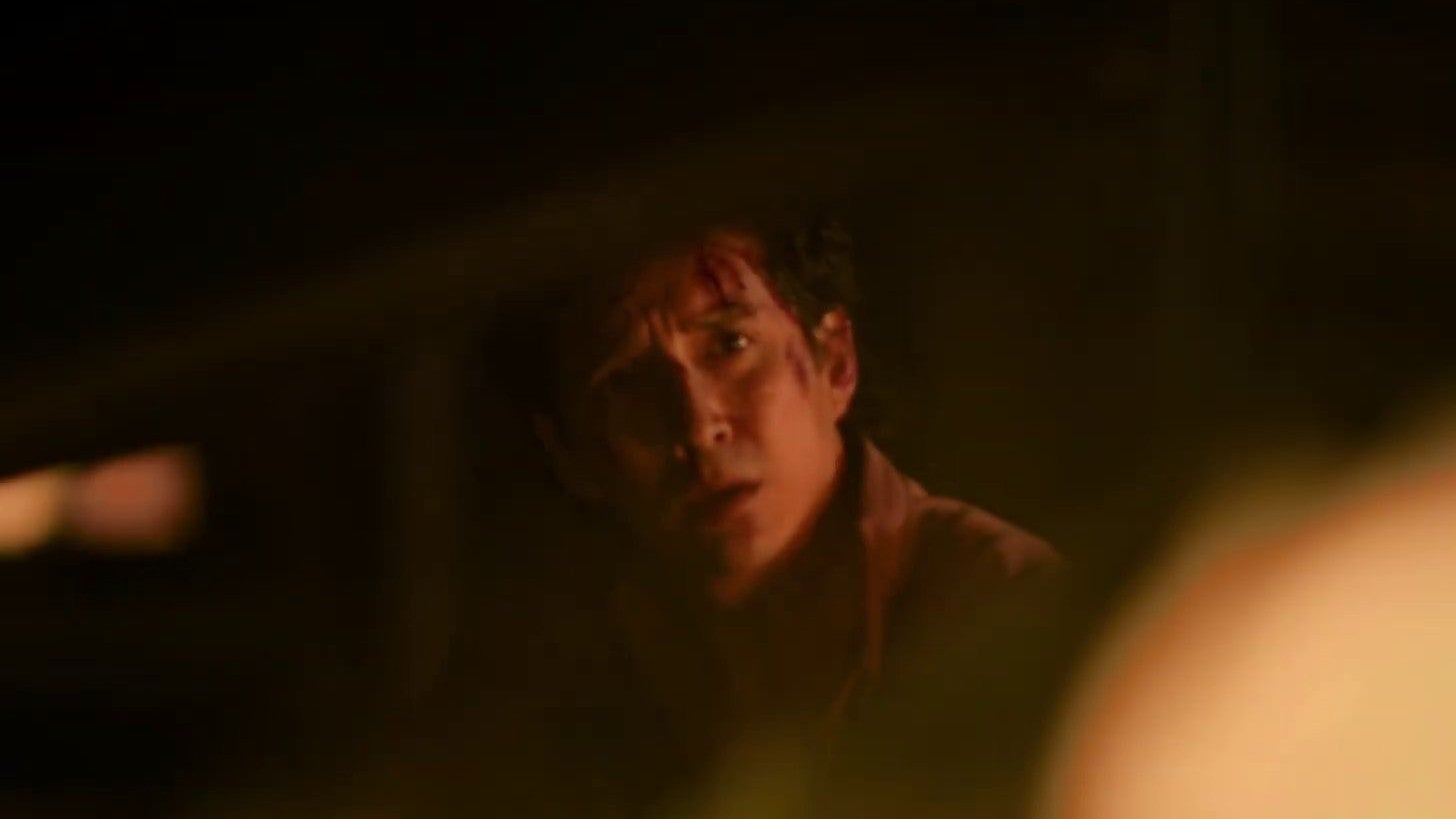 We saw a brief snippet of Nick Offerman as Bill in a previous channel-wide HBO marketing campaign, but yesterday’s trailer gave us another look at Joel’s cantankerous friend. . This photo shows that the HBO adaptation has included Bill’s fondness for traps, as Joel can be seen in a hole while Bill holds him at gunpoint. 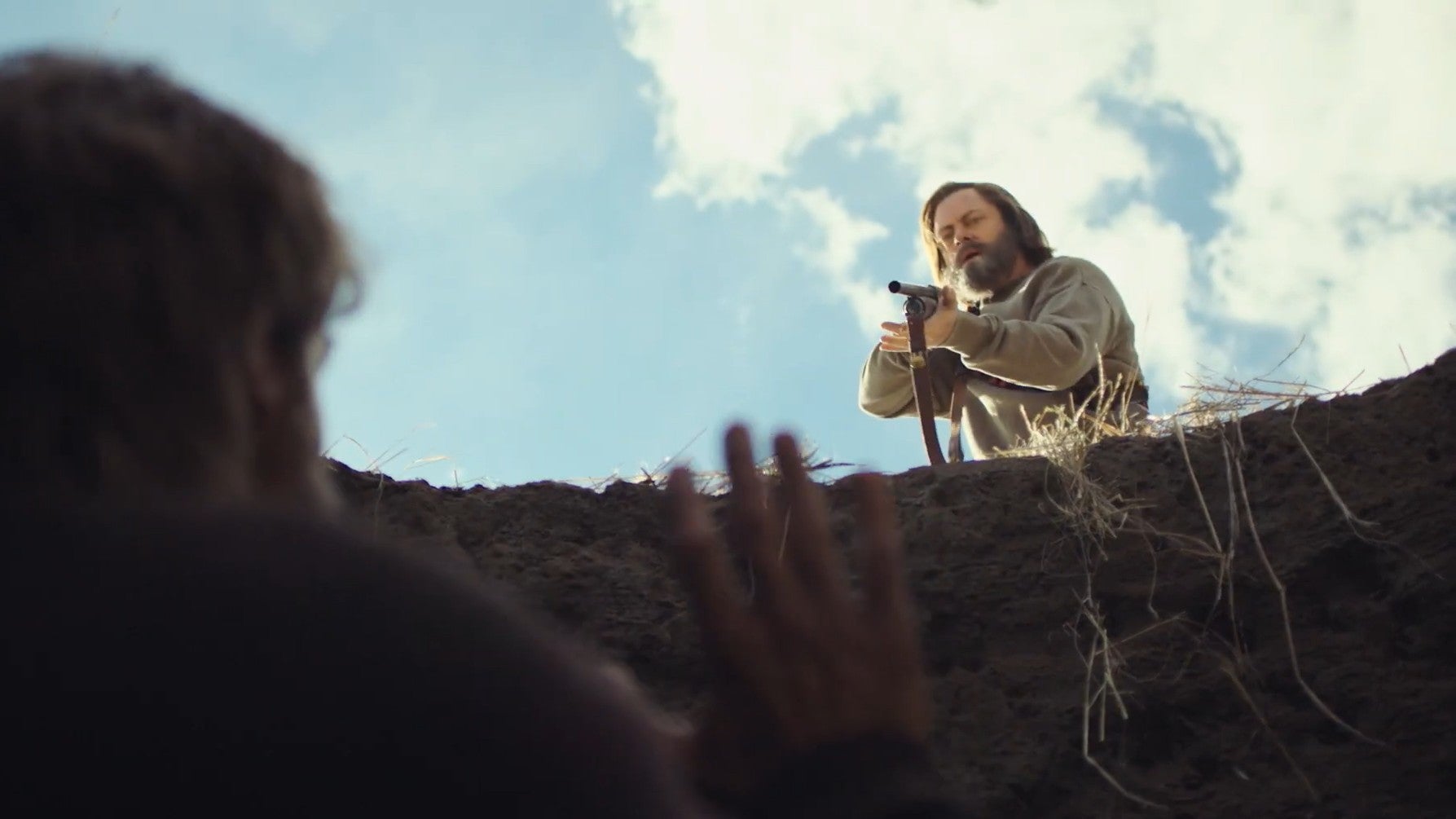 Joel in a hole, Bill on a hill.

Finally, on the casting side, we have a brand new character called Kathleen. She is would have a “ruthless leader of a revolutionary movement in Kansas City,” giving us more insight into some of the ways the show will deviate slightly from the game. Kathleen is played by Melanie Lynskey, whose other acting credits include Yellowjackets. 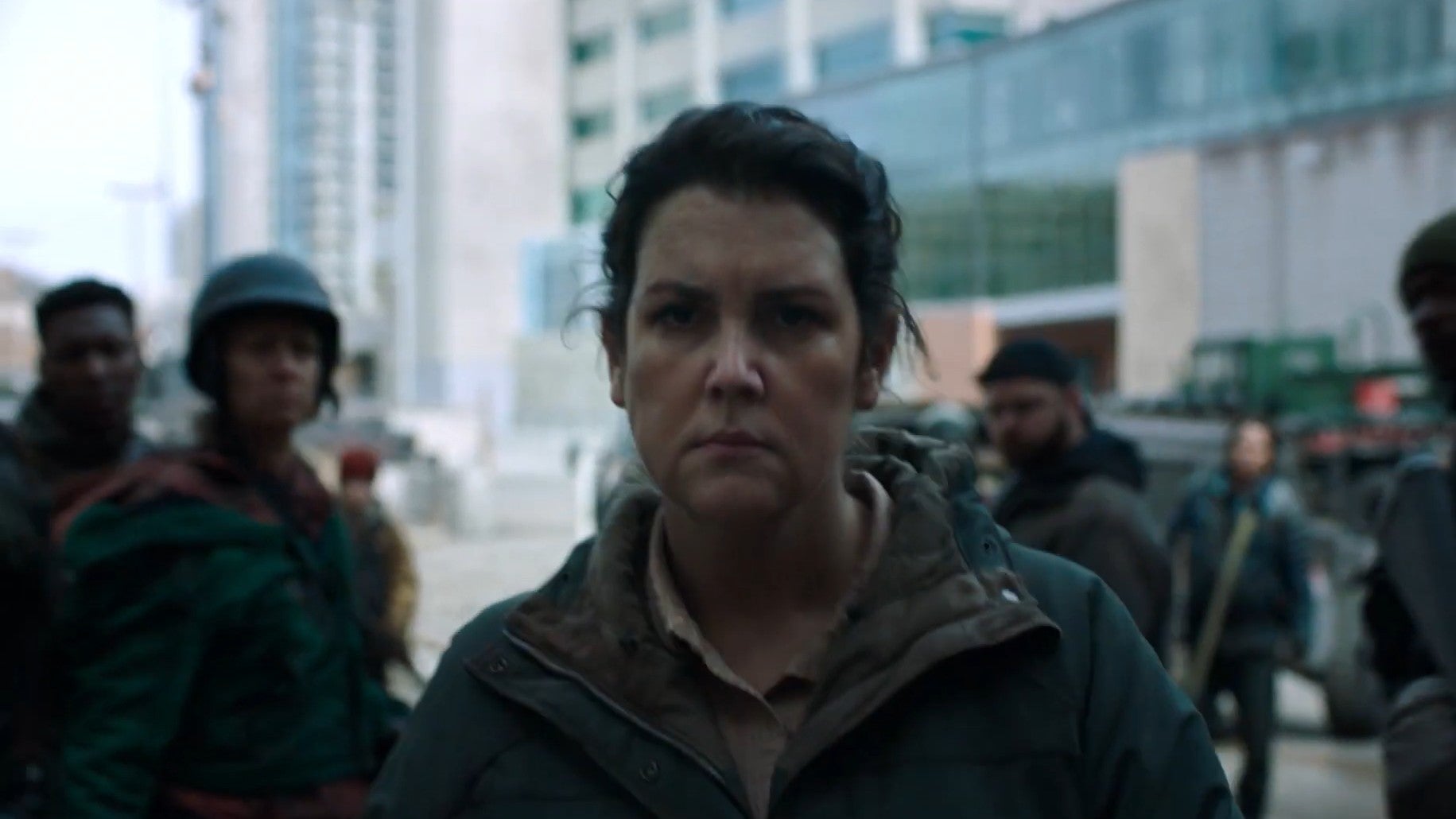 Kathleen is a new character played by Melanie Lynskey.

Incidentally, if you follow up, you’ll remember a previous casting announcement for Sam and Henry also mentioned that Joel and Ellie will meet the brothers in Kansas City rather than Pittsburgh. The official statement from that time stated that Sam and Henry were “hiding from a revolutionary movement seeking revenge”, so this could be Kathleen’s team.

And, of course, I can’t leave you without taking a closer look at the trailer’s take on the show’s clickers, which appear to have been pulled straight from the game. 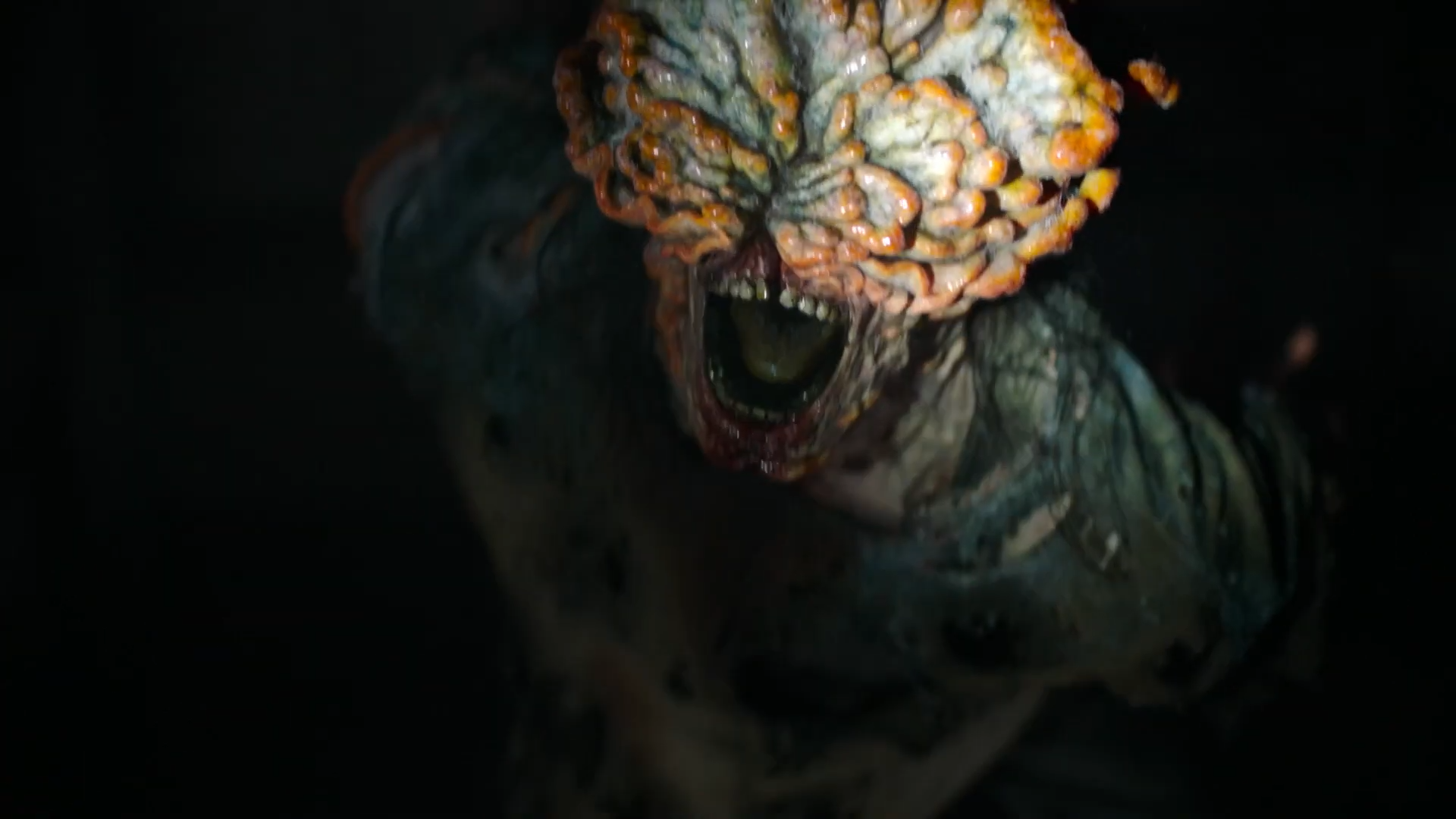 The last moment of this trailer that I would like to draw your attention to is this: 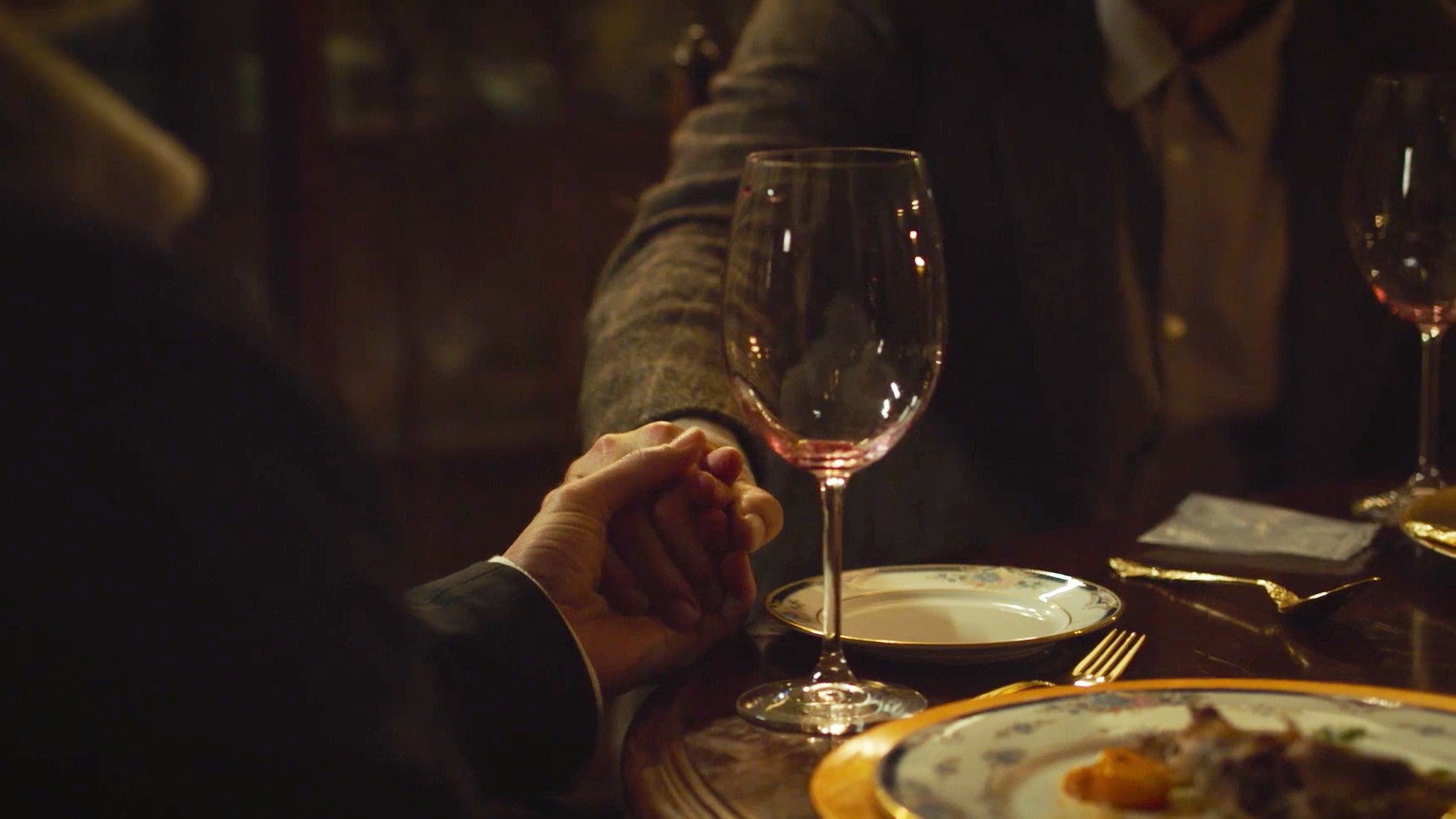 I’m not sure, but this dinner scene looks like it could take place before the events of the game, because everything still looks fine.

The small package seen in front of the charter on the right appears to have contained some kind of drug, possibly hinting that the couple holding hands in this image are choosing to have one last meal together as they know the apocalypse is coming and their la end is near.

This show is going to break my heart again, I can tell.

The Last of Us is slated for release next year, though an exact date has yet to be announced.