Behavior Interactive, developer of Dead by Daylight, has unveiled its next game: Meet Your Maker.

It’s a first-person building and raiding game set in a hellish post-apocalyptic wasteland, with players building towering industrial outposts filled with traps to protect genetic material – then infiltrating the outposts. others to steal the precious resource.

It certainly feels like a departure from the popular horror multiplayer game, both in genre and aesthetics. But there are more similarities than you might think.

Check out the Meet Your Maker trailer.

For starters, Meet Your Maker has a certain undertone of horror – albeit now in science fiction. It takes place in a desolate world filled with towering, brutal structures and genetically mutated guards – a bleak future that may mirror our own, ravaged by disease and global warming.

But really, it’s the asynchronous multiplayer aspect of Meet Your Maker that feels so inherently behavioral. Gameplay is split into two halves, with players both building their own outposts for others to attack and attacking outposts themselves. Both can be done in co-op with friends.

Let’s start with the construction. This is done in first person, by flying or walking around structures and placing large blocks on a grid system.

At the center of each outpost is the genetic material, or genmat as Behavior calls it, and there’s a little harvester robot that must always have a path to the genmat from the outside. Players must fortify this route, creating whatever structures they desire and covering it with props (visual, sometimes animated, props) and decals (essentially paint).

Next comes filling the structure with traps: arrow traps, incinerators, caustic waste cubes, bomb ejectors, etc. Various guards can also be placed and their patrol routes recorded directly by the player, both for ground guards and flying units. Of course, all this has limits to keep a certain balance.

When it’s all done, players can test and then upload their creations for others to try their hand at infiltrating. The behavior emphasizes that building is an iterative process, which means watching videos (first and third person) of players attacking your outposts only to later edit and rebuild them, making them deadlier over time. time.

The behavior ensures that moderation will be in place to ensure nothing untoward is constructed. Players can give feedback on builds and report removal, which the team will be doing first.

The other side of the coin is to loot others. It works much like other first-person shooters, with two weapons available (a harpoon gun with limited ammo that needs to be picked up and a melee weapon), consumable grenades, and a grappling hook for extra maneuverability. Players must grab the genmat and make it out alive. One hit and you’re dead.

However, you can try as many times as you want. And with knowledge comes speed. Don’t be arrogant – the game is already designed to be challenging, despite the probably brutal player creations. 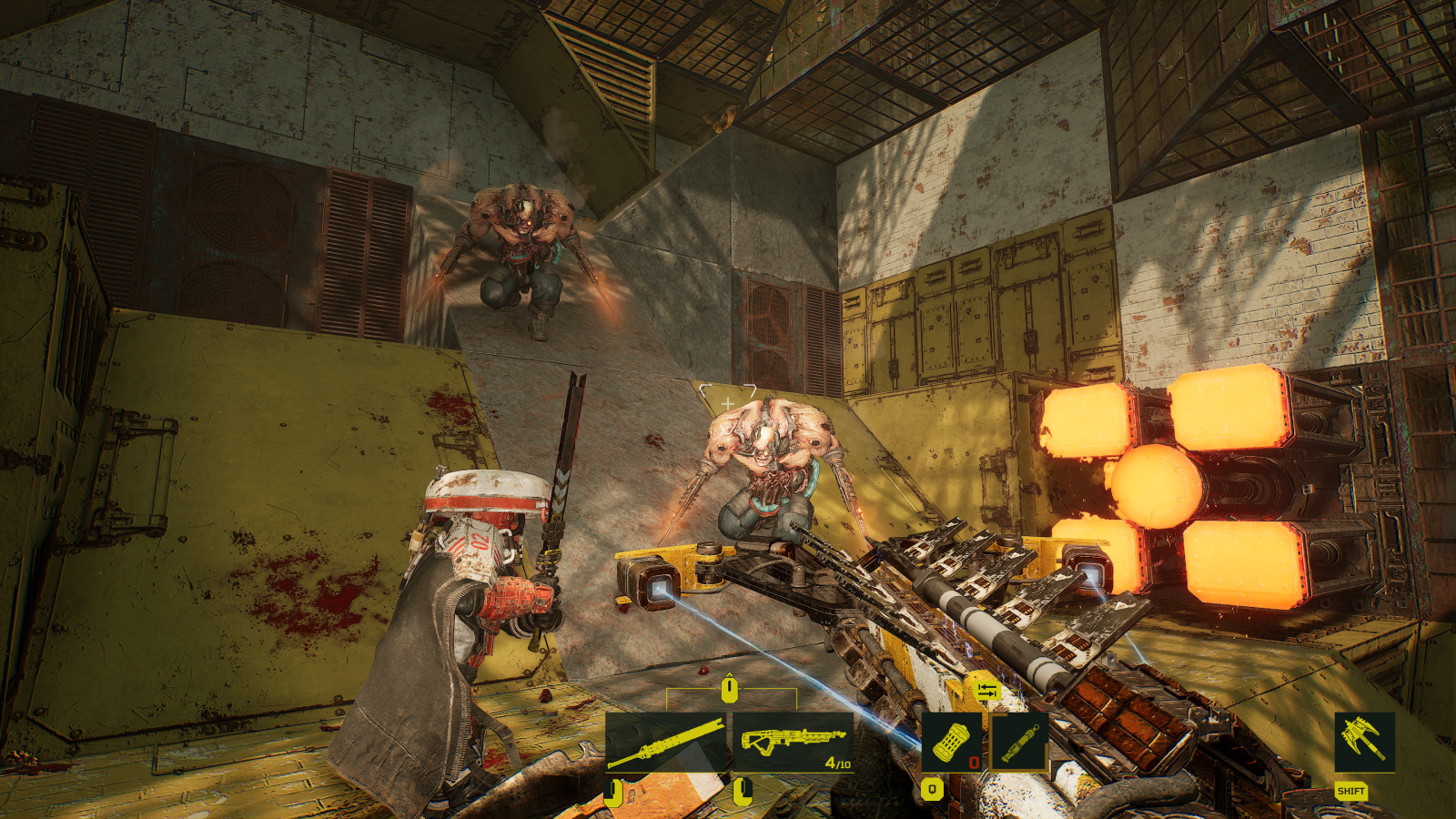 Raiding with a friend is more fun and allows re-rolls.

Building and raiding will reward players with resources they can take back to their Chimera – a “living experiment created as a last resort to save life on Earth”. Providing your Chimera with genmat in your Sanctuary will allow you to upgrade your Advisors – essentially increasing the abilities of your traps, guards, weapons and their associated mods and perks, improving your chances of thwarting raiders and successfully infiltrating the outposts. You are encouraged to try both to get the maximum resource rewards.

And so the loop continues. UGC is at the heart of Meet Your Maker, but it’s also a social experience.

Not only can you play the game cooperatively, you can share creations with friends (though Behavior insists that friends won’t be able to bypass the game’s resource saving with their builds), follow your favorite creators, send screenshots of friends’ failed attempts, and award accolades after each raid: fun, brutal, ingenious, artistic.

The behavior also has Twitch in mind. Dead by Daylight has become a sensation on the streaming platform, and the developer hopes for a similar outcome with Meet Your Maker. It may not have been designed specifically for Twitch, but it’s been part of the team’s design thinking from the start, improving the social aspects of the game.

It is also intended to be another long-term project. Players will earn resources and experience to level up as they play, and Behavior has plans for post-launch content: new block types, traps, weapons, guards, armor, and more . These will slot into existing systems and affect both building and raiding, requiring new strategies for both.

Meet Your Maker certainly has the potential to be the next viral sensation, a game of brains versus skill. It should appease fans of building and shooting games, with a central loop that might prove irresistible.

The community will probably be quick to compare it to Dead by Daylight. Still, it’s hard not to compare it to so many other games in an effort to generate interest. There’s Minecraft in its building mechanics; Doom and Quake in its aesthetic; LittleBigPlanet in its social interactions; and countless FPS games in its shoot.

These could be the building blocks of something special, as long as they can capture a spark of originality.

Meet Your Maker is scheduled for release in 2023 on PC (Steam), PlayStation 4 and 5, Xbox One and Series X/S. A first playtest will be live from August 23 for about two months, register on the game site.