The first thing that strikes me about Moonbreaker, Subnautica’s vastly different game from Unknown Worlds, is how stiff and clunky it feels. It’s weird because turn-based fighting games are something I’m really familiar with, but Moonbreaker takes some getting used to, and some of these things I don’t like, and others that I really, really like.

This stems from the fact that Moonbreaker is a miniatures game. A friend called it Warhammer without the license and that’s exactly what it is. You collect and paint the miniatures you use in battle; the minifigures are the whole point, so it’s no surprise that they behave like them and don’t move like animated characters. They are frozen in the dramatic expression they have been given: applaud, charge, aim, whatever. And when they move, it’s like someone picked them up and put them somewhere else. And when they attack, it’s as if a child is tormenting them in an emulation of the real thing. The miniatures are voiced – there’s a lot of energy and character to the game – but there’s no escaping it, you’re playing an adaptation of a tabletop game.

But the camera also seems rigid, fixed on rails, you will have a hard time removing it. It won’t let you spin around the battlefield, seeing the action from different angles, which is something I’d really like to do – if only to admire the miniatures I’ve painted. But I also want it for gameplay reasons, so I can see group matchups more clearly. When large figures stand close to smaller ones, it can be difficult to see what is going on. As it stands, I can only nudge the camera rotation slightly before it reverts to a fixed angle, and that doesn’t help much.

The zoom doesn’t help much either. You can get up close, almost eye-level with the figures, which is very impressive, but when you step back, it’s like the camera mimics a standing person, moving you over the table in a kind of top down view. see. But it doesn’t go high enough and fails to clear up those confusing clusters.

It’s like someone is holding my head too close to the action – I feel stuck and want to get away. But I also think that this claustrophobia is entirely intentional, and that Moonbreaker does the equivalent of putting fighters in a ring or an octagon, and forcing clashes to happen. And in this, as in the sports that take place in these arenas, movement and positioning are key.

Keeping characters at bay, or closing the gaps between them, is half the tactical battle, and there’s a whole subset of abilities based around that. Move carelessly and you will be punished, and heavily if you play a skilled opponent. And it doesn’t help that the motion controls are original in themselves and take some getting used to.

I like the size but there is a lot going on in a small space. It’s a bit zoomed. But note that you can’t really see this character behind the protruding piece of cover – the fighter with only one health.

It adds up to a cranky intro, but live with it a bit and let it settle, and something promising begins to emerge. I can’t shake the comparison to HearthStone in the way it plays – it’s not a card game, obviously, but it kinda behaves like one.

In Moonbreaker you have a hero figure and every battle starts with only them on the battlefield – you and your enemy. And you gain a point of ash (a kind of energy) that you can use to play another figure if you can afford it. On the second turn, you gain two ashes, and on the third turn, three ashes, and so on. Cinder is also what you spend on your figure’s special abilities, so the decision is whether to act now or call in new figures to build your power for the future.

On the surface it’s simple, but underneath there are myriad ways to affect this formula. The figures all have dangerous things they can do. Some grow stronger the more they are hit, while others immobilize figures, locking them in place. Some struggle. A little poison. Some heal. Some dam areas. And from them comes another dilemma: do you ignore enemy miniatures and go for the enemy jugular, their champion, or do you deal with their minions so you don’t get overwhelmed later?

The answer, as you can imagine, is constantly changing – sometimes it’s elusive and you lose, sometimes it’s apparent and you win. And each time you face a new opponent, the puzzle is refreshed – you can fight the AI, incidentally, but fighting other players is where it’s at. And again, like other card games, online matches are a place of limited and therefore painless social interaction. 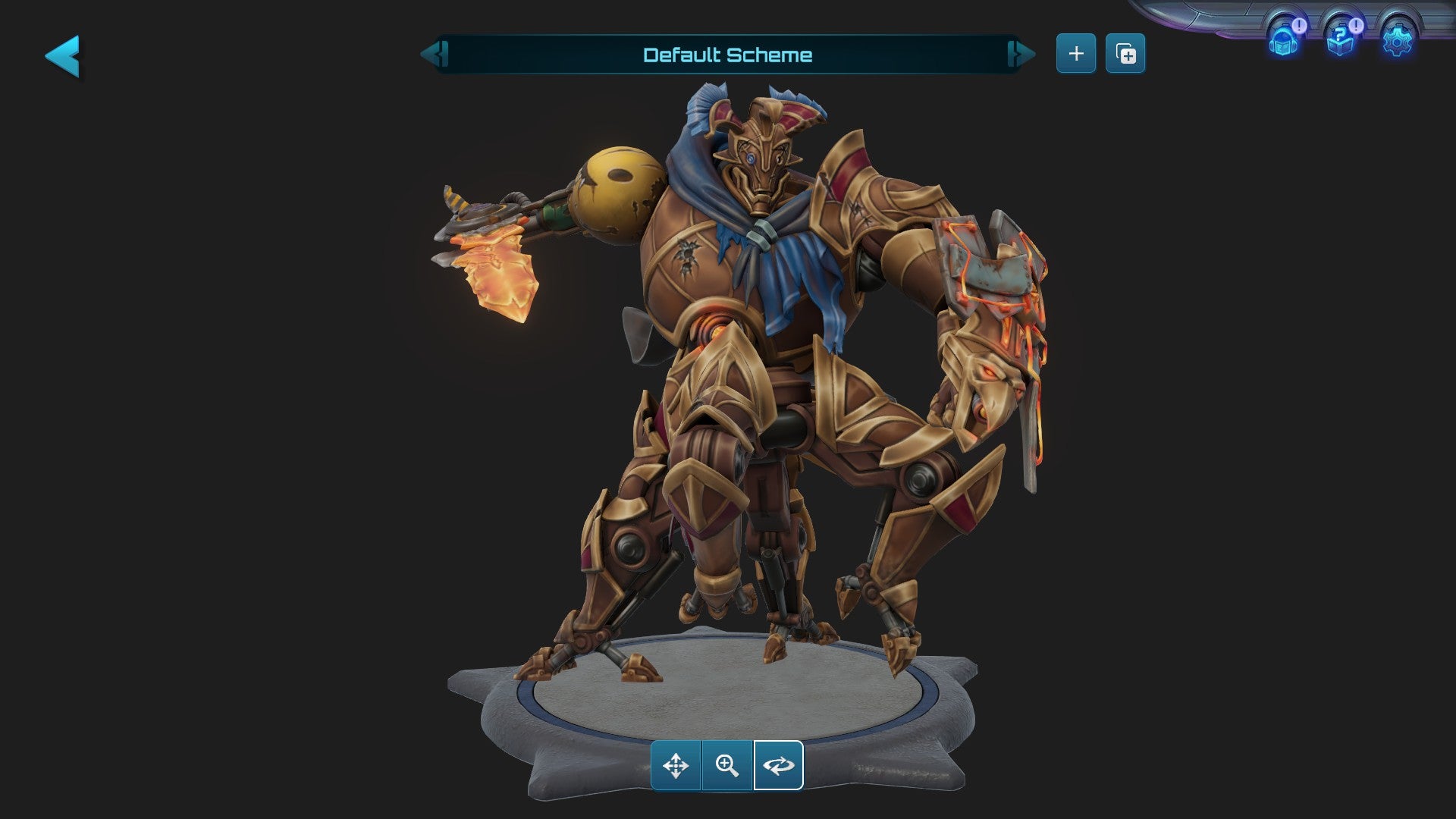 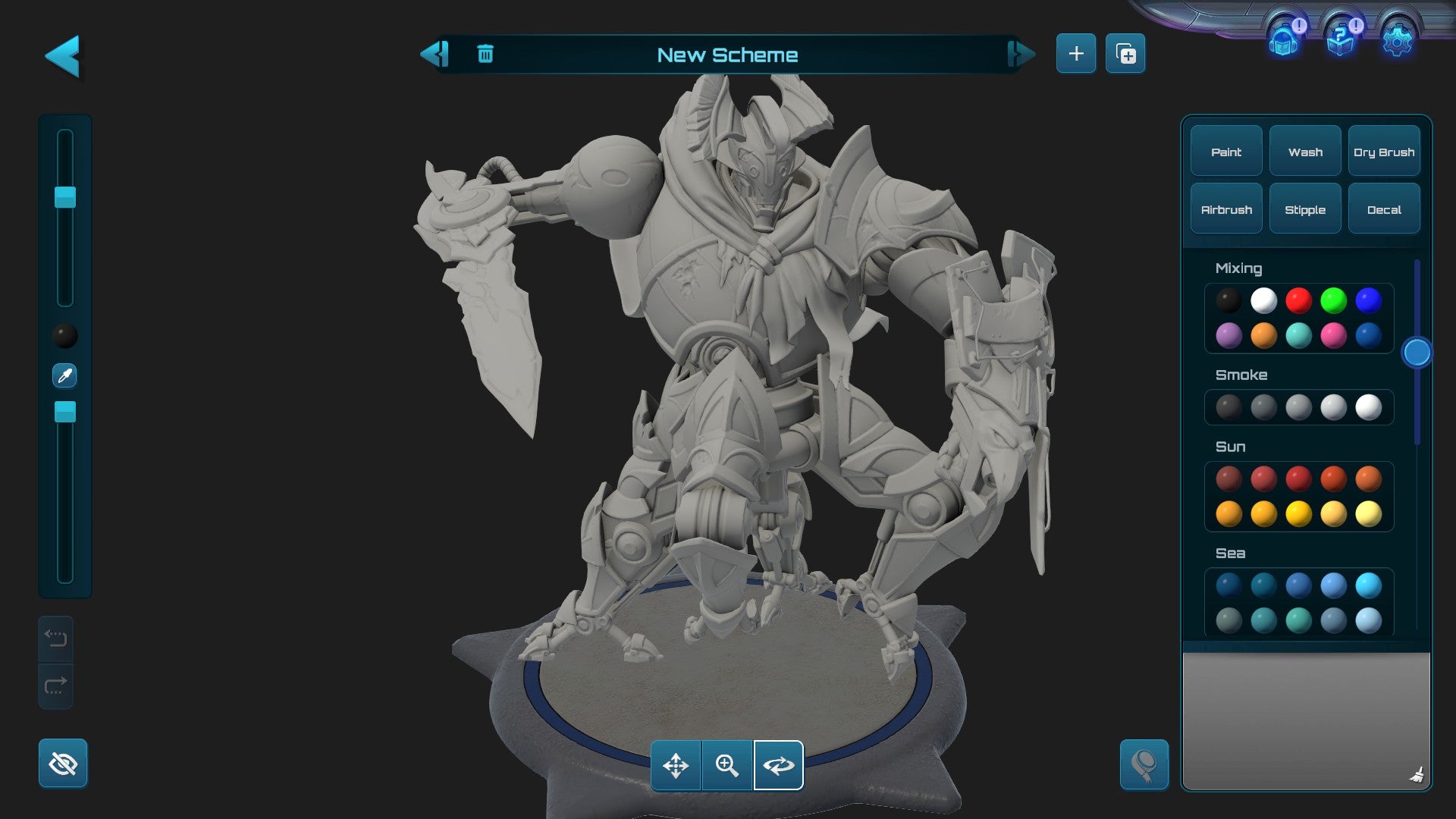 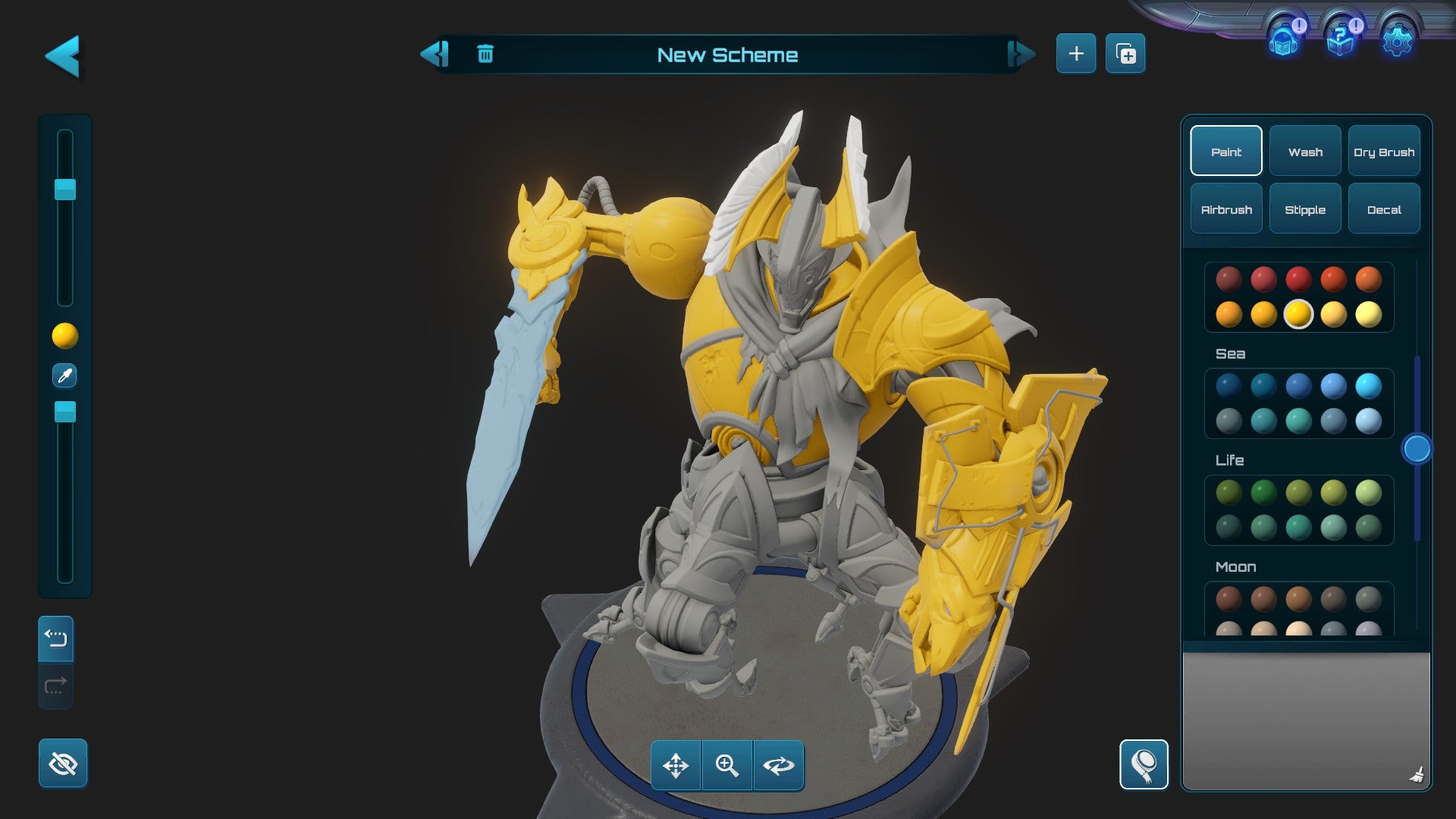 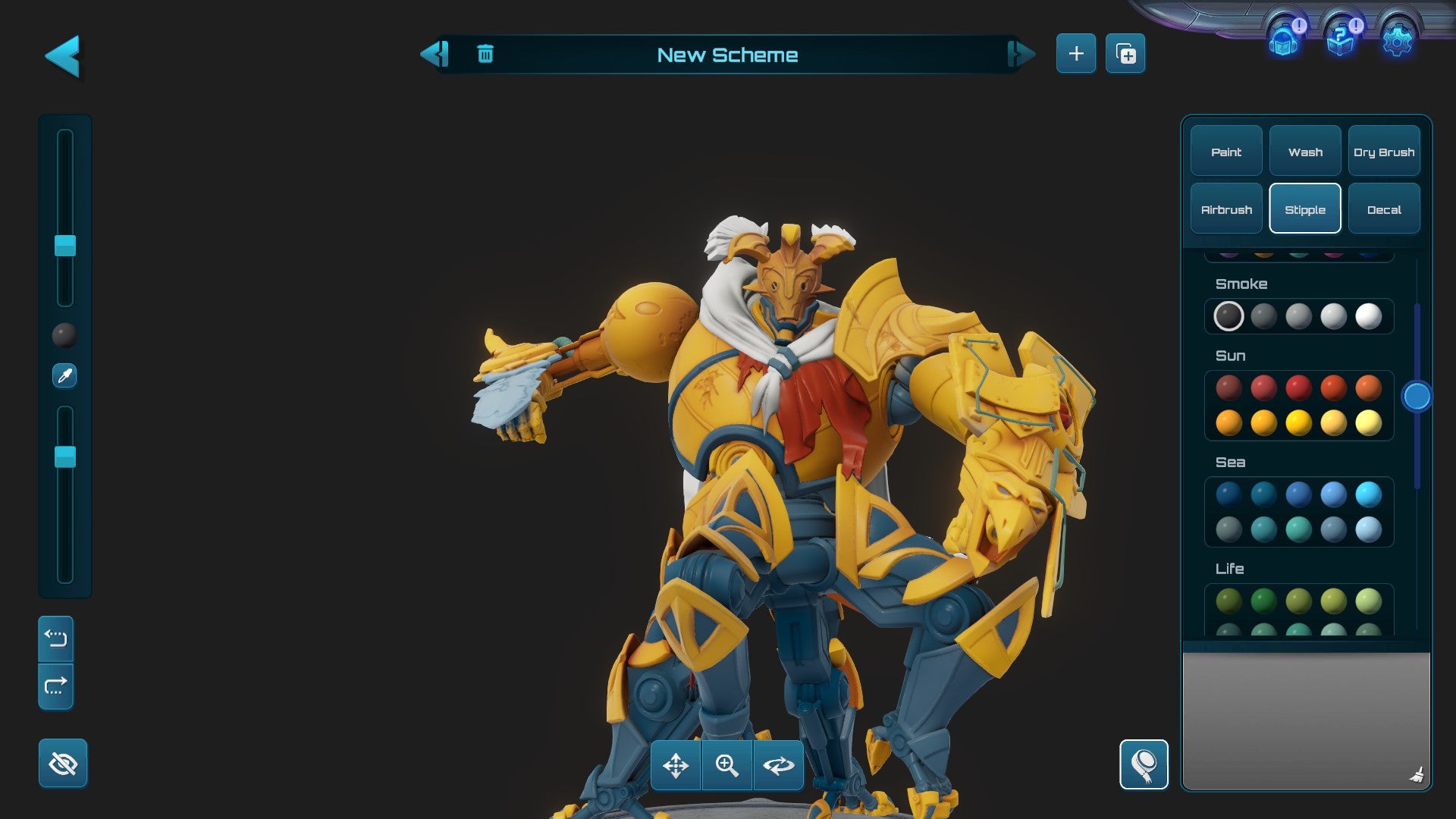 I know what you’re thinking: he has a natural talent. It took me less than an hour! Eat your heart, Johnny Chiodini!

The other important side of Moonbreaker, as discussed above, is painting the miniatures you collect. The game has a full paint studio built in, and its magic feature, for me, is being able to lock paint to the layer I want to affect – say, an armor layer. It’s a bit like putting masking tape on everything else: I can run paint like Jackson Pollock and not mess anything up. And it makes it possible to paint an entire miniature – and that’s pretty detailed stuff – in half an hour if you really push it. Another way to look at it is this: complete novices, like me, are invited to the painting party. And, naturally, if you already have skills, you can use all the different types of brushes to create something more special.

The other thing about Moonbreaker that I want to mention is the business model. It’s pretty much a full price game (£25) but it does have loot boxes and a battle pass, although the battle pass is single track and free. It’s the loot boxes that I don’t understand. I thought they went out of fashion in 2022 – even Overwatch, which started the trend, ditched them.

I guess they’re supposed to work like decks of cards, but they don’t, not quite. This is how you expand your roster of figures, and each pack/box contains three figures. There is a currency you can buy to buy packs/boxes with, and there is another type of currency you earn when you get doubloons, and you can spend this directly on figures. There is also a “Guaranteed Legendary” gauge which fills up the more packs/boxes you open. But he looks old and dated, and I worry about what the future of gaming will look like with him.

But, this is Early Access, and ironing out those issues is exactly what this period is designed for. I just hope Unknown Worlds is listening, because Moonbreaker has a lot of potential, and with a few wise tweaks and tricks, it could be great.