The original 16-bit adventures of Sonic the Hedgehog is considered one of the best games in Sonic history and, for my money, among the best games ever made. Since their original appearance, they have been re-released many times, most often little more than emulators paired with stock ROMs. Sonic Origins is different, however: a completely rebuilt sequel to the original 16-bit games using the Retro Engine, the same technology that powered the brilliant Sonic Mania. This release even includes Sonic 3 and Knuckles, a rarity the inclusion of which makes this one of the most exciting Sonic releases in a long time. Sonic Origins has a lot to offer then, but there’s always the risk of problems – and unfortunately Origins has a few of those.

Sonic Origins reminds me of Sonic Jam for the Sega Saturn – the first complete collection bringing each of the original Mega Drive games to a new platform, with a huge selection of bonus material including videos, music and artwork. So it’s basically Sonic Jam 2 – all 16-bit games, plus Sonic CD, surrounded by a wide range of bonus features and alternate game modes designed to expand on the formula.

To explore this material, you traverse six islands: four represent the package’s key games while the others offer bonus features including a movie gallery, artwork and a full jukebox. The entire front-end was created using Sonic Team’s proprietary Hedgehog engine, the same engine that powers many of its games, including Sonic Forces and Sonic Generations. When you launch one of the games, the games powered by Retro Engine are displayed as a surface in the game’s UI. This is an approach we’ve seen in many other retro collections but, in this case , There are disadvantages.

The first and biggest concern is that games are rendered to screen using a bilinear filter, resulting in soft pixel edges. Sonic Mania offers four display options to fix this, including a pair of CRT filters and a sharp scale option, but these options aren’t available in Origins – and the reduction in clarity is significant. There is an option called “anti-aliasing”, but this further degrades image quality, resulting in an unacceptably blurry presentation.

The other major drawback of the front-end is exposed on the Switch version. Here you only get a 30fps presentation and blurry image quality – a far cry from the 4K 60fps on PS5 or Series X. This reduces the overall smoothness of menu navigation on Switch; everything seems slow and blurry. Some of the beautiful animated videos included here also scale poorly on Switch, which is a shame.

Sonic Origins does not have a sharp scale option, unlike Sonic Mania. 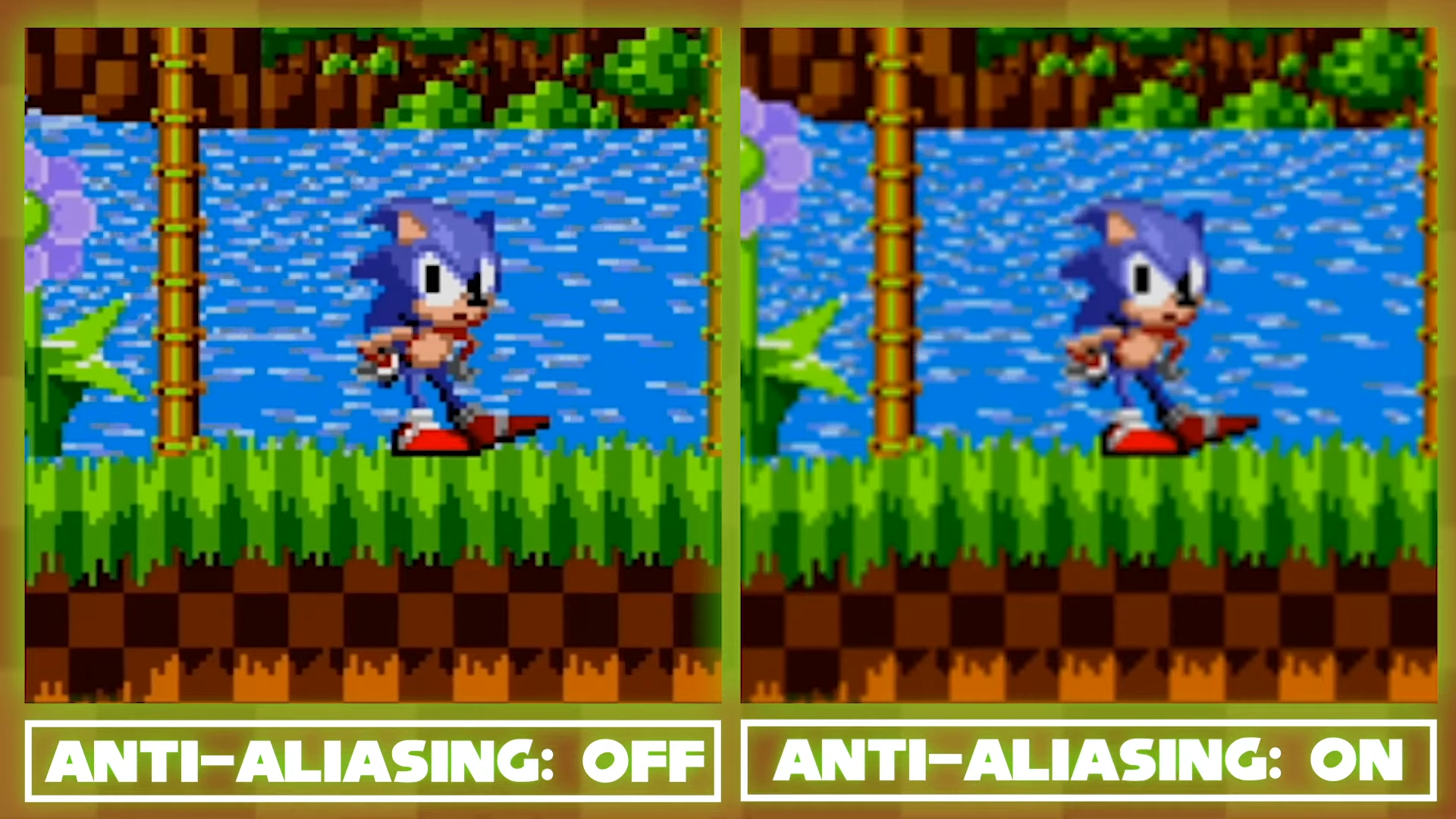 The anti-aliasing setting doesn’t seem appropriate for this game.

There are also other problems. Typos appear on the music list, track names are incorrect, and overall volume levels are way too low – yet Sonic CD’s music videos are noticeably louder than everything else in the game. Sonic CD buries also options, such as soundtrack selection, in its own menu which seems to have been hacked from the original release of the game in 2011 and therefore seems inconsistent. So, while the user interface is attractive, there are some glaring errors that should have been fixed for release. The only good news is that if you’re playing on PC, the modding community has already fixed the biggest problem, restoring Sonic Mania’s display options. We can only hope that Sonic Team listens to this feedback and fixes the issues in a future patch for the console versions.

Fortunately, the games themselves are the main draw and are usually produced to a high standard using the retro engine. Native 16:9 aspect ratios are supported, with higher FOV and tweaked boss encounters to match, and lag is eliminated – a recurring issue on stock hardware. Instead, Sonic is presented at a steady 60fps. Bonuses and special stages also feel smoother, scattered rings fade using alpha blending, and the soundtrack of the first two games has been remastered with cleaner sound. There’s also new content: the Hidden Palace area in the Mystical Cave area of ​​Sonic 2 is now a real bonus stage that replicates the look of the previously unfinished level.

While the previous games are excellent, Sonic 3 and Knuckles are the big addition to this package, having never received a Retro Engine conversion. On the surface it’s a robust port with lots of new features, and the closer you look the more you notice small updates that make the game better than ever – updated water effects on the screen to additional animation frames for bonus rings. Objects that rely on rotation, such as vines and ziplines, have been updated with true per-pixel rotation, allowing for smoother movement, while special blue sphere stages have been updated to match to Sonic Mania with considerably smoother animation. There are plenty of other minor tweaks and changes throughout, making it neatly curated despite some issues that we’ll get to shortly. 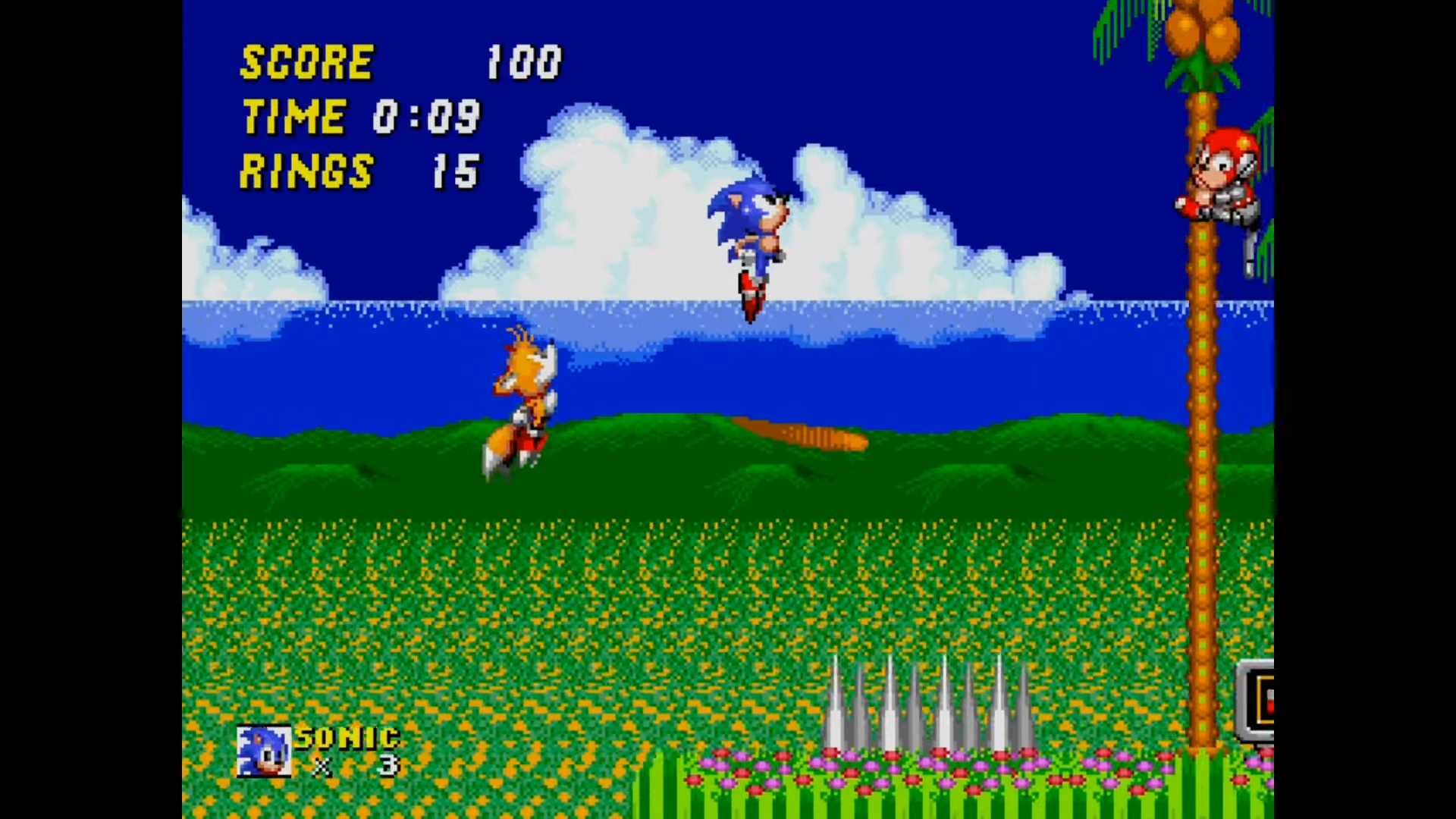 Classic mode gives you a 4:3 aspect ratio and the old life system. 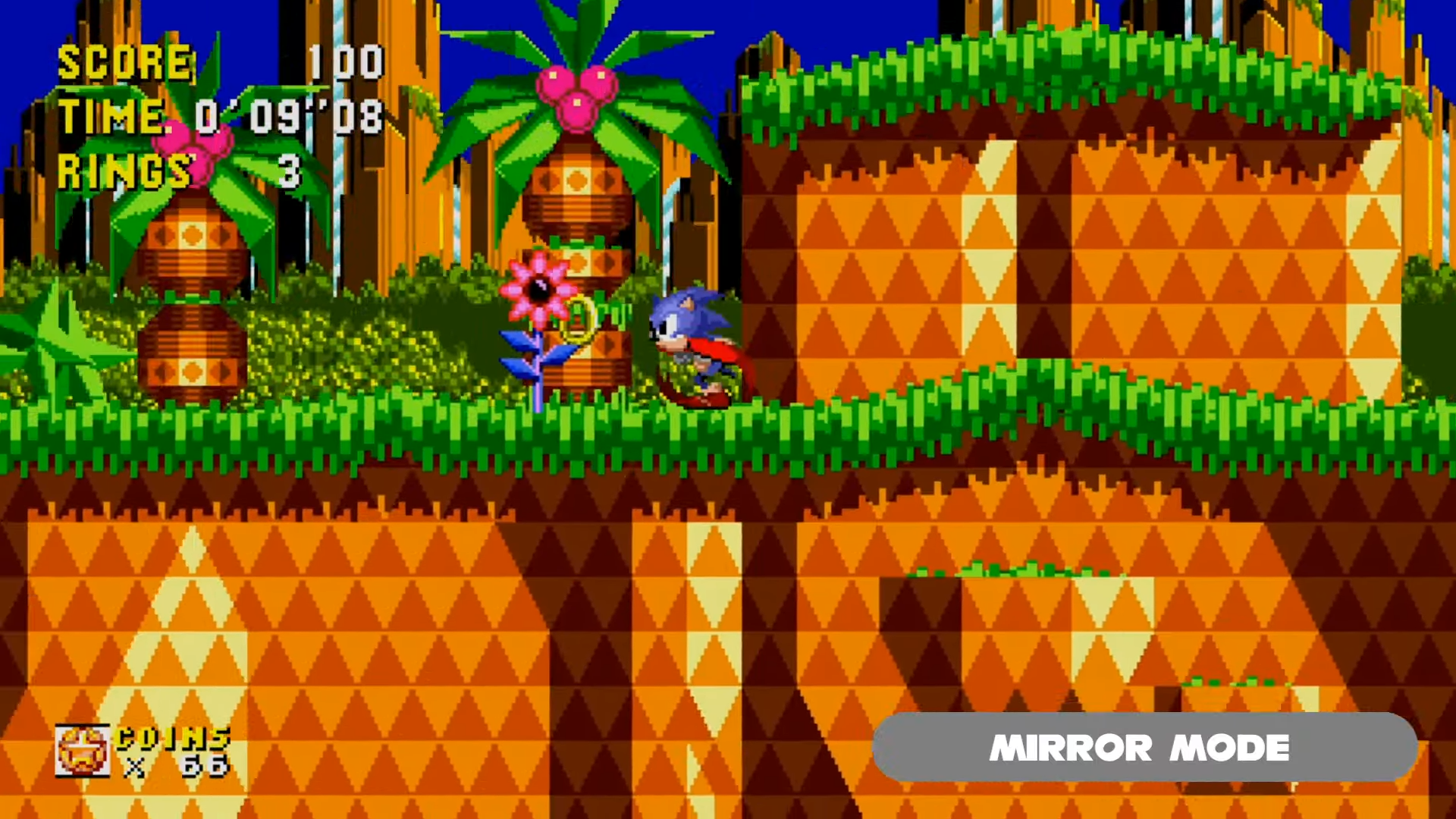 Mirror mode is a fun way to rediscover familiar scenes.

One of the most important changes concerns the music. Much of the Sonic 3 soundtrack was apparently created through collaboration between Michael Jackson and Brad Buxer, but it created issues that kept Sonic 3 from being re-released for years. The solution to this problem for the new version is to replace these tracks with music first found in a prototype version of Sonic 3. These tracks were later used in the PC port of Sonic 3 and Knuckles, where they were rearranged into MIDI tracks. , and now they’ve been recreated for Sonic Origins. I think the new arrangements are a step back from those shown in the prototype version of Sonic 3, but they are still usable. However, the music featured in Sonic 3 and Knuckles is muted compared to the remastered tracks included in the Retro Engine conversions of Sonic 1 and 2, which is disappointing.

Beyond audio, however, all of these ports have received additional gaming features – Sonic Mania’s drop dash move makes the cut, though its implementation isn’t quite up to par, and it There are also mission, suit and mirror modes available. There are also other minor gameplay changes, but nothing as big as the easy and normal modes implemented in Sonic Jam on Sega Saturn, where things like spikes and enemies have been changed. There’s also a classic mode, where you get a fixed 4:3 aspect ratio and the old life system – but you can’t have one without the other.

So at this point, apart from the bilinear filtering, things look pretty good – but unfortunately Origins has a few bugs. Most aren’t groundbreaking, but their number impacts the overall experience. For example, in Sonic 2, Tails gets stuck as you traverse the level, and you hear his jump sound effect repeating endlessly – becoming a massive source of annoyance. In Sonic 3, the arrival of the third stage mid-boss causes debris to fall from the screen, which continues until you die or enter a special stage rather than stopping when the boss is defeated. Later in Marble Garden Zone it is possible to outrun the camera and die. I could go on, but the thing is, this game lacks the fit and finish we’ve seen in other Retro Engine-powered projects. 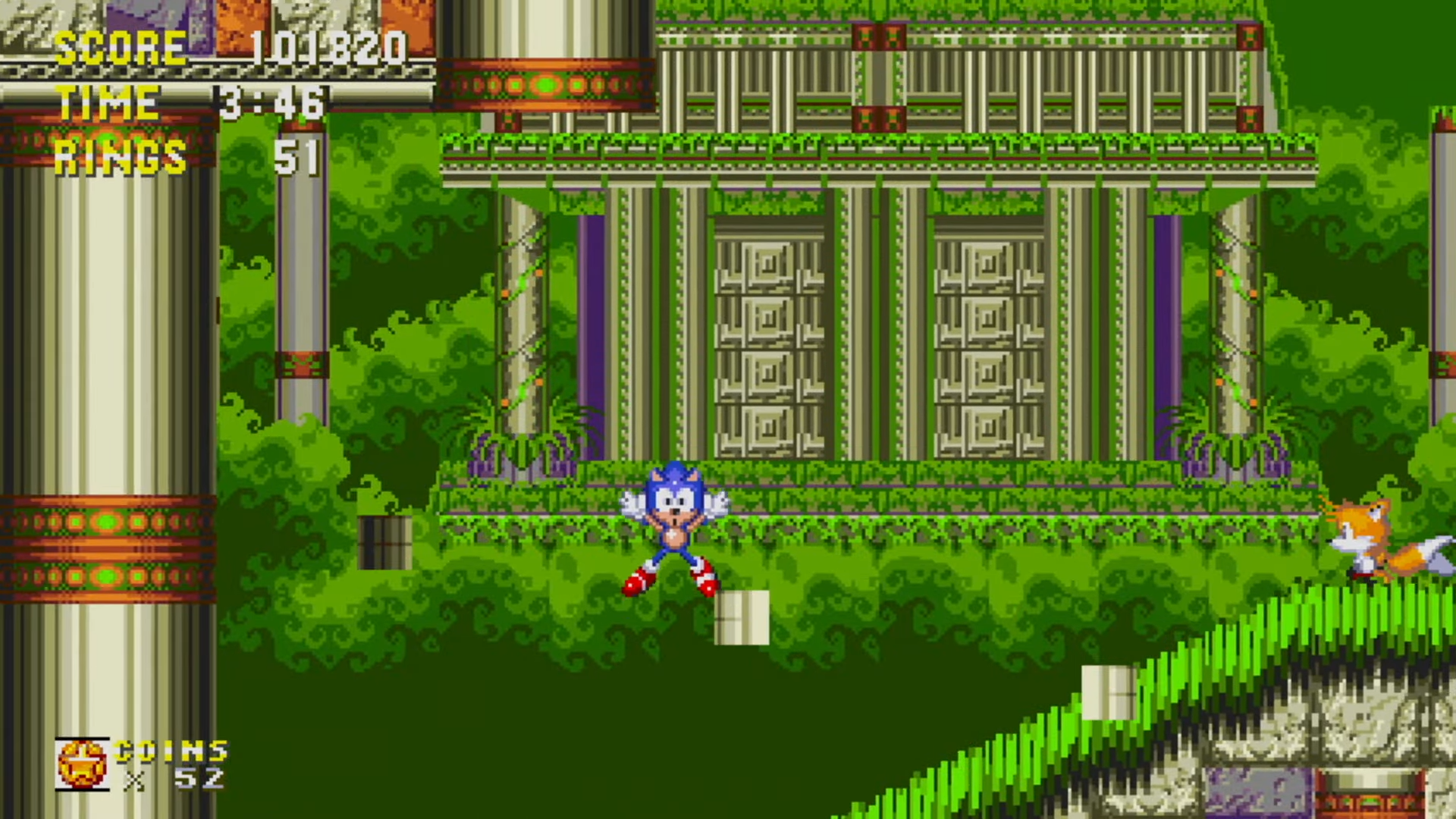 So where does this leave us? On the one hand, the glitches and presentation issues are frustrating – it feels unpolished in a way that’s hard to ignore entirely. Still, they’re still full Retro Engine ports of the classic Sonic games, making it one of the most interesting re-releases to date. Personally, I have no use for emulation in this case, as I will always choose the original cartridge builds, but the wider aspect ratio, upgraded special stages, and bonus content make for a great time – not to mention the very low input lag.

If Sonic Team can fix those technical issues, Origins would be easy to recommend, but with its issues and high price tag, it’s a tough sell. Really, it feels like Sega needs to slow down a bit – the last three retro re-releases all shipped with technical issues that should have been ironed out before launch. They risk burning their customers with products like this and hopefully they start to realize that before it’s too late. Sonic Origins might have been the best compilation yet, but as it stands, there’s still work to be done.