Walk past a pub in Lewes, the quaint county town of East Sussex, and you’ll probably hear the thudding, rhythmic sound! of brass striking the lead. Pause for a moment – perhaps gaze out a dusty window – and you might catch a glimpse of the glint of metal as heavy copper coins shoot through the air to land, several meters away, on the soft, sloping surface. from a small table. Snap! It’s Toad in the Hole, or just Toads, a pub game that’s a cross between darts and little winks. As sure as you’ll find Harvey’s on tap, you’ll see a hidden toad table in most Lewes drinking establishments – as well as those in the many surrounding villages.

It’s hard to say exactly where the toads started – a 1950 Pathé newsreels notes its Elizabethan roots, although the table played in this film (then set in Surrey) includes an ornamental toad carving on top seen in some European versions. Seems to be played a bit in Spain – where it bears the name”rana game“, game of the frog – and also in South America – where it is “juego del sapo”, game of the toad. Here in England, however, its popularity as a pub game is very much based on Lewes.

But times are changing. In 2021, Brighton created its own league, as a flurry of toad tables appeared post-lockdown in pubs across the city, sparking new interest in the game among a younger generation. It is against this backdrop, and after an unprecedented two-year hiatus, that 2022 has seen the return of the Toad in the Hole World Championships, the game’s annual elite tournament. For local Lewes players, the event represents, as always, a chance to compete at what is warmly described as an “international” level. For their new rivals Brighton, however, it’s an opportunity to flex their fingers and thumbs on the world stage for the very first time, challenging the locals to the crown on their home turf. And for me, replaced at the last minute, it was an opportunity to see the experts in action.

A well-used toad table, found at the Lewes Arms pub.

As a beginner, simply laying your toads – heavy, hot brass coins in hand – on top of the table is a solid achievement. Thrown slyly two meters away, each toad that lands on the top of the table is worth one point. But it has to land squarely on top – if it slips or hits the wooden back of the table, it’s “dead” and worthless. Put your toad in the hole in the table and you earn two points – and you can also fetch your toad from the small drawer in the table below. Opening this drawer is a little ritual whose novelty has yet to wear off (and you still get your own Toads, wherever they normally are on the floor).

Scoring works from 31, like darts, with four toads thrown each round for a maximum of eight points if – and that’s a big if – you were to put all four in the hole. (Throwing an eight is such a rare event, Lewes players have a separate spreadsheet in their league to track the feat.) Go over 31 and you go broke, and your turn is zero. Beyond that, it’s all a matter of technique. Do you launch with the toad placed between the thumb and the index, or posed above? Do you try archery, like a frisbee? Are you aiming for the hole or just ahead, anticipating the toad’s momentum?

A lot depends on the table itself, and one of the most interesting things for me when I started playing was negotiating the wide variety of tables on offer. The lead top is deliberately soft to cushion the brass toad’s landing, but that means the surface is perpetually bumpy, with deep gouge marks and scrapes from previous throws, soon leaving tables warped and scarred. Some tables end up pitted with craters, like the surface of the moon, while others are battered more thoroughly until they warp wildly, with volcano-like calderas that must be countered by game. Accurate throwing here, especially where the edges of the hole have been pushed back and widened over time, makes it easy to get two points – but the sloping surface leading up to it makes any loss of accuracy hasty.

The tables used at the Toad in the Hole World Championships (or simply “the Worlds”) are particularly important. To preserve both their surfaces and the fairness of the game, they are locked up all year round until they are used. Indeed the announcement that the local bar at the Beak Brewery in Lewes would be borrowing a few of these tables for a social session the week before Worlds caused a small kerfuffle, with some local concern these would be investigated and practiced by professional players looking to gain an edge. In the end, the Worlds tables were not used and replacements were purchased instead. 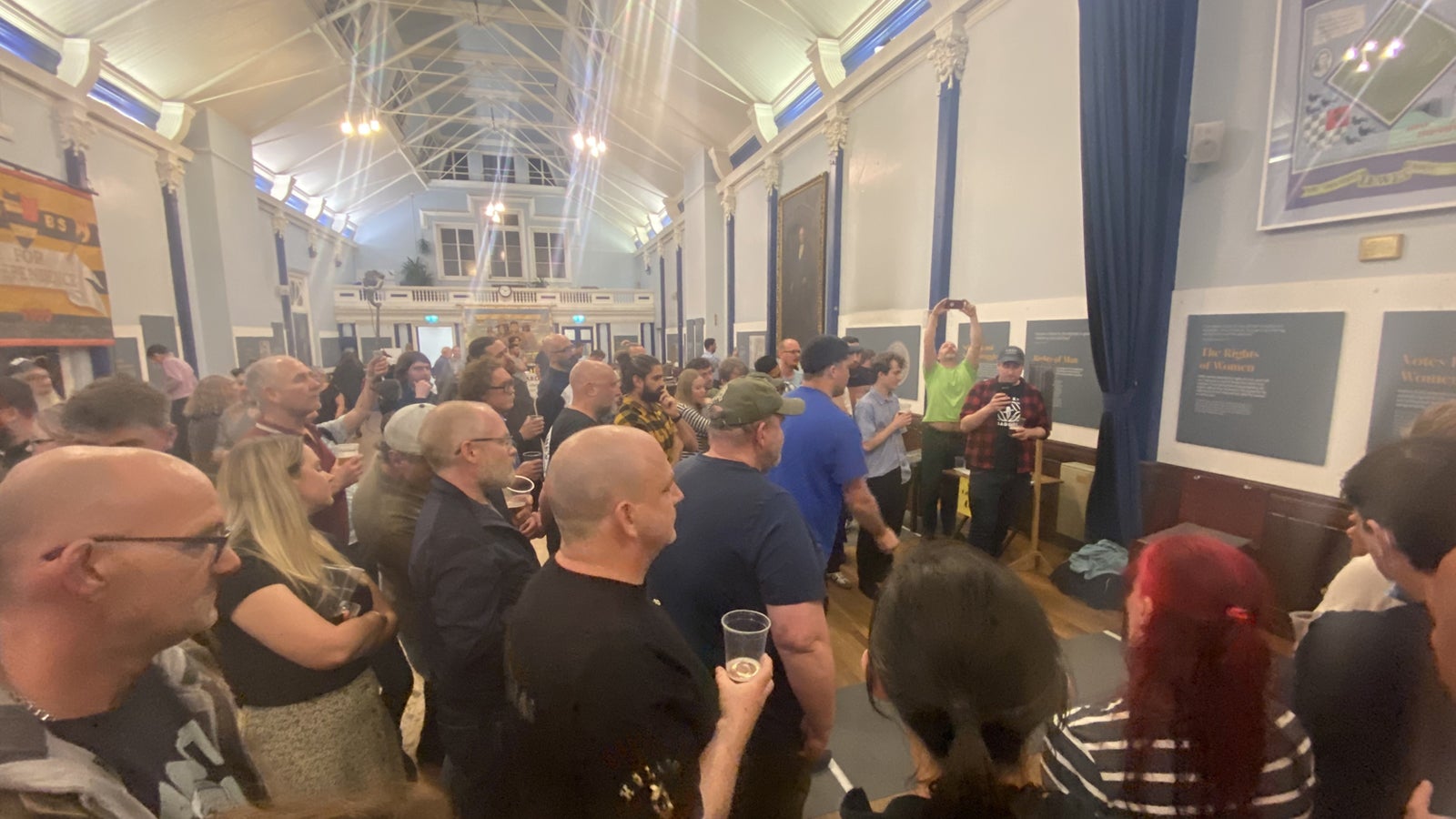 2022 The Toad in the Hole World Championships.

48 teams took part in the Worlds themselves, almost all from East Sussex – and with several new teams from the Brighton scene. Not all teams were drawn from local leagues, some brought together by local pub staff or old friends. A few have traveled from much further afield – including a team from Didcot and a long-established group from Lincoln who imported a table from East Sussex several years ago. Ahead of the event, there were several favorites – defending champions Rodmell, the side from nearby Lewes village who last won Worlds in 2019; a Brighton group made up of players from several top teams; and the Lewes Black Horse pub team, former winners and possibly the hottest prospect in town.

Along with a friend of an injured friend, I was lucky enough to step in as a ringer and play for another Lewes team, and together we valiantly put on a good performance – but not enough to get out of the phases. of groups. Meanwhile, the first clash of the night had just happened – defending champions Rodmell had been dramatically eliminated by Brighton’s group. Clearly, Brighton was synonymous with business.

As the evening wore on, the teams were whittled down until play reached what would be a crucial semi-final: Brighton v Lewes’ Black Horse. The Brighton side played well and the scores were tight throughout – but the Lewes side took the win. From there, with Brighton gone into the night, a remarkably friendly final with another village side quickly concluded, leaving the Black Horse winners and world champions again.

“Sometimes in the toad world it’s a toss up,” Declan Rowell, owner of Black Horse and captain of the toad team, told me the next morning. “Whoever wins the toss gets it and that’s how Brighton knocked out Rodmell early on. They were even stevens throughout and both needed a four at the end – and that’s just the person who pitched the four first, because they won the pitch. But it was a huge shock and it did us a huge favor, because Rodmell was definitely our bogeyman. As it stands, the whole team played as a team. We threw good toads – I threw a seven – but it was a team effort that got us over the line.”

Of Brighton’s new wave, Rowell was impressed – and said he expected them to come back stronger next time around. “It’s a matter of time before they win,” he continued. “They’re a young team and they didn’t have the experience of playing at the World Championships, but getting to the semi-finals on their first real attempt was phenomenal. They’ll come back strong, they’ll learn a lot from last time. But they will have a big test to win next year because we are the defending champions.

“We celebrated until 3 a.m. last night,” Rowell concluded. “Then I think we’re going to take a toad around Brighton and investigate all these new tables that are popping up. Because it’s time we learned how to play at their tables and what the rooms are like.” The fight for next year’s Toad in the Hole World Championships is on.