“The world doesn’t revolve around you” is the biggest lie you will ever be told. You are your world. Everything you see, and how you see it; everything you think, and how you think it; everything you do and how you do it; everything combines to produce a perception of the world – the only perception of the world that you have – which never existed before your birth, and will never exist again after your death. Then there are the footprints we all leave as we move through the world, both literal and metaphorical. Some surfaces give way to our weight because we shape the very ground we walk on. On a larger scale, we all build and break each other’s personalities through our interactions; we create ourselves. On an even larger scale, we are building and (unfortunately, more often) destroying the planet itself, altering it in ways that could never have happened without us.

“The world doesn’t revolve around you” is the biggest truth you will ever be told. Countless yesterdays have passed millennia before you were born, and tomorrow will come whether you are there to see it or not. Of the approximately 8 billion people alive today, the percentage of people who will never know you exist is so high that in any other circumstance, you would round it up to 100%. Even on the immensely larger scale of humanity itself, we are not as important as we like to think. There is no rational way to deny the impact we have had and will continue to have on Earth. However, when the last of us is gone – whether through our own arrogance or otherwise – the planet will remain. It will continue to grow and evolve.

I hold these two truths in my head without conflict. We all do, I think. I recently spent some time playing Cloud Gardens, which serves to support both views, and even put a positive spin on the latter. In order to explain why, I must first talk a bit about Cal Flyn’s book, Islands of Abandonment, which I just finished reading.

Flyn’s book discusses different types of abandonment, including people who have abandoned society and people whom society has abandoned. It’s also largely – for the first half of the book, at least – human spaces that have been abandoned by people and reclaimed by nature.

One of the biggest lessons I learned from this book is how quickly such places – homes, factories, entire towns – can feel abandoned for decades rather than a year or so. of them. When given the chance, nature sweeps through our metal and concrete hives with awesome and unstoppable speed and power. Flyn even records instances of incredibly rare flora and/or fauna appearing in places where there were no signs before. I don’t pretend to understand how it happens and, to be honest, I’d rather not know.

Nonetheless, reading Flyn’s detailed accounts has given me insight into the speed, complexity, prevalence, and significance of such events. Over all. maybe that lent me some of his hope. His hope that the planet is not yet unsalvageable; his hope that in the battle between humanity and nature, there is no need to be a beaten and broken loser.

I first played Cloud Gardens just a day or two after finishing Islands of Abandonment and, to be honest, that’s why I didn’t like it initially. For a while, this actively pushed me away. The fundamental concept of Cloud Gardens is that the player scatters human detritus in a diorama – electronics, furniture, vehicles, structures – and various plants and trees use them as catalysts to spread and grow. My problem with the game was twofold: the player must also add and harvest seeds, and the player must reach a certain level of growth in order to progress to the next scene. They have to solve a puzzle. 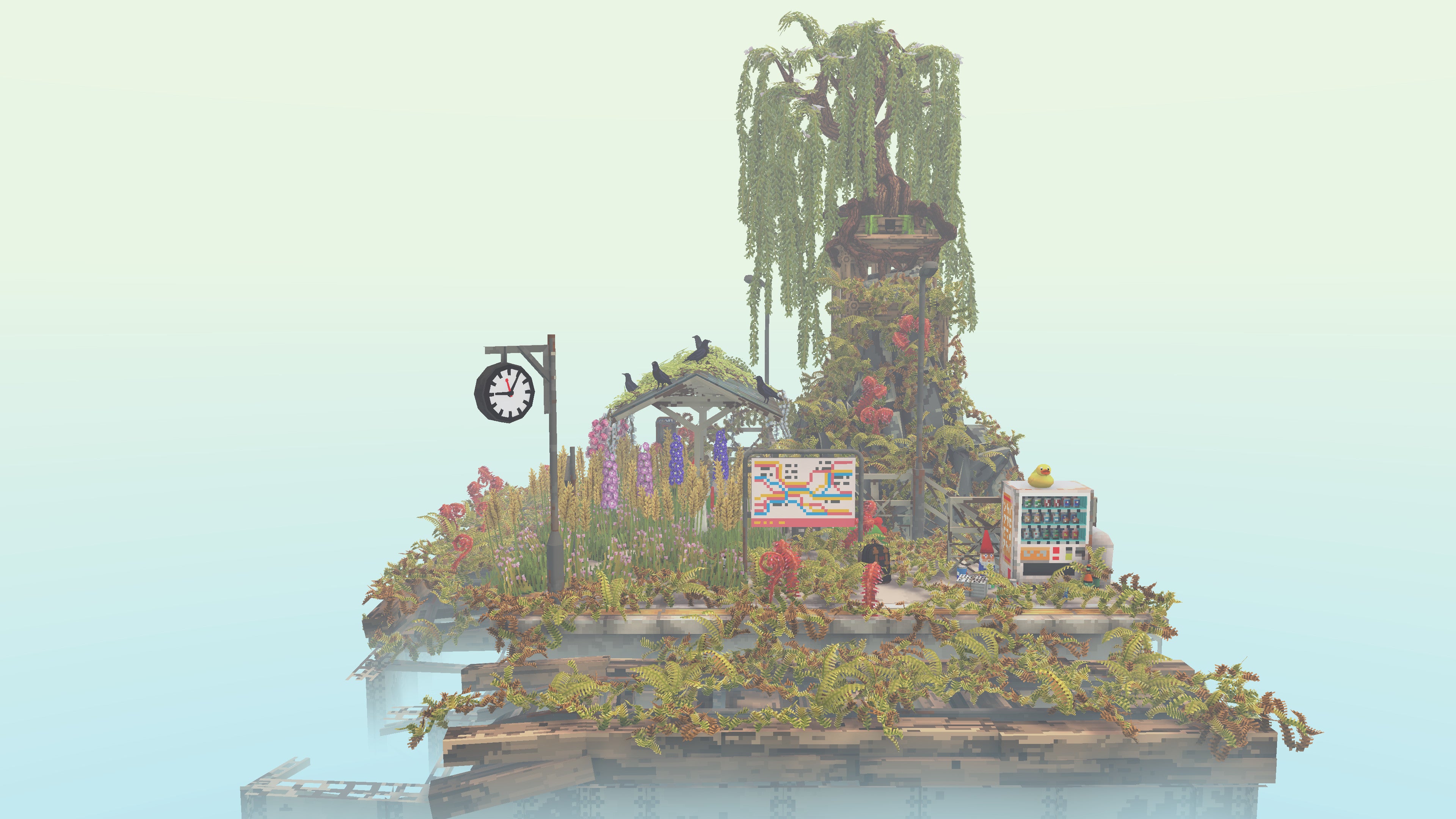 What a beautiful game.

Flyn’s book – at least in the parts about areas reclaimed by nature – details the beauty and wonder of what happens without human interference. Yet this was a game ostensibly mimicking this process, while requiring the human intruder to not only add unnatural decoration, but direct the actions of nature itself. I hated it; hated with an intensity that surprised me.

But then I realized, regardless of the fact that any game requires some level of interaction, that’s a good thing. It’s slightly educational, to begin with. After all, the vines, plants, and trees really do crawl over, under, and through human detritus the way Cloud Gardens does. It also satisfies the human desire for a sense of control and ownership, combined with an appreciation for the beauty of nature. How on earth could anyone criticize that, especially in an innocuous digital sphere?

Where the game really came to life for me was in the directionless creative mode – especially when I discovered the magical and delicious “unlock all” button in the menu. Here, too, I have to do all the heavy lifting for nature and the waste thrown away by mankind. Still, without a series of puzzles, without a set goal, I really don’t mind. I go through the creative stage largely on the sidelines, eagerly awaiting the end result. 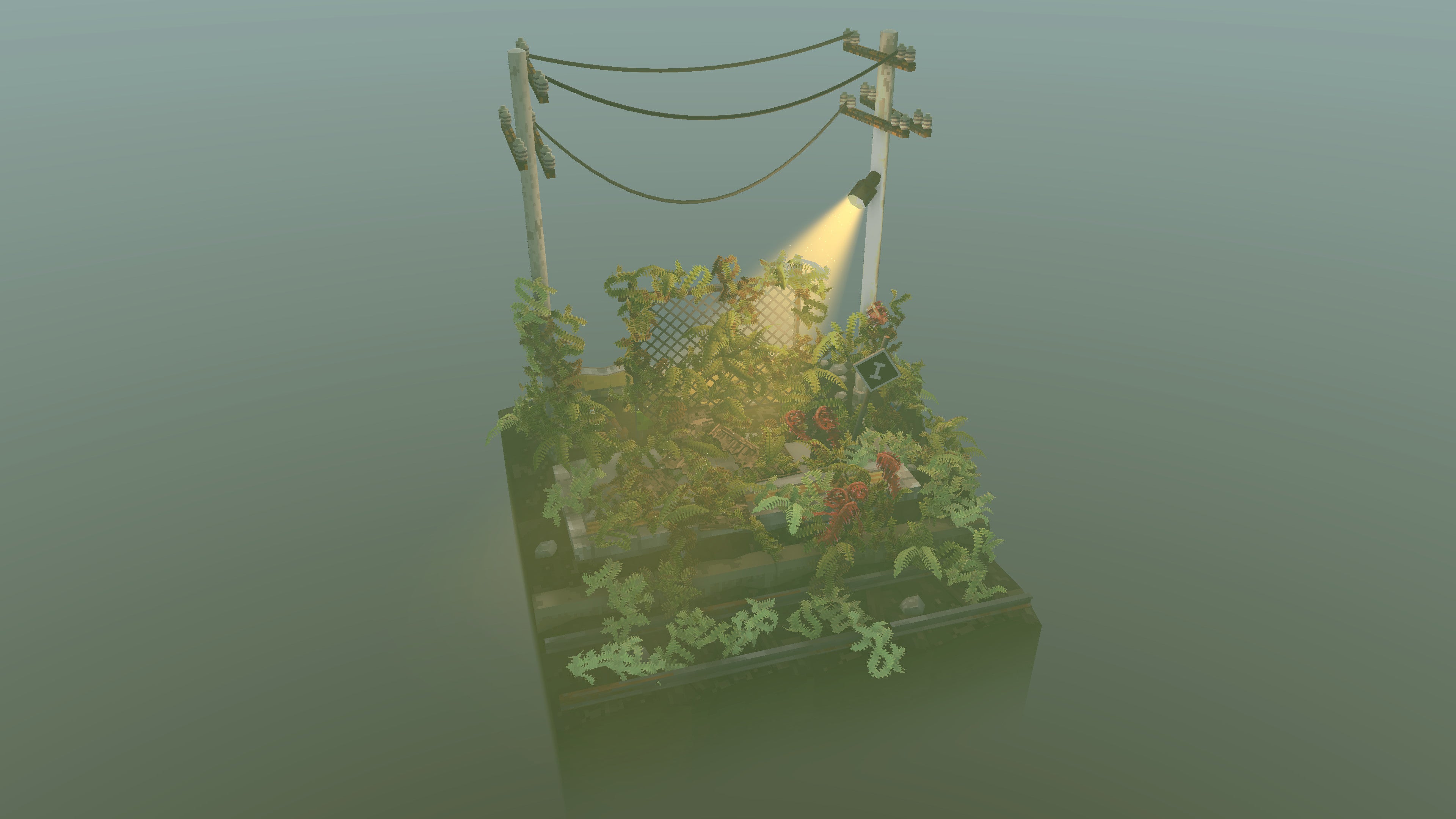 The lighting is wonderful.

I look at my creations – the caravan sitting in the shade of messy trees, the furniture almost hidden in a wild vegetation of vines and grasses, the skeletal factory strung in greens and yellows – and I see a glimpse of a world abandoned by humanity. Maybe even a world that survived him. And I don’t feel sad, I don’t despair. I feel serene. I also feel a tinge of satisfaction from my part in creating it, despite my determination to emotionally distance myself from the creative process. A hypocritical and paradoxical position. Typically human.

Maybe I can muster some integrity by revealing that I also like opening creative mode, and then… doing nothing. Just watch the ubiquitous birds dive and flit among the clouds, waiting for a duet between humanity and nature that will only be sung if I want it. Games can be great for playing and great for creating. Sometimes – just sometimes – they can be perfect for just being.