At first glance, it’s hard to tell if Warner Bros. MultiVersus, a fighting game similar to Smash Bros. featuring various Warner-owned characters like Batman, that yellow dog from Adventure Time, and Shaggy, is more of a quick hustle that piggybacks on misplaced items. metaverse hype, or a video game actually quite fun. Anyway, we were equal parts intrigued and horrified by this latest trailer, so we played a bit of its closed alpha in our spare time and honestly, we still don’t know what to make of it. So we decided to discuss and figure things out.

Martin Robinson: So multiverses are all the rage now, I guess? I just went to see Tout Partout Tout at once over the weekend, which was great! And then I just played Warner Bros MultiVersus, which is also a thing…

Martin: It’s the badger! It’s a fairly simple concept to grasp, although I hope you don’t mind my being reductive – it’s Warner Bros. does Smash Bros. with its large amount of IP. Did they miss a trick by not calling it Warner Smash Bros?

Chris: They did, but the lawyers probably wouldn’t have liked it. The first thing I get from this game is “lawyers”, actually. Somehow this game feels more like IP than usual, even compared to Smash or Marvel vs Capcom or something like that. It’s my least favorite so far – but there are things I love!

Martin: Yes, of course – it’s much nicer than I had first imagined. But before we start saying nice things, it’s worth pointing out how much it really looks like IP: The Game, without giving too much thought to its consistency. Which is part of the fun, but it reminded me of those incredibly bizarre cameos in the Space Jam sequel like the Droogs from A Clockwork Orange and a nun from Ken Russell’s The Devils. It’s a bit rude I guess and using the IP for fun.

Chris: Right, it feels like there’s at least as much out there because of the Marvel Cinematic Universe and Fortnite (which also featured in each other?!), as there is Smash. It’s like Smash Bros. was the execution, but the idea that came first was: how can we cross-reference our IP, because clearly there’s a lot of dirty money to be made out of it. Thank you also for justifying my decision not to watch the Space Jam sequel.

Martin: Oh buddy. So you don’t know what happens at the end? I won’t spoil it here but it’s ok (don’t worry, I didn’t watch it – I just read the synopsis on Wikipedia, which is how I consume most media these days).

Chris: The Donlan School of Film Studies! Hopefully it ends with Tom off Tom and Jerry spanking Batman off the field with a frying pan because that’s how most of my games have gone here.

Martin: Despite my sniffles – I’m usually a sniffer – it’s fun to watch Superman fight Velma from Scooby Doo. What always sets Smash apart is the detail and love for the source material, and while the detail in MultiVersus isn’t quite as polished, you can at least feel that underlying passion. It’s a silly thing and he knows it, and has fun with it. 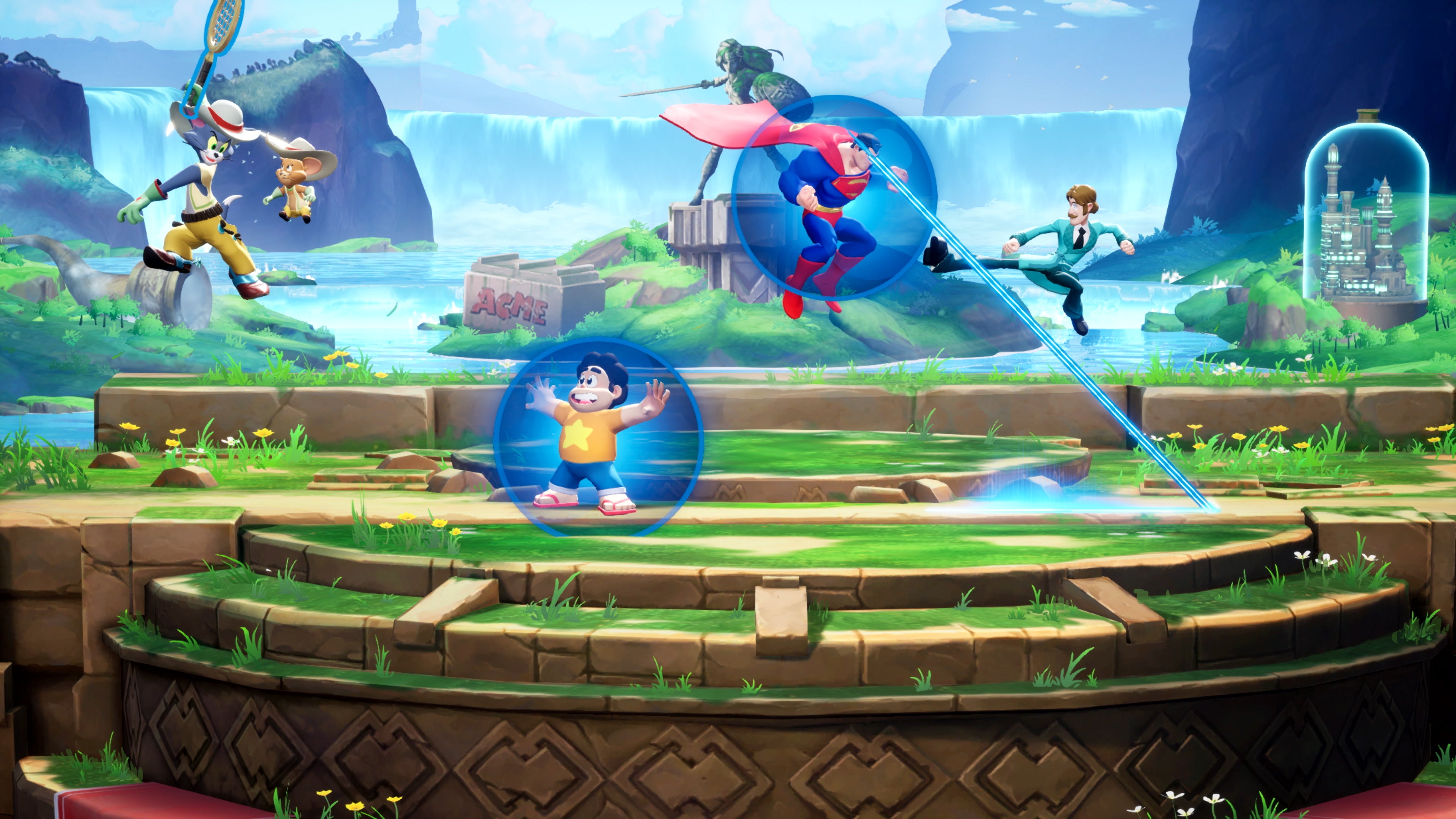 Chris: Yes, there is something here. I think what’s missing are all the extra things beyond the Smash characters – the hazards and the stage designs and the items, which I know divides this community, but those things all add a bit of texture. But the actual characters I think are pretty well done? I played a bit of Taz the Tazmanian Devil (my favorite Loony Toon growing up, don’t ask why because I don’t know) and he was awesome! I turned someone into a roast chicken by repeatedly pouring salt and pepper on it, that’s the good thing here. (And seriously, that’s also where there’s some real depth? The characters play really differently, there are discernable classes, including Support because this game is actually more about co-op and l team than freedom for all. Taz has a whole playstyle built around how seasoned enemies are…)

Martin: Who doesn’t like Taz? For some reason I went back to the Mega Drive Taz-Mania game recently, because it’s the kind of thing I like to do with my weekends, so it was also one of my top picks (after Superman, of course). And similarly, I was very pleasantly surprised by the depth and variety of the initial roster, as well as the amount of playstyles supported. I think what impressed me the most, though, is how distinct it feels from Smash Bros. -op and team play with support roles, buffs, and something as simple yet profound as being able to attach to your partner to keep them from being smashed off screen.

Chris: I really liked that idea, it completely changes the way you think about it because all of a sudden you have to decide if you should prioritize support and leave the “dps” (usually Arya Stark and her weird pies. ..) or just crush the dps. It’s also smart because it’s probably a game kids will want to play, and now parents can join in without having to accept that at some point you’ll beat your child for first place. I know you can 2-v2, but in terms of proper support classes and building around co-op, that’s probably the only thing Smash lacks? Big fan.

Martin: You guys now make me feel bad for the number of times I wiped out my 8 year old nephew playing Smash Bros.-

Chris: Don’t feel bad about it, he has to learn. Martin: Haha! But yeah, it definitely feels like MultiVersus’ special sauce, and the way it’s supported by various systems gives matches a real flavor of their own – I love it when an enemy character is on the verge of a knockout and whether you’re trying to gang up on them, or conversely be that person who’s about to be destroyed and play a chase game around the level while your partner supports you.

Chris: Yeah! This stuff is great. I wish there was a bit more variety in the environments – they’re all basically that central scene from Smash Bros. with the ground plus some side platforms – but that’s just an alpha and all that. Is it also quite forgiving in terms of side drops? I wonder if this is another game for the slightly younger audience, because it’s one of the hardest learning curves when you’re totally new to this type of game, learning not to just walk over the edge and die. But it puts a bit more emphasis on racking up damage on someone and landing a smash, rather than the platforming side of things that come into play in Smash Bros. These are slightly smaller things compared to the more egregious things, which as always with these games is monetization.

Martin: Yeah, of course it’s worth pointing out that this is a free game, and I’m not entirely convinced how it’s going to work. There are caveats in that the store isn’t open and we don’t have full visibility on how this will all work, while after only a few hours of gameplay each, we don’t. We didn’t mind the higher tiers of the battle pass unlock, but the very fact that perks that are used to power up your characters can be purchased will still make me feel a little uneasy.

Chris: The battle pass seems a little stingy – after a few hours of online play I don’t think I’ve gone up a single level – but as you say it’s very early to tell. There’s also quite a bit of general “metagame” (blergh) stuff about MultiVersus that I’m still waiting to figure out. It’s not brilliantly explained, in the metagame or in the game itself – I didn’t even know what gave me points in free-for-all for a little while – but hey, it’s true to the genre. In the end, it’s just a lot of fun and quick to figure out. I’m addicted to Tom and Jerry, who are like a mix of Ice Climbers and Solid Snake? Work out the levels and the character roster and hopefully bring back all the cringe-worthy progression and I could actually play it with friends.

Martin: Yeah, that’s the thing – I went into this expecting to laugh at the ridiculous, but now I’m kind of looking forward to the floodgates opening in the next part of the closed alpha test so that I can tinker with a bit more. It does more than enough to set itself apart from Smash Bros. to make it worthwhile, and it does enough with the characters on offer to have surprising depth. I can’t imagine sticking with it for too long, but the very fact that I’m ready to play it again is surely a good sign. I still won’t quite understand some of the characters on offer – are the Droogs part of the first wave of new content?